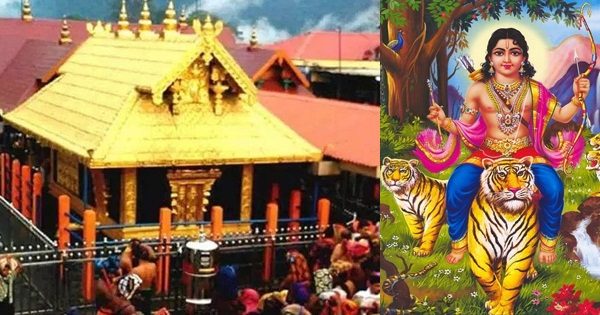 Sabarimala Temple is a sacred space in Kerala, with its serene landscape and a spiritually-profound abode of Lord Ayappa – a living deity, peacefully practicing His ‘naishtika brahmacharyam’ (eternal celibacy). This centuries old tradition finds mention in a scripture called Bhootanatha Upakyanam. The temple is deeply embedded in the science of energy principles, the science of tantric rituals and customs. It has been the epicenter of a deadly flashpoint of sorts in the courtrooms, on the streets, on TV debates et al.

The temple’s very principles, its traditions, its customs, the ethos are being brutally attacked and questioned by a motley of ill-informed, determined, well-funded, well-networked lobby of Marxists-Communists, left- liberal cabal of Secularists. This cabal ensured that the Sabarimala verdict declared on Sept 28, 2018, by the Supreme Court, in a 4:1 majority verdict, lifted the ban and set aside the centuries old practice that bars women aged between 10-50 entry into Sabarimala temple.

The Supreme Court emblem has “Yato Dharmastatho Jayaha”- meaning ‘Victory follows where righteousness prevails’ . The only dissenting judge – Lady Justice Indu Malhotra- stated that what constitutes an essential religious practice is for the religious community to decide and not a matter to be discussed by courts. She added “notions of rationality cannot be involved in matters of religion by courts” which makes us appreciate why Sage Apasthambhaa said that Women are the custodians of dharma.

The left-liberals and communists imagine that they are the repository of progressive rulers, are the harbingers of democracy and secularism to unruly, superstitious believers of the masses. They decide that this temple is based on mysogeny, anti-women, patriarchal and hence the culture and history needs to be de-brahmanised. They have taken a position as a representative of the entire female community, talk on behalf of temple, the deity, the believers without having a clue of temple’s history or its existence.

The judgement was the cumulative effort of a sustained manoeuvring and pressure tactics adopted by the self-styled feminists and gender-equality Secularists. The Marxist-Leftist- activists gleefully found their pervasive agenda in Sabarimala, a grand reason for needling Hindu traditions in the pretext and garb of gender inequality /discrimination against women in the places of worship. Rights of these people who question every practice which is central to the character of this institution, claim to worship this very deity.

This parasitic generation of Marxist nation-breakers have descended on this field to do a lasting damage. Their ideological air of haughty supremacy, passing judgements on things, they know nothing of, take great pride in their opaque ignorance.

How unscrupulous can this cabal be, is another story for another day !!

Sabarimala needs to be analyzed in terms of the law of relativity. Certain concepts especially the ones concerning Hindu faith and rituals, are seen differently by one set of people. Without understanding the nuances, terming it as outright gender discrimination is nothing but idiosyncrasy.

Origins of such rituals and sacredness of such principles bear their weight on immense knowledge that ‘stala puranas’ (temple history) offer, where even a seasoned Sanskrit scholar might find it difficult to decipher the science of temples, science of energy principles, the science of Tantrik rituals. These extraordinary shastras are specifically applied to maintain the sanctity that governs the temple of Sabarimala.

Every person is a form of yantra- an energy field and he who partakes in the 41 days vrata, modifies his physical being and predominantly his mental state to collude with the energy field of Sabarimala. Again it is not as simple as it may sound. Any disturbance or instability of the mind adversely affects the particular and unique energy field of Lord Ayyappa at Sabarimala. A menstruating woman carries a powerful yantra which is exactly the opposite energy field as that of Sabarimala and any blunder committed in bringing it together will deplete Lord Ayyappa’s enery field and eventually destroying it.

Thus, the Supreme Court failed to see the traditional Indian viewpoint and wanting to seem politically correct, had a pre-determined notion that India is a secular state and so should be viewed as godless state as against a state that accepts all Gods. Hinduism cannot be homogenized as there are multitude schools of Hinduism which have vast differences from one another and the highest court using one single brush to sweep over the other schools of thoughts of Hinduism, shows the complete lack of understanding on the part of the honorable judges. The problem arises when the court applies the principles of ideas of faith to other schools of Hinduism.

All in all, it is the prerogative of us Hindus, to see that the courts do not have predispositions by placing arguments whilst working towards advocacy.

A nine judge appointed constitution bench is still waiting to hear the case of Sabarimala at the Supreme Court.

Geetha Sharma is a work from home stock trader, Bharatanatyam practitioner (having performed in ICCR dance festivals), and a content writer on Dharmic causes.