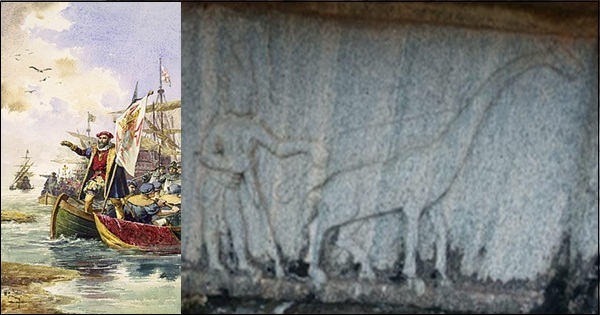 Route taken by Vasco Da Gama (in Black colour) and the trade route (silk route) that Indian traders were using, as per European Historians (in Orange and Green). As per these history twisters, Indians did not know the route between Africa and India. Indians also sailed along India/Pakistan coast to reach Oman. (This point is to discredit Indians, as Deep sea navigation was the biggest hurdle for Europeans). 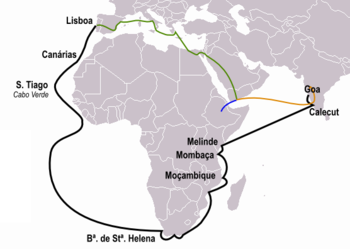 It is also inferred that, Vasco Da Gama was a “visionary, pioneer and a great discoverer”.

Actually this is the greatest “Lie” that has been told to Indian kids to brainwash them. Let us look at the proofs that holds Vasco Da Gama sea route discovery theory a myth!

Please see the message in the box. They are saying, they have no “citation”. Why not produce the evidence? Absence of evidence, suggests that, the claim , “Portuguese discovered sea route to India” is a bogus and empty claim. Why there are no evidences for such a wonderful accomplishment? Don’t we need to ask this question? After all Vasco Da Gama did sail from Portugal and landed in Kerala. There is no dispute to his travel. Why not produce the evidence?

Fact of the matter is, there is enough evidence for Vasco da Gama’s travel. In fact, the evidence speaks more than his journey. So, it is not produced to Indians. There are ample evidences that Vasco Da Gama did not discover sea route to India. Here is one such important counter evidence.

1)  Note the date of Vasco da Gama landing on Indian shores. It was 20th May 1498. Now look at Moodabidari Town (Near Udupi) in Coastal Karnataka. In this town, we can visit a famous monument called 1008 pillar Basadi (also called Tribhuvana Tilaka Chudamani Jain Temple). This is a Jain temple. But the land grant and finances were arranged by “Hindu” Vijayanagara Kings.

The temple construction was started in 1430 CE. Construction was finished by 1496 CE and was opened for public. The temple is functioning even today. The dates are engraved in the temple inscriptions. So, there is no dispute. All the sculptures, especially the ones on the foundation stones are without doubt, pre-existed by the time of Vasco Da Gama’s landing in India. Now let us see , how the ‘proof’ from this temple disprove that Vasco-Da-Gama was the first to undertake deep-sea-navigation. 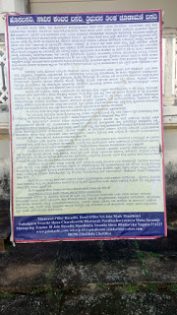 Description of the place with construction dates in the above image. The details are extracted from the old Kannada inscriptions that are spread out on two big walls on either side of the Garbha Gruha. The plaque was put up by the Jain Math that exists next to the temple. 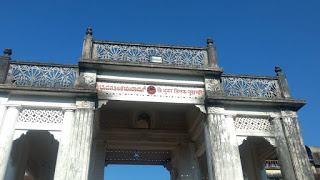 Here are interesting sculptures at the base of the temple:

Sculpture A – A foreign soldier 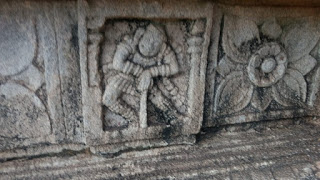 The picture depicts a Roman warrior (from whom, European soldiers were represented). This is evident from the “Leather” Armour and head band.  Hindus and Jains were opposed to killing of cow and associated animals (like buffalo). So, they never used “Leather Armoury”. For comparison, Indian soldiers from the same temple is given below. It shows, a commander (or leader), a Bow man and a swords man. 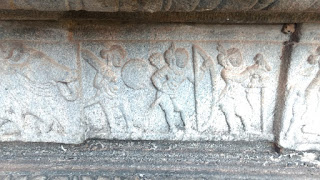 The Portuguese discoveries monument, Lisbon, Portugal, depicts soldiers with short knee length robes too. The European Centaur was also sculpted in the temple. 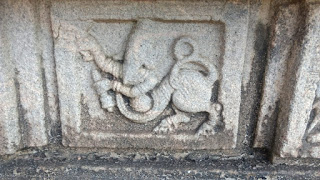 Not Just Centaur, other mythical animals used else where in world were also sculpted in this temple. Probably, Indians were looking forward to bring them to India, so that, they could be trained as war animals. 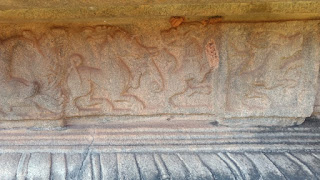 Only Giraffe was shown with an attendant.  This clearly shows, Giraffe was captured and brought to Vijaynagara empire. All other mythical animals were sculpted to train navigators to seek and capture those animals. We can identify Ganda Berunda (Mythical two headed Bird with elephant in its cusp), Horse with Elephant tusk (Horse + Elephant power combination), Lion that can breathe fire (Lion+Dragon power), Horse that can breathe fire (Dragon + Horse combination). These animals may be myths that were rumored to scare away invaders.

2) Well, since Indians traded via land route, it is not a big deal to know European soldier. After all, Alexander came to India via land route. 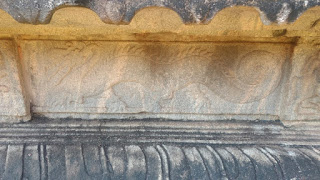 A Chinese Dragon sculpted in the 1008 pillar Basadi temple proves, Karnataka was connected to China also. It is easier for Karnataka (Vijayanagar Kingdom) to Connect with China via sea link than with land route (via Himalayas). So, the connection was clearly via sea and has to be concluded like that. There are large number of proofs, showing Vijayanagara connection with China and Arabia. Arabian horses were imported in bulk. 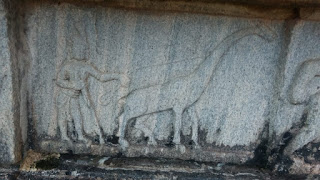 This is the most stunning image. It shows a “Domesticated” Giraffe. The man holding the Giraffe is an Indian. This shows lot of thing. It means, a Giraffe must have been brought to get domesticated to Karnataka. An Indian “GowPalaka/Sheppard” was taking care of it.

Compare the Giraffe sculpture with a photograph. The ears will not be visible, only horns will be visible. 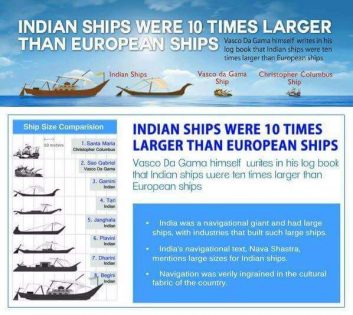 1) Indians, that too Kannadigas had very big ships that could transport a Giraffe.

2) The Centaur, Giraffe and Dragon sculptures prove that Kannadigas (Indians) were sea farers. They practiced deep ocean ship navigation sailing directly to Europe, China and Africa. The Ships were plying in open waters between Karnataka and Africa/China. So the navigation was not “coast hugging route”, the way Vasco Da Gama used from Europe to Africa.

3) Vasco Da Gama did not have the means to roam over deep sea. He had only a small ship, that navigated by sailing close to the coasts. He could cross the Indian Ocean from Africa to Kerala, only with the help of Indian “Navigators”.


If Indians were “Navigating” in deep sea with Big ships and showed the way, how come we say, Vasco Da Gama “discovered” sea route to India? So, it is a White lie. Next time you hear anybody speaking this lie, try to explain things. If adamant, mark the person as a “Brain washed fool”.

There is an account of Zhang He, Chinese explorer’s travel. It describes the pet giraffe of the Sultan of Bengal, brought from the Somali Ajuran Empire, was later taken to China in the thirteenth year of Yongle (1415). So, Indians brought Giraffe and might have tried to sell it to Chinese emperor. Bringing a Giraffe in to Asia well before Vasco Da Gama will very well weaken the story built to support Portuguese and European invasions (as  something great for Asians). 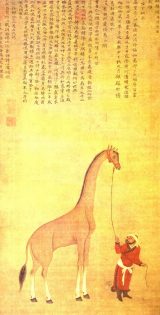 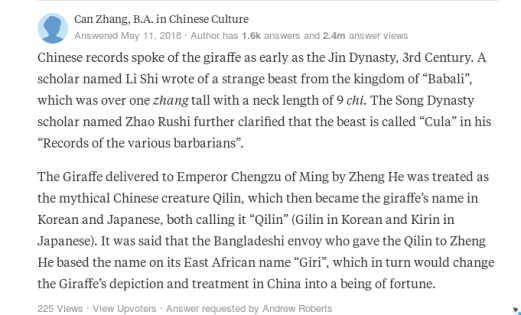 See What History channel says. They have recognized the “Truth”. It is time for Indian public to come out of these “Lies”. 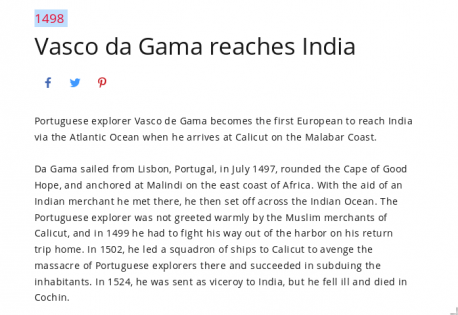 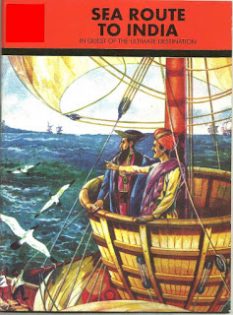 The picture below shows Vasco Da Gama in Kerala presented “a small gold vesset”, which was a pittance seek trade permission at that time. Indian and Arabic merchants offered large amount of gold for trade protection. 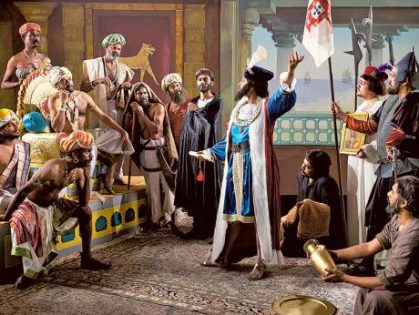 Actually, Vasco Da Gama was refused permission. So he captured few Indian fishermen and went back. He “Looted”  Arabian ships on his way back, to show, he was a successful explorer. He assembled an European band and came back to fight Indians. Vasco Da Gama was a “Pirate” and a “looter”. He has been projected as a “Great Discoverer”. This is nothing but a great Insult to India and Indians.
This article was first published at the author’s personal blog.
Images courtesy: Images of sculptures/carvings clicked by author; Rest of the images sourced from Google.
Facebook Comments Box
The following two tabs change content below.