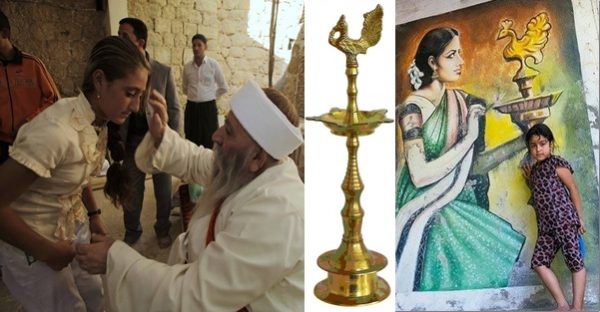 About 15 years ago while apprenticing with an Andean shaman I had a powerful experience that would set me firmly on a path to the discovery of links that unite the Hindus and the Yezidis of northern Iraq. During one shamanic ceremony high in the Andes Mountains I found myself in an unfamiliar dimension or alternate realm that today I refer to as the “Land of the Peacock.” Everywhere I looked I saw both heaps of peacock feathers as well as complete peacocks of all sizes scurrying around me. In the far distance instead of the snow covered peaks of the Andes were peacocks the size of mountains. Desperate for a clue as to where I had been transported to I remembered the Hindu Murugan and his radiant peacock-mount. Having been a Shaivite and Murugan lover for many years, I normally thought of the Son of Shiva any time I encountered peacocks or peacock plumes. But there was no young boy holding a golden Vel in this new strange land, so I could not be sure I had indeed entered one of Murugan’s realms. Ultimately I decided to wait until I returned home to the USA to look for a conclusive answer.

Back home I intensely surfed the internet for all information I could find about the peacock and a “Land of the Peacock.” My search eventually led me to the Yezidis, whose principal deity is Tawsi Melek, the “Peacock Angel” or “Peacock King.” Scrolling through websites that mentioned the Yezidis, I became excited when I discovered that the most sacred objects of the Yezidis were ceremonial lamps called Sanjaks that were surmounted with peacocks and looked identical to the Hindu Aarti lamps I had often seen in the temples of India. I immediately decided that there must be a special connection between the Yezidis and Hindus and resolved to discover what it was.

I soon contacted a Yezidi Faqir who was living in Lincoln Nebraska and then visited him at the home he had been living in since fleeing Iraq in the 1990s. The Faqirs are the Yezidis’ principal authorities on the Peacock Angel, so I was on a quest to seek out as many of them as possible. When my new teacher, Faqir Kawwal Hasan, met me at his door he could tell by my intense and urgent demeanor that I was in a desperate quest for answers and graciously proceeded to accommodate me, beginning with a legend that helped me identify the Land of the Peacock I had visited. According to Kawwal, in very ancient times the Peacock Angel had come to Earth and completely covered our planet with its etheric peacock plumes. Although those plumes crystallized to become all the physical forms of nature that would cover our planet, they also continued to exist etherically in an eternal peacock realm.

This was the Land of the Peacock I had visited. I then showed Faqir Kawwal some photos I had taken during a recent visit to Murugan’s temple at Kataragama in Sri Lanka and then inquired about a possible connection between the Peacock Angel and Murugan. Kawwal became very excited when he saw the
photos. He identified many symbols and ceremonial implements, such as the Aarti lamps, that were also part of Yezidi ceremony. He felt quite sure that Murugan and Tawsi Melek were intimately connected, and possibly even the same deity. He then so completely surprised me by some personal history that I nearly fell off the chair I was sitting on. He revealed that his ancestors had come from Gujarat, India!

My next Yezidi teacher gave me more insights to ponder regarding the mysteries of Tawsi Melek and the Yezidis and their connection to Murugan and the Hindus. During some lengthy telephone conversations with Kamal Kaso, a Faqir living in Iraq at the time, I acquired many more pieces to my evolving puzzle. During one conversation Faqir Kamal informed me that according to Yezidi history there had been a huge devastating flood in the Middle East around 4000 BCE. At that time many Yezidis fled east and settled in India. Two thousand years later many of them returned to their homeland and became part of the Sumerian, Assyrian and Babylonian civilizations. But an abundance of Yezidis also chose to remain in India, which explains why Faqir Kawwal’s ancestors were from Gujarat, and why it was easy to spot many noticeable similarities between the Yezidi and Hindu cultures.

At another time Faqir Kamal revealed to me a legend that corroborated the Peacock Angel’s definitive link to Murugan. According to this legend, during the time of the Garden of Eden Tawsi Melek taught all the 72 tribes that were destined to populate the planet how to worship the Supreme Being and then sent them to their appointed territories around the globe. Over the thousands of years to follow the name and form of Tawsi Melek changed among these diverse people, but his role as their Savior remained intact. In some countries the changes to his name and form were slight, such as in India where he became known as the peacock-riding Murugan. But in other lands they were very pronounced. When I told Faqir Kamal that I had traveled and studied around much of the globe, he instructed me to continue identifying the other forms of Tawsi Melek in other cultures. This I have done and my research is currently presented in the website I created for the Yezidis: www.YezidiTruth.org. 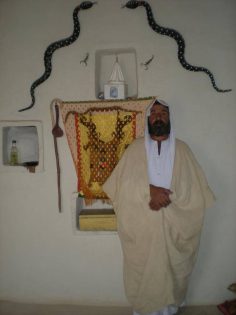 Below are some of the many links I have found that unite the Yezidis and Hindus. I currently believe that these two people were once united by the flood of 4000 BCE, but they were also united by a universal culture that once covered Asia, Europe and Africa and has been called the “Worldwide Bull Cult.” There are so many similarities between this ancient culture and modern Shaivism that I currently refer to it as the Primeval Shaivite Culture. I will write thoroughly about this culture in a future article. 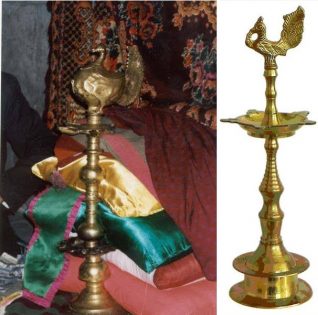 The link between Hindus and Yezidis is implicit at the Yezidis most sacred temple shrine of Lalish in northern Iraq. Painted on a temple wall is the mural of a woman wearing a Hindu sari while holding a Sanjak/Aarti Lamp. 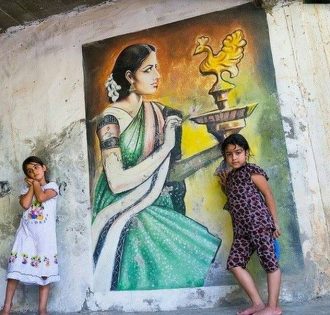 Both Murugan and the Peacock Angel are the Saviors of their respective cultures, and, of course, they are united by the imagery of the peacock. They are also both associated with the seven stars of the Pleiades. One of Murugan’s names is Karttikeya, meaning “Son of the Pleiades.” 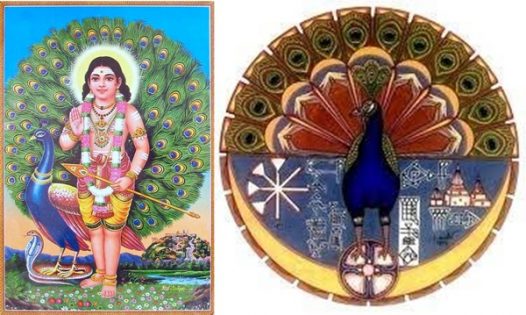 The Peacock-riding Murugan and the Peacock Angel

Both Hindus and Yezidis share a belief in human reincarnation and transmigration.

Both Hindus and Yezidis are blessed by their holy persons at the sacred space between the eyebrows. They also anoint themselves at this “Third Eye” region. 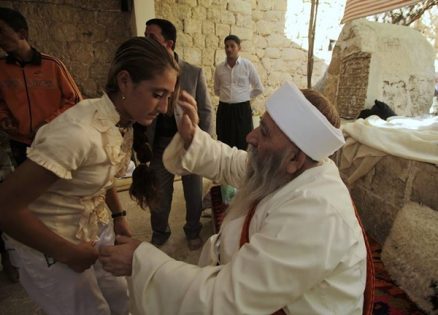 Mark Amaru Pinkham is an internationally known author and researcher from Sedona, Arizona. He oversees the Order and Mystery School of the Seven Rays (www.SevenRayOrder.com).

Why Hindus Did Not Give Up Their Right Over Ram Mandir