Share
Hon’ble Supreme Court Should not Interfere on National Anthem Issue. Here’s Why 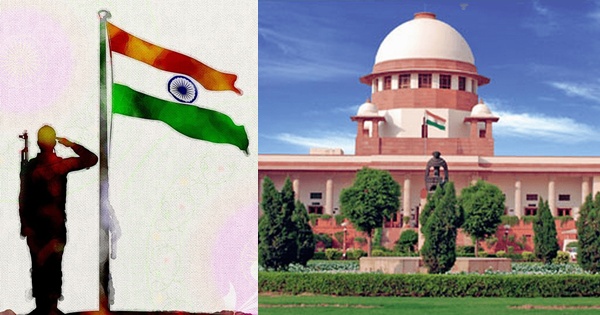 National Anthem Controversy happens only in India on the entire Earth Planet and the Orders by Hon’ble Supreme Court of India is further making a serious issue for debate!

We respect sentiments and emotions, elders and ancestors; we respect even the dead. Similarly we respect our nation and hence, automatically national symbols like National Anthem and National Flag.

A few anthems have words by Nobel laureates in literature. The 1st Asian laureate, Rabindranath Tagore, composed the words and music of Jana Gana Mana and Amar Shonar Bangla, later adopted as the anthems of India and Bangladesh respectively.

In my opinion, there is no merit in admitting this case in Court of Law. The submission should have been dismissed during 1st hearing at admission stage itself. I justify this with the following points:

1. Judgement by the Hon’ble Supreme Court

i. Supreme Court said playing National Anthem is mandatory in cinema halls, but there should be no commercial exploitation. December 03, 2016.

iii. Supreme Court suggests it could modify order on National Anthem in movie theatres.
People may not be required to stand up in the cinema halls to prove their patriotism, observed Supreme Court judge Justice DY Chandrachud. October 23, 2017.
iv. ‘No Need to Stand At Cinema to Prove Patriotism’: Supreme Court on Anthem.
Chief Justice Dipak Misra, who had ruled last year that the anthem must be played before every show at cinema theatres, was among the three judges who said that the Centre should decide whether to modify that order without being influenced by what the court had said earlier. October 23, 2017.

i. What is National Anthem – A national anthem (also state anthem, national hymn, national song, etc.) is generally a patriotic musical composition that evokes and eulogizes the history, traditions, and struggles of its people, recognized either by a nation’s government as the official national song, or by convention through use by the people.

ii. Language – A National Anthem is usually in the national or most common language of the country.

iii. Usage – a. National anthems are used in a wide array of contexts. Certain etiquette may be involved in the playing of a country’s anthem. These usually involve military honours, standing up/rising, removing head-wear, etc.

b. They are played on national holidays and festivals, and have also come to be closely connected with sporting events. Wales was the first country to adopt this, during a rugby game against New Zealand in 1905. Since then during sporting competitions, such as the Olympic Games, the national anthem of the gold medal winner is played at each medal ceremony; also played before games in many sports leagues, since being adopted in baseball during World War II. When teams from two different nations play each other, the anthems of both nations are played, the host nation’s anthem being played last.

c. In some countries, the National Anthem is played to students each day at the start of school as an exercise in patriotism. In other countries, the anthem may be played in a theatre before a play or in a cinema before a movie. Many radio and television stations have adopted this and play the National Aanthem when they sign on in the morning and again when they sign off at night. For instance, the national anthem of the People’s Republic of China is played before the broadcast of evening news on Hong Kong’s local television stations including TVB Jade and ATV Home. In Colombia, it is a law to play the National Anthem at 6:00 and 18:00 on every public radio and television station, while in Thailand, Phleng Chat is played at 08:00 and 18:00 nationwide (the Royal Anthem is used for sign-ons and close-downs instead).
I think my submission shall be incomplete unless I mention about Indian National Flag too as National Anthem is played in front of National Flag. Hence,
3. The National Flag
i. What is a National Flag: A national flag is a flag that symbolizes a country. The flag is flown by the government.

A flag is a piece of fabric (most often rectangular or quadrilateral) with a distinctive design that is used as a symbol, as a signaling device, or as decoration. The term flag is also used to refer to the graphic design employed, and flags have since evolved into a general tool for rudimentary signaling and identification, especially in environments where communication is similarly challenging (such as the maritime environment where semaphore is used). National flags are patriotic symbols with varied wide-ranging interpretations, often including strong military associations due to their original and ongoing military uses. Flags are also used in messaging,.

Flags are known to be used since ancient time in India. One of the most popular uses of a flag is to symbolize a nation or country.
ii. Hoisting the flag:
Hoisting the flag is the act of raising the flag on the flagpole. Raising or lowering flags, especially national flags, usually involves ceremonies and certain sets of rules, depending on the country, and usually involve the performance of a national anthem.

iii. With the emergence of nationalist sentiment from the late 18th century the desire was felt to display national flags also in civilian contexts.

iv. Process of adoption
The national flag is often, but not always, mentioned or described in a country’s constitution, but its detailed description may be delegated to a flag law passed by the legislative or even secondary legislation or in monarchies a decree.
v. Uses of National Flag:
There are three distinct types of national flag for use on land, and three for use at sea, though many countries use identical designs for several (and sometimes all) of these types of flag.
The following two tabs change content below.

A Civil Engineer, Krishna Kumar Gupta worked with Hindustan Construction Company , Western Railways, AAI, etc. For him, NATION comes first. He is adventurous and has interests in Religion, History, Geography.

Shital Mahajan, the Sky Queen Who Did 5 World Records and 14 National Records