The Buddha and the Bitch: Two Women, Two Worlds, One Practice 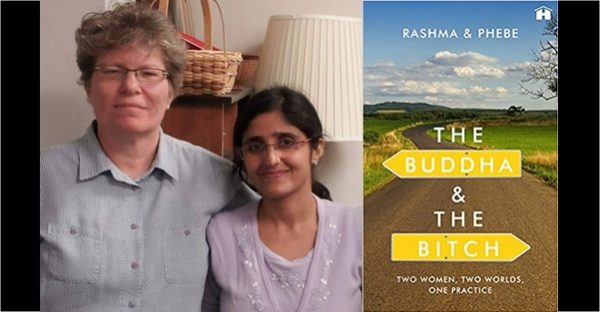 The Buddha and the Bitch:  Two Women, Two Worlds, One Practice is an inspiring story of two women’s friendship, their travels and their writing practice. Two unlikely friends, an American poet and an Indian playwright, travel together to Pondicherry to collaborate on a book. Their conversation inevitably turns to their own lives as women from different cultures, generations, and sexual orientations.​ On their trip they encounter arrogant men, amused women, and curious guides; their funny experiences find their way into this book titled The Buddha and the Bitch.

The Buddha is a sixty something woman from the Midwest United States, teaching writing classes in her retirement. A poet and lesbian, Phebe took the first five Buddhist vows from a Zen master on a mountain over a decade before. Is she eclectic or just mixed up?

The self-described Bitch is forty something, wife, mother, novelist, and playwright. Rashma is fiercely independent, living without her family for months at a time to stage her plays in Melbourne, Australia.

The two come from different countries and cultures, different generations, different orientations. For these two women to have become friends, much less confidantes, is perhaps a miracle of synchronicity, fate, or karma.

Crafted from two years’ worth of online chats, travel diaries, and in person conversations, the chapters alternate between Rashma’s and Phebe’s voices. The story of The Buddha and the Bitch begins at the Delhi airport as the protagonists make their journey south. As soon as they set their foot outside the familiar the two friends start to have misgivings about their adventure. The many cultural and personality differences crop up, but the love for words and humour keeps them together.

They jump time frames to discover the back stories of the protagonists and the journey of their unique friendship which started on email. As the two friends tour Pondicherry, they discover something about life and writing. The French villa becomes an idyllic setting for writing and musing. Churches, ashrams, temples, the Indian countryside and heritage sites become fodder for their book.

Initially Rashma looked up to her onetime online teacher as a guru. As the story progresses Rashma begins to doubt Phebe’s commitment to writing pratice when the retired lesbian becomes enticed by a potential romantic partner on the East Coast. Before the narrative of The Buddha and the Bitch ends, Phebe learns much more about her heart than she’d ever imagined and Rashma’s realizes her blind pursuit of the Art was misplaced.

Multifarious themes, online chats and narratives blend seamlessly in The Buddha and the Bitch. What began as friendly online chats about their banal lives is magically transformed into an insightful dialogue about Art, meditation, politics, and what it feels like to be women writers in the 21st Century. 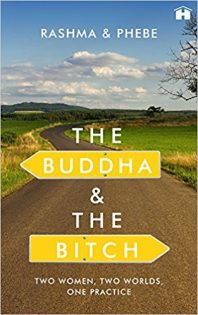 Click here to buy The Buddha and the Bitch

Rashma N. Kalsie is an Indian author-playwright based in Melbourne and Gurgaon. She is the writer of an award winning play. She is a published author of two books, one play and two monologues are part of Australian Monologue collections. Rashma has written short stories, TV scripts, plays, books and articles. She is an active Blogger.

She is the founder of Indian Diaspora Dramatics Association, a registered association in Australia.  Rashma was MTC Connect ambassador from 2013 to 2015.

Rashma has also successfully managed production, casting/talent hunting, publicity and ticket sales for her play, The Lost Dog, in 2012 and 2014.  The Rejected Girl, a play about arranged marriages was shortlisted in all India contest of One-Act plays by Mumbai Theater Guide in August, 2014. Her early career play, Meri Script hai Kahan was produced by Eventura Creations, at FICCI Auditorium, New Delhi.

Phebe (Karen) Beiser has led workshops both as a writing teacher and librarian. (Bachelor’s in English Literature, Master’s Degree in Library Science). She has been facilitating writing classes at the nonprofit school Women Writing for (a) Change since 2006. From 2012-2014 she and another woman created and taught online classes based on Women Writing practices (such as supportive feedback, authenticity, and community). These weekly classes connected women from around the world through Catherine of Siena Virtual College.

At the age of fifty, after studying with a zen group, Phebe took the first five precepts of Buddhist conduct (2000). With her longtime fascination for India, a trip was inevitable. With a small group, she traveled to Varanasi during Holi 2008. Goddesses on the Ganges (with Maria Motch) was published in 2010 with grant money following this trip.

Co-founder of the Ohio Lesbian Archives in Cincinnati, (1989-present), Phebe has been a leader in lesbian-feminist activism since the late 1970’s. Crazy ladies: vision and venture: the history of Crazy Ladies Center, 1979-94 (c1995 with two others) documented more than a bookstore, in fact a political and sociological community. Her great love, however, is poetry. Phebe self-published a chapbook long ago but is still seeking that perfect book of poems.