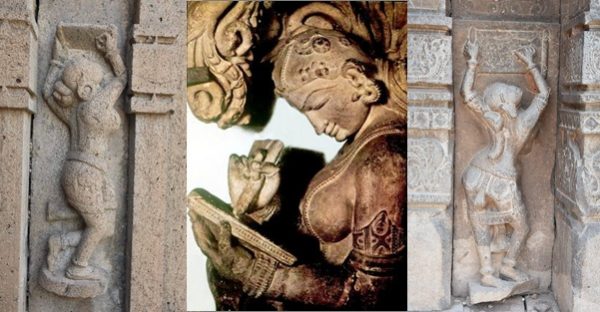 Do not subscribe to the view that, Women were suppressed in India (A narrative from leftist, Feminist, Liberals, who try to template India from western templates. They give a picture that, Women were denied opportunity of education in India. If anybody says this again, then please show this post and ask them to explain.

The sculpture image shown below is “Shasana Sundari”, a woman writing a letter in Jalasangi village temple. The temple belongs to Kalyani Chalukyas, who ruled 1000’s of years back in Karnataka. At that time, rule was purely on Hindu principles. Muslim, Christian or western narrative did not exist. 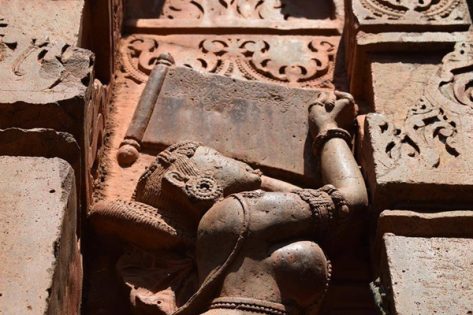 It clearly proves, women in India knew reading and writing (In fact even before English was invented). 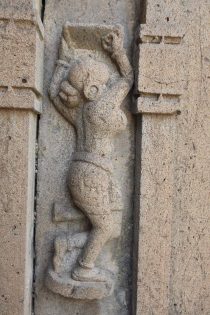 The following sculpture too depicts the same. It is from a Siva temple in Koravali, Maharashtra. 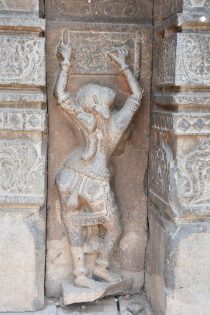 The following sculpture is from a Chalukyan temple in Belagavi, Karnataka. 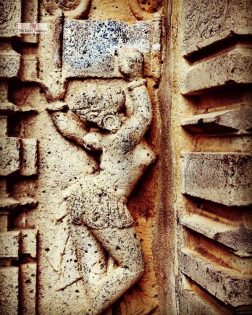 All the sculptures are from are Chalukyan era temples, dating back between the 6th and 12th centuries.

The following image is of Shakuntala writing a letter to Dushyanta, a scene portrayed in “Abhgnana Shakuntala” by Kalidasa. She was an orphaned child, brought to an ashram and educated, under Hindu rule. 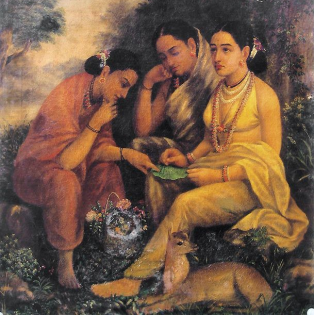 Meghadootha, again a classic work from Kalidasa (Before Christ was born). It depicts, a “Yaksha” sending message to his “wife” through clouds. It was imagined based on writing. If messages were sent to a “wife” by writing, how will she read it, unless she knows how to read and write? 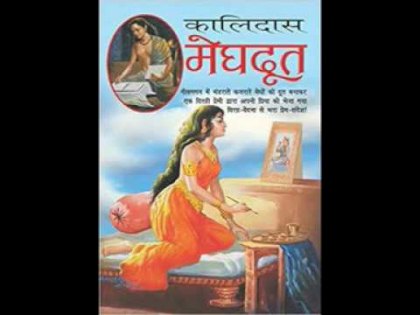 Vikrama Urvasiyam, in another Kalidasa work, it is depicted that, King Pururavas falls in love with a celestial nymph named Urvashi. After writing her mortal suitor a love letter on a birch leaf, Urvashi returns to the heavens to perform in a celestial play. So, Urvashi, a woman is depicted writing a letter.

Vidharba princess Rukmini wrote a love letter to Lord Krishna requesting him to marry her. This is even depicted in the Mahabharatha. Khajuraho Khandariya Mahadev temple, depicts a lady writing a letter. Probably, the idol is influenced from Mahabharatha/Kalidasa story. 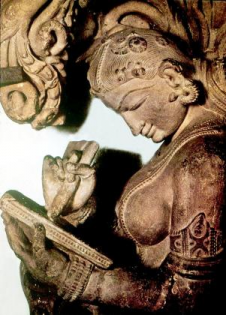 Silappadikaram, one of the five Tamil epics, Madhavi, the dancer with whom Kovalan had relationship for sometime wrote to him after separation. She asked him why he left her. It was sent through a Brahmin, called Kausikan. In ancient India Brahmins acted as messengers for kings and others. This is in Puranceri Irutta Katai in Silappadikaram.

In another place (Ataikala Katai), a story of Panchatantra Tales is referred to. The story is about a Mongoose saving the baby from a snake in a Brahmin household, but being killed by the mother, mistaking, mongoose itself killed the baby. Her husband was enraged by her hasty stupid act. Immediately he gave her a palm leaf containing a message in “Sanskrit”. He told her that he wouldn’t eat food served by her. He went on a pilgrimage to North. Tamil “Old” Literature indicates “Sanskrit” letter was given to a “Wife”. There are 2 important points here. Since Tamil is referring to Sanskrit, Sanskrit existed before Tamil (It should settle Tamil as the oldest language, who argue based on silapadikaram). Second point is that, women were given letters. If they were uneducated, how were they reading it?

The oldest book of the world Rigveda has references to female personalities composing Rigvedic Hymns. This clearly shows, Women were ‘Educated’ right from beginning. No discrimination of what so ever is visible in “Indian History” before Muslim invasion. If they wanted to contribute, they were welcomed and encouraged. Mathematics book “Leelavathi” was composed on a woman.

There are women warriors depicted on temple walls. Durga was shown, so that, women should not feel any fear in assuming “warrior” roles, if required. Consider this famous seal from Harappa, where in a women fights 2 tigers (fighting 1 tiger itself is difficult) with her bare hands. Why does it even exist? It is a live testimony that, in Saraswathi-Sindhu civilization, women were not subjugated. They were respected and revered.

In Ramayana, Kaikeyi accompanies Dasharatha to Battlefield. Because of her valour, she earns the 3 boons. When Abhimanyu looses sense, his mother, who was sitting next to him, started to fight Ghatotchkacha in Mahabharatha.

In history, Ashoka fights a “Queen” from Kalinga. Ashoka was a “Great Emperor”. If a “lady was his opponent” leading a large army, what does it indicate? It is not one of an example; there are many examples that comes up in Mythology, Purana’s, Vedas and Indian History.

Consider any “swayamwara” scene from any Hindu stories. The bride chooses her companion at will. The mighty “Rama” and “Ravana” both attended Seetha swayamwara. Seetha was just a “tender” bride. Her father Janaka, was not mightier than any of the kings in the event. But she was given the option to choose. The bride “decides” in-spite of her “Weak” position in the deal. Same in Draupadi swayamvara. Draupadi’s consent was taken to marry 5 brothers. It was not forced. Kalidasa story depicts same. The princess chooses her companion after questioning many “Kings”. It doesn’t show an iota of subjugation, but highest standard of “civility”. It shows maintaining “Equity” among men and women (irrespective of their power position).

The cradle of Indian civilization, Rivers Saraswathi/Ganga/Yamuna/Kaveri/Krishna/Nethravathi/Godavari/Narmada/Sindhu – you name it, all most all rivers are named after “feminine” power. The rivers were worshiped and respected on a daily basis. If women were subjugated, will the “powerful men”, not name the rivers after their own names? We do not see it at all. Respecting “Mother – first” is the culture of this land (Mathru devo Bhava comes before Pitru devo Bhava) . This is the culture we see all along in this holy land.

Out of compassion and respect, Women in India, were never subjected to Capital punishment. Worst offenders like killing a king by poison were also not beheaded, but debarred to forest. Like “Brahmins”, women were considered as “Pious”. You do not see even one example of a women getting beheaded in any Indian story. Powerful men never ever used to fight against a single “Woman”. Showing power against helpless and non-equal opponent was considered as “derogatory”. Because, Showing Power on a helpless woman was considered as mental weakness. That guy was branded as unfit to face the mighty and hence showing his power on a weak woman. He would get “shame” of his life and never ever could live in society.

That is why, Bheeshma refuses to fight “woman” in battle. Ravana was advised to let of Seetha, because, he used his power against a helpless woman. That was considered as derogatory not just for Ravana, but for entire Lanka. Infact Ravan was advised to return sita, face Ram, kill him and then obtain Sita. That was the “Logic”. When Bharatha wanted to “Kill” His mother and her attendant for conspiring to send “Rama” to forest, Rama stops him and advises to pardon them. Punishing any woman using “State power” was considered as derogatory for “Kings”. Rama never harness any “hate” and takes blessings from “Kaikei” too before proceeding to forest. That sets the high “Benchmark” for Indian culture and tradition.

So, where is the question of women discrimination? It all started, when Muslim invaders start to mistreat women from the “defeated” lot. Women were taken hostage and sold as “sex slaves” in Arabic lands. That is when the situation changes. Megasthanese, in his Indica documents that, there was no “slavery” of what so kind in India. Neither men nor women were held as slaves. Women subjugation comes from “Slave” mentality followed by Abrahamic religions. 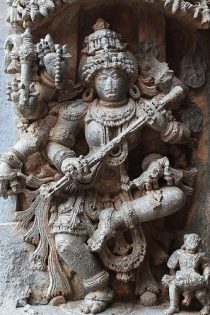 Why all these, the god of wisdom and knowledge itself is attributed to “Saraswathi”, a feminine power. If women were supposed to be denied “education”, then why will they depict a lady god for “education”? Simple and plain. In fact all the three supreme powers, Knowledge (Saraswathi), Wealth (Lakshmi) and Physical strength (Durga) are encapsulated as feminine characters. The land is considered as “Mother Land”. So, if at all there is any religion or country that respected “Women” from beginning, it is Hindus and India. “Mother goddess” worship was found in Harappan civilization. The idols that were obtained was only feminine figures. No “Male” god figures were retrieved till now. 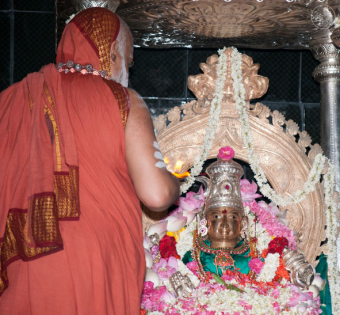 Indian society was much much mature than the way these leftist liberals are depicting.

Stop subscribing to this “brain washing” leftist propaganda of women subjugation in India. It is aimed at “fetching votes from women folks”, who are nearly 50% of the vote bank.