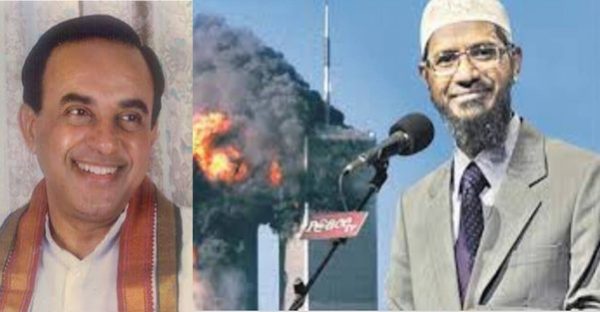 Doctrine of Jihad by Dr. Swamy.

1400 years old History and strategy of invasion is still a brutal threat to non Islamic civilizations. All doubts about Jihad get clear after knowing this. Non Muslims must know this.

This article is based on Dr. Subramanian Swamy’s speech in U.S.A. based purport given by David Woods – An American Scholar.

DOCTRINE OF ARMED JIHAD AS PER ISLAM

Muhammad told Muslims that world is in 3 parts. Muslims behaviour must be different in each of those three parts (Jihad e Asghar).

1st PART OF JIHAD: WHEN MUSLIMS ARE IN MINORITY AND MAJORITY IS UNITED (Dar al Aman): In this part Islam guides Muslims to be friends of Kafirs (non-Muslims) on face and within one must see them as enemy. Be united, increase population anyhow. Example, In Australia there is  2% Muslim population. A scholar Imam once demanded the government that we are Muslims and we need different Sharia laws for marriage, divorce etc. The then lady Prime Minister of Australia said that the people who need Sharia must go and live in the countries that have Sharia. Next day all the Muslims collectively accepted that they are happy with Australian civil law and that Imam is mad, so, do not bother. “This is where one will find all moderate good Muslims only”. What Muslims agreed in Australia, will never accept in India.

2nd PART OF JIHAD: WHEN MUSLIMS ARE IN MINORITY AND MAJORITY IS NOT UNITED (Dar al Harb): Here Islam says that kill whomsoever raise voice against you, Be united, increase population and keep on demanding for Sharia laws one after another. “This is where one will find moderate good Muslims and extreme Radical Jihadi Muslims mix. Means radical Jihadi Muslims hide within the cover of moderate good Muslims in a way grasshopper hides within grass for prey”. Here Moderate good Muslims (Movie stars or influential celebrities, authors, writers, painters, musicians etc)  give cover to Radical Jihadi Muslims to keep the majority confuse. Eg. In France a Painter was killed for painting 7 years old child bride of Prophet Muhammed with 53 years old Prophet Muhammed (Kill whomsoever raise voice against you) but when  in India a famous Padma Bhushan award winner Muslim painter M.F. Hussain painted nude goddess on the lap of Jesus, nothing happened to him rather good moderate Muslims supported his actions with silence as usual. No good moderate Muslim ever condemn  when tens of thousands of Yazidi females were taken as sex slaves and raped from morning to night by different radical Muslim Jihadis everyday only to be sold as cheap as $10 – $500 per girl in Muslim markets later. Muslims shout for Gaza everyday but pin drop silence on Yazidi females brutalised as sex slaves. Whenever and wherever Radical Jihadi Muslims do crime against non Muslims then no good moderate Muslim condemn it till the time it is super emergency to defend Islam. Islam permits Muslims to lie “Lie to defend or strengthen Islam”. Rather they support the act by silence or confuse the majority with one or two examples of good moderate Muslims. They generally say that “All Muslims are not bad and just due to handful of Radicals whole Islam can’t be blamed”.

3rd PART OF JIHAD: WHEN MUSLIMS BECOME MAJORITY (Dar al Islam): Kill non Muslim (Kafirs) or convert them. Take whatever they possess. Take Kafir women as sex slaves. Force them till they agree to accept Islam. It is halal (pious deed) and whomsoever will call it haram (sinful activity) is a sinner and must be slain. Forceful sex with sex slaves is not considered as rape as per Islam. “Sex with woman that your right hand possess is halal (pious)”. Non Muslim Kafir Sex slaves that are captured during Jihad comes under the heading “women that your right hand possess” as per Islam. Children born from sex slaves are newborn Jihadi Muslims who are given Radical Jihad training since childhood. This is where one will find only extreme Radical Jihadi Muslims and all the so called good moderate Muslims suddenly vanish into nowhere. Resent example of this is seen in Iraq where nearly all the young non muslim girls and women were taken as slaves by Radical Jihadis. Even 8- 10 years old kid girls were taken as sex slaves and got gang raped everyday from morning to night. Whole Yazidi religion civilization is destroyed to the extent it could be destroyed. In Kashmir January 1990, few lac hindu males were killed, few Lac of hindu girls and women were made to march nude on roads before gang rapes and taken as sex slaves. Around 5 Lac (500,000) Kashmiri hindus became refugees in own country leaving behind their homes, businesses and some of them even their daughters and women.

Cent Percent of Kashmiri Muslim population supported Jihad on peaceful defenceless Kafir Hindus. No moderate good Muslim ever spoke about it yet. Recently few hindu sex slaves were rescued by defence forces from the refugee camps of Rohingya Muslims, who told that their fathers, husbands, brothers and nearly all male family members were killed in front of them and they were taken as sex slaves to get raped from morning to evening, everyday. This was covered one or two news channels only, when the forces recovered 99 dead bodies of  Hindus in Myanmar that were slaughtered and buried by Rohingya Muslims. Many hindu women were made pregnant by Jihadis. Recently exact story was repeated in West Bengal, Asansol and Raniganj in the year 2018. In these two neighbouring cities Muslims are in Majority collectively. Hindu males were killed by Jihadis on the day of their festival Ram Navami. Hindu males were killed, many hindu women were taken as sex slaves after mass gang-rapes, thousands of Hindus were forced by situation to live in refugee camps leaving behind everything. Bengal Chief Minister only cared for block Muslim vote bank as in Democracies only number of votes matter for politicians generally and Muslims around the globe in all the Democracies vote as block. There’s a pin drop silence among all good moderate Muslims regarding all these cases of brutality. Example of Darul Islam are- Iraq, Iran, Pakistan, Afghanistan, Bangladesh, Egypt, Arab, Kashmir, Kairana U.P., Dhulagarh -Bengal, Malda -West Bengal, Raniganj- Bengal, Asansol – Bengal and so on.

Above are some facts, figures and statistics of what actually is happening around the globe.

Whenever someone speaks about doctrine of Jihad then the Islamic scholars give an argument that this is not Jihad and Jihad is actually doing good deeds to others like helping someone is Jihad, to give water to thirsty person is Jihad and so on. Another argument Scholars put is that Islam says to kill one innocent person means killing whole humanity. So people generally get confuse whether this is true Jihad, about which this scholar is telling or that is true Jihad which huge armies like terrorist organisations around the globe are doing? To know Jihad from root one must  know who is Kafir? So, let’s find out.

Who is KAFIR as per Islam?

A person that fulfills any of the above 5 criterias is Kafir.

Jihad E Akbar is all about how to be a good Muslim has nothing to do with Non Muslim Kafirs. It is about doing good deeds  to other Muslims. It also refers to that- Muslims must conquer their inner bad qualities and develop good one’s.  As per Islam being Kafir or Kufr is considered as biggest crime. There is no provision of good deeds or mercy for such criminals as per Islam. To kill a criminal kafir is always halal (pious deed as per Islam). Only Muslim can be innocent and Kafir is always a criminal, so, that saying of Islam which says- to kill an innocent means to kill whole humanity is not applicable on non Muslim Kafirs. Kafirs are eligible to get mercy only if they get ready to convert into Islam else they are dealt as per Jihad E Asghar mentioned in Swamy’s speech.

Jihad E Asghar is all about how to deal with non Muslim Kafirs as mentioned above in the article.

Non Muslims are not concerned with how to be a good Muslim or Jihad E Akbar but Jihad E Asghar and how Muslims deal with Kafirs is definitely a matter of concern for non Muslims.

Below is a 1 minute video on atrocities done by Rohingya Muslims on hindus, 99 dead bodies of Hindus that were killed and buried got recovered and the eyewitnesses confirmed it. Eye witnesses were hindu women from their families who were taken as sex slaves and were forcefully converted into Islam after gang rapes. Only 8 hindu women got rescued by defence forces, more unfortunate one’s are still missing.

Click here to watch a small 3 minute video of rescued Yazidi sex slave and her narration of what happened to her and others. Even members of United Nations got tears in their eyes.(English subtitles)

Click here to watch a 6 minute documentary on 1990 Kashmir by Anupam Kher when more than million  Kashmiri Hindus were killed, women were gang raped, murdered and taken as sex slaves. Around half a million of Kashmiri Hindus became refugees in their own country. (Hindi)

Click here to watch a 5 minute news video on West Bengal Jihad, where Hindus were forced to leave their homes and belongings just to be refugees in their own country, India. This happened in 2018. After Malda and Raniganj it’s Asansol where Hindus were killed and forced to leave everything behind. Only one news channel covered the news with very diluted facts. (Hindi)

List of some of the terrorist organisations around the globe with huge followings (in millions) who are doing Jihad  and also training Muslims around the globe to instigate Jihad on (non-Muslim) Kafirs. They are preaching, radicalising and training through Mosques, Madrassas (Muslim schools) and Social Media.

It is always better to read the author as person first and then the book. Who the speaker is matters a lot. Then one is never deceived by the content.

Dr. Swamy is Ex- Professor of economics from Harvard University, Indian Parliamentarian. Supreme court Lawyer, Leading Indian Economist, Statistician, current Rajya Sabha member. List is long, so not mentioning all. Dr. Swamy is known for speaking difficult truths with facts, logics and statistics. Dr. Swamy is awarded by P.M. Narendra Modi for his tremendous work and sacrifices to end the eighteen months long Emergency Rule  imposed by Smt. Indira Gandhi, else India would have been Dictator Rule Country like North Korea instead of Democracy.