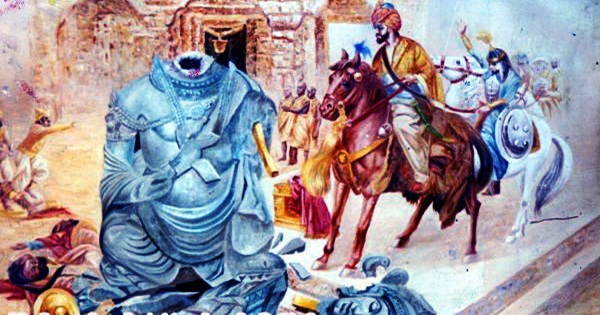 Rajiv Lochan Ray or popularly called Kalapahad, which means ‘Black Hill’! Such was his physical built and stature! He was the army general of Gajapati Mukundadeva, the king of Kalinga (Orissa) in the 16th century. History books find mention of him as a Muslim General of the Gaur Sultanate. Mughal records mention him as the attacker of Konark Sun temple and Jagannath temple of Puri. How did Rajiv Lochan Ray, the strongest Hindu general of the Orissa army become a Muslim general?  Though he was a Hindu, as a converted Muslim why did he destroy temples?

This was a trap of love jihad by Sulaiman Karrani, the Pathan Sultan of Gaur of Bengal. He treacherously converted him and used him to lead his army!  Also known as Kalachand Roy, Kalapahad was a Brahmin by birth. By dint of his warfare skills and valor, he rose in power and position to become the most trusted general of Orissa. Kalapahad never lost any battle.

During this time, Rudranarayan was the king of Bhurishrestha kingdom, also called Bhurshut that comprised of the present Howrah and Hooghly districts of Bengal. Rudranarayan, a strong ruler, expanded his empire to include the southern part of Burdwan, East Midnapore, and major parts of West Midnapore. He organized and reinforced the navy, stationing a strong naval force along the Damodar and the Ron river banks of his territory.

The Mughal Empire under Akbar emerged powerful in Delhi so were Islamic rulers in the neighboring provinces. There was always a lurking threat from the Islamic invaders. In alliance with the king of Kalinga, Rudranarayan decided to counter the rising Pathan Sultanate of Gaur. Sulaiman Karrani was then the Sultan of the Gaur kingdom.

Sulaiman Karrani, who succeeded his brother Taj Khan, as the Sultan of Gaur in 1563, built a strong army. Taj Khan was an employee under Sher Shah Suri; he revolted and laid the foundation of the Karrani Sultanate in Gaur of Bengal. Karrani Sultans were later under the sovereignty of the Mughals. They could not mint their own coins and they regularly paid tributes to the Mughals.

Sulaiman Karrani not only wished to expand his empire by subjugating neighboring kingdoms of Bihar, Bengal, and Orissa but also wanted to wage war against the Mughals in alliance with the subjugated rulers. Many Afghans of Delhi, Oudh, Gwalior and Allahabad joined hands with Karrani.

Meanwhile, Rudranarayan met Gajapati Mukundadeva and other neighboring rulers to give shape to his plan – attack Sulaiman Karrani before the latter gives shape to the Pathan Sultanate expansion plans. Also known as Mukunda Harichandana, Mukundadeva ascended the Orissa throne in 1559. Orissa was then known as Kalinga and its empire comprised parts of Orissa, Bengal, and Bihar. Believed to be of Chalukyan origin, he was earlier a minister under Raja Chakrapratap of Orissa of the Bhoi dynasty. After the king’s death, Mukundadeva rebelled against the Bhoi kingship, killed the last two Bhoi heirs, and declared himself king. His most trusted general was Kalapahad who looked huge like a mountain.

Meanwhile, Mukundadeva accepted the suzerainty of Akbar. It was the year 1565. The Mughal Emperor knew of a possible revolt by the Karrani Sultan and he wanted local rulers to subjugate and defeat the Sultan. Akbar was only waiting for Mukundadeva to attack Karrani. He was more than glad when the combined forces of Kalinga and Bhurishrestha planned to attack Karrani.

Kalapahad was made the commander of the allied forces of Bhurishrestha and Kalinga. A fierce battle took place between the allied forces and Karrani in 1565 at Tribeni in the Hoogly area of Bengal. Tribeni was the place of divergence of three rivers – Yamuna, Ganga and Saraswati. The Pathan forces were completely routed in this battle. The allied forces exhibited remarkable bravery under their commander Kalapahad. Karrani’s forces were slaughtered like hay and were badly defeated. The Sultan fled the battlefield.

After this remarkable victory of the allied forces, Gajapati Mukundadeva rewarded Kalapahad by giving him administrative control of Saptagram. Located in Bengal near Hoogly, it was part of the Kalinga kingdom. Commemorating this victory, the king built a temple at Tribeni on the banks of Ganga at a ghat at Gajagiri.

A peace treaty was signed between the allied forces and Sulaiman Karrani. As Mukundadeva had the support of Akbar, Sulaiman Karrani thought it pointless to attack the Kalinga kingdom. But Rudranarayan of the Bhurishrestha kingdom of Bengal had neither accepted the suzerainty of Akbar nor struck any alliance deal with him. Hence, Karrani decided to attack Bhurishrestha. But as Rudranarayan and Mukundadeva were friends, the Bengal kingdom would always have the support of Kalapahad as the commander. And as long as the valorous Kalapahad was commander, Karrani would never be able to defeat Rudranarayan.

Sulaiman Karrani devised a plan. He planned to win Kalapahad to his side by any means. If he won him to his side, he would not only be able to defeat Rudranarayan but also Mukundadeva and more neighboring kings. He would be able to revolt against the Mughals too. This way, he felt he would be able to establish an empire.

On one instance, Kalapahad visited Karrani’s place on behalf of the Kalinga king to give shape to the peace treaty. Karrani had a beautiful daughter named Gulnaaz. The Sultan treacherously trapped Kalapahad into a love affair (which is termed love jihad in today’s context; this trap has been continuing since several hundred years) with Gulnaaz. She was entrusted with the hospitality of Kalapahad at the Sultan’s place. Gulnaaz tried to woo and win Kalapahad. The Hindu Brahmin general at once fell in love with Gulnaaz.

An elated Karrani added fuel to the fire. He wanted the marriage to take place.  When Kalapahad knew that Gulnaaz’s father had no objection to their relationship, he was determined to marry her. Karrani waited for an opportune time to let the marriage happen. He wanted the bond to grow stronger. And when the opportune time came with Kalapahad all geared up to marry Gulnaaz, Karrani gave a condition. To get married to Gulnaaz Kalapahad should get converted to Islam. Initially, Kalapahad hesitated to get converted. He gave a counter condition – that Gulnaaz should convert to Hinduism to which Karrani disagreed. When there were no other ways left, he agreed.

Kalapahad thought after marriage he would reconvert back to Hinduism. And he got converted to Islam under a new name and identity – Muhammad Farmuli. And then the marriage between Muhammad Farmuli and Gulnaaz took place.

The news about Kalapahad being converted to Islam and married to Gulnaaz spread like wild fire. Karrani himself wanted the news to spread. The Sultan knew Mukundadeva, an ardent Hindu, would never accept a convert as his commander. What he thought became true! Raja Mukundadeva severed all ties with Kalapahad. The Kalinga king even decreed that neither Kalapahad nor his sons would be allowed to enter the Jagannath temple. The convert did not lose hope. He approached the Hindu priests of the temple. But he was denied entry to the temple despite his repeat requests that he wanted to reconvert back to Hinduism and that he repented for what he had done. The Hindu priests refused to take him back to the fold of Hinduism.

A saddened, disheartened and angry Kalapahad went back to Sulaiman Karrani. He was all ready to take revenge against Mukundadeva and the Hindu priests of Jaggannath temple. Karrani grabbed the opportunity and recruited him as the commander of his army. It was the year 1568. Kalapahad immediately set to action. He marched towards Kalinga with a huge army of Muslim Afghan soldiers to attack Mukundadeva. Karrani sent along his son Bayazid Khan Karrani with Kalapahad.

Kalapahad defeated Mukundadeva in battle. The king signed a treaty and left the battlefield to deal with Ramachandra Bhanja, a feudal lord under him, who rose in revolt against him. Mukundadeva was killed in this battle against Ramachandra Bhanja. And Orissa fell in the hands of the Pathans – the Karrani Sultanate. Meanwhile, Kalapahad started sacking major towns and religious places in the Kalinga region including Hijli, Cuttack, Jajpur, Sambalpur, Konark, Ekamrakhsetra, Puri etc. He destroyed many temples including the famous Konark Sun temple and the Jaggannath temple of Puri.

Prof. K.S. Behera wrote in an article titled Gloom and Bloom : The Case of Jagannatha Temples in Midnapore District, ‘The famous Jagannatha Temple of Puri, the main centre of the cult in Orissa, was plundered by Kalapahar, the trusted general of Sulaiman Karrani in 1568. It is said in the Madalapanji that he damaged the tower of Badadeula upto Amla. He also damaged the images of all the Gods and tried to uproot the Kalpabata. He took away Shri Jagannath Mahaprabhu from Puri to Tanda located on the bank of the Ganga. There he put the image into flame.’

Kalapahad led other successful war campaigns for Sulaiman Karrani. He defeated Koch king Sukladhwaja, took him prisoner and besieged the capital of Cooch Behar. Karrani always feared an attack by the Mughals. Fearing an attack, Karrani restored Sukladhwaja back to power. The Pathan attempts of subjugating Bhurishrestha failed too. Such were the strong forces of Rudranarayan and later under Bhavashankari that even Akbar recognized the sovereignty of Bhurishrestha. Hence there was no hope left for the Karrani Pathans to attack or subjugate Bhurishrestha.

After the death of Sulaiman Karrani in 1572, his son Daud Khan Karrani became the Sultan of Bengal. In 1575, Bayazid Khan Karrani, brother of the Sultan, was treacherously murdered. Kalapahad, along with other Afghan leaders rallied around Daud Khan.

Kalapahad died soon after by drowning in a river in Sambalpur in Orissa. According to legend, Goddess Samaleshwari took away his life. As per other records, he encountered Mukundadeva’s soldiers by the river bank and that they killed him. Kalapahad’s death is shrouded in mystery.

Converts who wish for a Ghar Waapsi, reconverting back to Hinduism, should never be refused. They should be readily welcomed back following the required rituals and ceremonies. Had Kalapahad been readily welcomed, the destruction of temples would not have happened. Moreover, victims should avoid falling into the trap of love jihad. Had Kalapahad not fallen into this trap, the History of Orissa would have been different!