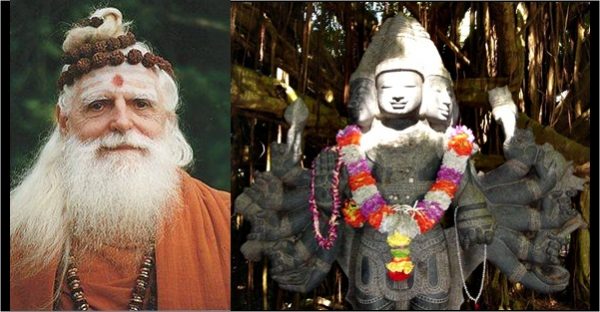 Along with many countries in Asia and Africa, Polynesia and Peru were part of a Worldwide Shaivite Culture that once encircled the globe. These Pacific regions once harbored a culture that had its most ancient origin on the legendary continent of Kumari Kandam (aka Lemuria and Mu), a landmass that was united with India as recently as 30,000 BCE. 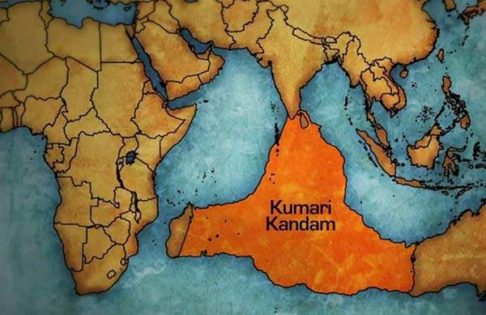 The natives of Kumari Kandum were spiritual adepts who covered their lush tropical homeland with temples and ashrams. In 1970, the great Shaivite Satguru from Sri Lanka, Sivaya Subramuniyaswami, was given a series of visions of the ancient Lemurian Shaivite Culture that had existed on Kumari Kandam upon arriving on the island of Kauai to build a Shaivite ashram.

According to Lemurian Scrolls, which is a compilation of Subramuniyaswami’s visions of Mu, after the satgruru arrived on Kauai Karttikeya opened the Akashi Records to him and proceeded to download into him the true history of Mu. With his Ajna Chakra or Third Eye fully open, Subramuniyaswami clairvoyantly perceived many enlightened adepts from all over the cosmos arriving on ancient Lemuria with the yogic practices and philosophy that would become the bedrock of Shaivism. One of these extraterrestrial adepts was Karttikeya himself, who arrived from the Pleiades with an entourage of yogic adepts and then became – in Subramuniyaswami’s own words – the “Celestial King of Lemuria.”

After Subramuniyaswami completed his visions he built a Hindu Ashram on the central volcano in Kauai in an area where a Lemurian temple had once stood. He then planted banyon and rudraksha forests in and around it, and within the banyon grove he erected a seven foot tall statue of six headed Karttikeya. Leading up to his mahasamadhi in 2001, Subramuniyaswami began work on Iravan, a Shiva temple he was instructed by Shiva to build. This great temple that is designed to survive one thousand years should soon be completed.

Around 10,500 BCE the planetary cataclysm known in many traditions worldwide as the Great Flood forced much of Mu below the Pacific Ocean waves. According to the record keepers of Hawaii, within their historical chant known as the Tumuripu this event is referred to as the “People of the Mu” fleeing their Lemurian homeland and migrating to India and Southeast Asia. After thousands of years the descendants of these refugee People of Mu then returned to the Pacific Islands as the Polynesians and reunited with the remaining People of the Mu they had left behind. A new Polynesian culture then emerged that was a synthesis of the old culture of the People of Mu and the Hindu culture that the Polynesians had assimilated while in India.

Within this new amalgamated Polynesian-Shaivite Culture the ancient continent of Mu was fondly remembered by a collection of names, including Hawaii-ti-Hawaii and the Land of Rua, an epithet which is ostensibly related to Rutas, a Sanscrit name for Mu that occurs in some ancient Hindu scriptures. Some of the ancient Hindu deities were also chosen to be part of the fledgling Polynesian-Shaivite Culture, including Karttikeya, who became known as Lord Ku, the Polynesian God of War and Fire. Ku is a Sanscrit term associated with fire and provides the prefix of Kundalini, the name of the fiery evolutionary force that many consider Karttikeya to be an embodiment of. There were also some other Sanscrit words and Shaivite Yogic practices that were adopted into the Polynesian-Shaivite Culture. Like the Hindu yogis, the yogis of Polynesia practiced asanas, controlled breathing and different forms of meditation to become enlightened adepts called Tahunas or Kahunas. The greatest Kahunas were the the Kaulas, a name that bares obvious resemblance to the exalted title earned by the yogic adepts of India’s Kaula Tantric tradition.

During this period when the People of Mu returned to the islands of Lemuria the Shaivite Siddha (Perfected Master) Agastya also returned to his homeland of Mu. Agastya, a close disciple of Karttikeya, had been the principal scholar and spiritual guru of a portion of Kumari Kandam known as the Pandyan Kingdom, but he fled his homeland when it sank to the bottom of the Indian Ocean and traveled north into south India’s Pothagai Hills. During his journey to the islands of Mu that had survived the cataclysm, Agastya is reputed to have visited the Indonesian islands of Java and Bali in order to spread the ancient Shaivite culture there. His influence can today be seen in the Hindu temples and flourishing Shaivite Temples of Bali. 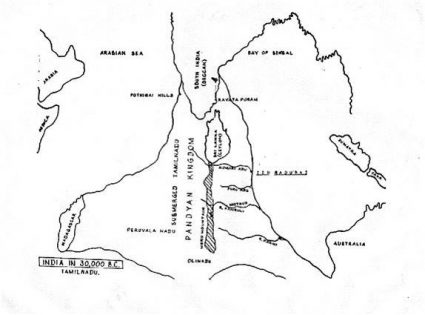 An abundance of Pacific Islands were eventually re-occupied by the returning People of Mu and many of them then exhibited at least some measure of ancient Indian and/or Shaivite influence. This was especially true of the island known as Rapa Nui or Easter Island that sits at one distant corner of the great Polynesian Triangle. Here the Easter Islanders revealed their link to ancient India by using a script that has been found in excavations of the Indus Valley. The Easter Islanders called this writing script Rongo Rongo, which unfortunately cannot be translated any more.

Their common script with the ancient inhabitants of Mohenjo Daro proves that there was a definitive link between India and the Easter Islanders many thousands of years ago. Perhaps one reason for the special connection between the two civilizations is related to their spatial locations on Earth. Mohenjo Daro and Easter Island are almost exactly on opposite sides of the globe from each other. It has recently been theorized that in ancient times certain places on the globe that were exactly opposite each other were strategically settled in order to help keep the Earth in balance. This includes Giza, Egypt and its polar opposite region of Hawaii, as well as Mt. Kailash in Tibet and its opposing region of Hopiland in Arizona. These opposing locations typically kept in contact with other and exchanged elements of their culture.

Indus Valley characters on the left and Easter Island Rongo Rongo script on the right.

The natives of Rapa Nui also carved and erected great stone images called Moai that reflected their connection to Mohenjo Daro. A kneeling and bearded Moai that still survives on Easter Island is almost identical to one found in the Indus Valley. A similar kneeling image was also discovered in a third location, Tiahunaco in the Andes Mountains, where one also finds vestiges of both the Hindu and Polynesian cultures.

Other Moais on Rapa Nui were carved with arms and hands that came together below the abdomen just like the ones recently discovered at the excavation site of Gobekli Tepe in Turkey, where 12,000 years ago ancestors of the modern Yezidis produced as Shaivite culture that contained temples in the form of Shiva Lingams. 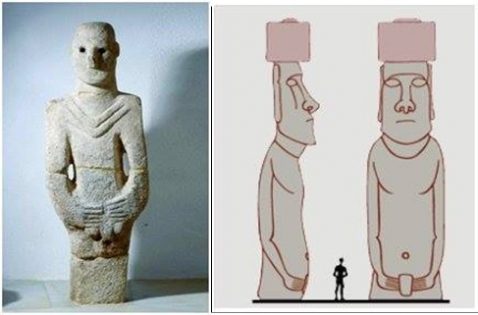 Image from Gobekli Tepe and Moai on Easter Island

A region nearby Easter Island that was deeply influenced by Polynesia and India’s Shaivite Culture are the Andes Mountains of Peru. Legends have it that many of the most ancient culture bearers of Peru’s Andean Culture arrived from the islands of the Pacific Ocean. Apparently these missionaries – known as Viracochas in the legends – brought with them some features of the Polynesian and Shaivite Culture, including yoga and Sanscrit. Because of their influence the native dialects of Quechuan and Aymara that evolved in the Andes became full of Sanscrit words, such as “Samana” and “Kala;” and, in fact, the name Peru may itself be of Sanscrit and/or Tamil origin. One of the inhabited regions of the ancient Pandyan Kingdom was called Peruvala Nadu, and one of its major rivers was named Peru Aru. As for Shaivite yoga finding a foothold in Peru, it is known that the ancient natives of the Andes had a good understanding of Kundalini and Chakras, which they referred to as Korimachakway, the “Golden Serpent,” and Waka Intis, “Sacred points of Light.”

Certain forms of yogic meditation, asanas (stretches) and controlled breathing (pranayama) were practiced in the Andes, and one yogic sect known as the Wankakilli Yogis were reputed to have observed extreme practices similar to those found in some yogic sects of both India and Tibet. Like their Hindu and Tibetan counterparts, these Andean yogis could melt blocks of ice while sitting on them, and they could dry icy towels during the coldest nights of the year with their body heat alone. These yogic feats were accomplished by raising the fiery Kundalini and moving its warmth throughout their bodies. Through their yogic practices many of the Wankakilli Yogis eventually developed special powers. With their powers they cursed the invading Spanish Conquistadors and soon afterwards their country of Spain suffered as series of defeats and lost much of its power and prestige in Europe.

Mark Amaru Pinkham is an internationally known author and researcher from Sedona, Arizona. He oversees the Order and Mystery School of the Seven Rays (www.SevenRayOrder.com).