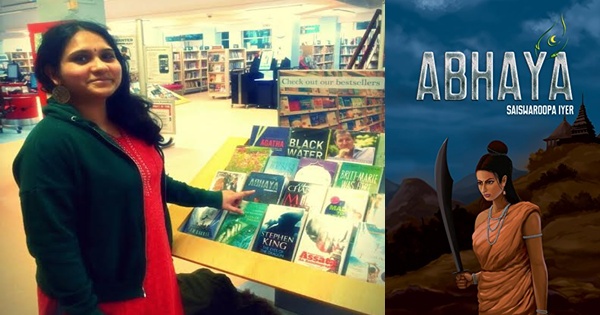 Getting robotically transported to the Mahabharata period through the protagonist of a book will happen with anyone who reads Abhaya. Every character and place will influence you as if you are yourself a character of that time! That’s the engagement that Saiswaroopa Iyer’s best seller Abhaya promises.

Saiswaroopa Iyer is an IITian and a former investment analyst turned author. Her keen interest in ancient Indian history, literature and culture made her take to writing. Her debut novel Abhaya, a best seller published in 2015, was set in the times of the Mahabharata. Avishi, her second novel set in Vedic India, explores the legend of India’s first mentioned female warrior queen Vishpala.

She holds a certificate in Puranas from Oxford Centre for Hindu Studies. She is also trained in Carnatic Classical music and has won a state level gold medal from Tirumala Tirupati Devasthanams.

Her exposure to stories from India’s ancient past since childhood and her training in Carnatic classical music had hooked her interest in Ancient Indian Literature and Philosophy. She owes a lot of it to the teachings of Bhagawan Sri Satya Sai Baba and Sri Ramakrishna Paramahamsa whose parables she grew up listening. With Abhaya, she took the leap of faith to live her dream as a story teller virtually living in the ancient past.

Here is an interview of Saiswaroopa Iyer, taken by Manoshi Sinha, Editor of My India My Glory.

What inspired you to write ‘Abhaya’?

Saiswaroopa Iyer: My love for Lord Krishna started very early in life. He has something that is endearing to every age group. Narakasura vadha was one such an episode which I specially loved. As an adolescent, I used to fantasize about being one of those maidens that he rescues and marries. But, growing up and reading more, one realises how grave the social crisis was. Other texts revealed a lot of fascinating facets of this episode. While Bhagavatam describes Narakasura as a yet another demon, the Shakta texts and legends of Kamrup describe him as a worshipper of Devi. Kalika Purana says that his devotion went the wrong way and he desired the Goddess herself which ultimately did not end well for him.

Now, going back to Devi Bhagavatam, a text that my mother used to read very regularly, we see that Krishna is placed alongside Devi as an equal to her. I found it a fascinating exercise to place the story in the interstices of Mahabharata and explore the social conditions as well and bring the so-called contending philosophies face to face. All this is seen by this fictional princess Abhaya who has her own adventures before ending up in ‘captivity’ of Narakasura (Bhauma).

When did you start writing?

Saiswaroopa Iyer: Pretty early I guess, the first of my published pieces being in Gokulam when I was in High School. Apart from the books I am working on, I blog about Indian history, especially Telugu literature and how it developed from early 11th Century.

Who are your inspirations? What motivates you to write?

Saiswaroopa Iyer: My mother is a literature major and I inherited the romantic streak from her. My characters are my motivations to write. When they grace me with compelling stories, it is hard not to write. My two most important inspirations are the poet-devotees Bammera Pothana who composed Bhagavatam in Telugu and Annamacharya who wrote thousands of compositions on Lord Venkateshwara. Both represent the pinnacle of scholarly knowledge while not losing contact with the grass root population.

What do you love reading?

Saiswaroopa Iyer: My reading interest started with publications of Bharatiya Vidya Bhavan (Amar Chitra Katha when I was young). The writings of KM Munshi, Rajaji and Kamala Subramanian served as a great beginning. Coming to South Indian writers, Kalki R Krishnamurthi for his vibrant characters and Adavi Bapiraju for his fantasy element and SL Bhyrappa for his bold portrayal of Indian past are my personal favourites. I can keep reading them forever and their books do have something new to offer every time I read. I have already mentioned the classic Telugu poetry. The creative liberty adopted by the medieval poets in philosophically re interpreting our epics is something to read and learn from.

Recently among the non-fiction books, I have come to admire the writings of Sanjeev Sanyal in understanding our history on our terms and those why Vamsee Juluri on Western academic biases vs ground beliefs of India. The world creation we see in Amish Tripathi’s books is another fascinating way to understand our past.

Is there any challenge while writing a book?

Saiswaroopa Iyer: No, no challenges at all. Of course, I am kidding! There are times when you feel the whole universe is conspiring to just stop you from writing your story. There are times where you feel the characters are playing sadistic mind games, revealing their story to you but blocking your mind as soon as you sit down to type. But in my highly imaginative comparison, writers are like those Rishis doing Tapasya with a thousand distractions. But even if they hinder us for a while, if we commit ourselves to our characters, I think we can stick to the story and write. I think the key is to get that first draft out without stopping ourselves. Quoting another successful author Laxmi Hariharan, we need to get out of our own way. We are our greatest challenge.

How many books have you written?

Saiswaroopa Iyer: Abhaya was my debut work of fiction. I also have a collection of literary essays on Medieval Telugu poets and literature called Creators of Telugu Epics (click here for free download). I also have in mind to compile a series of essays on the Telugu Bhagavatam itself. Some of them are published by Myind.net.

Do you research before writing?

Saiswaroopa Iyer: Writing and researching happen parallelly. At times, writing does take a back seat when research throws up new findings. With Abhaya, Narakasura being a Shakti worshipper was such a discovery which made me trash a whole draft and approach the story differently. The delay and the effort were totally worth it.

Please share with us about your future authorship ventures if any?

Saiswaroopa Iyer: My next work of fiction, Avishi is set in very ancient India, much much before the times of the Mahabharata. It is about the Rig Vedic Queen Vishpala who is fitted with a prosthetic leg when her leg is cut off in a battle. In fact, she is remembered in every worldwide event or conference on prosthesis, but pity we know and talk so less about the ancient legends that discussed such break through ideas. This venture of mine is a humble attempt to rediscover that ancient past where practices were not yet institutionalized and society was nascent. The book is to be launched in the second week of August. Hope you would like it. 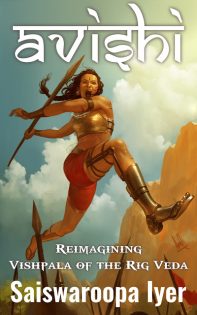 I am also attempting a couple of shorter works of fiction including a sequel to Abhaya and a long story based on an episode in Adi Shankaracharya’s life.

Your message to readers and aspiring writers

Saiswaroopa Iyer: Not qualified yet to advise, but it is highly beneficial for readers as well as writers to stay open to multiple viewpoints, interpretations from different sources and embrace the differences in those versions. As writers, we need to be humble about our own understanding and remind ourselves that our wisdom is influenced by our experience. I do see some modern writers resorting to a high-handed tone leaving no provision for alternate interpretations and at times, even twisting the sources to suit the points they are making. The financial lure of this ‘management lessons’ style is very strong. But it is important to remember that the stories survived through millennia because of the sheer ability to give timeless wisdom. Like the blind students exploring an elephant, each of us derive our own wisdom and it is important to not deride other interpretations.

To quote a review from Amazon on Abhaya: “Fantastic book. Great development of characters. Each character has a lot of life and reality. The plot is developed with lot of care, spanning from Dvaraka to Kamarupa the novel traverses the breadth of the subcontinent. Great plot development, with some really interesting social insights. It would be interesting to see part 2.
Good luck!” 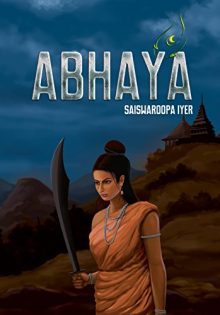