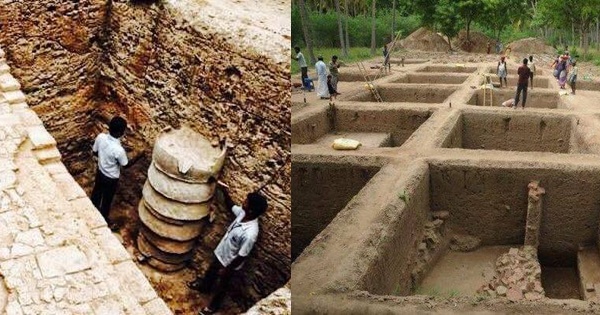 Have you heard about the excavations in Keeladi? “So much is buried in time. So many civilizations and histories are invisible. So much is unaccountable. India has so much to uncover.”

The holy River Vaigai is merely a trickle now, mostly covered by a green patch thriving from the water bed below the surface. The river bank is conspicuous of a dense cover of  thorny shrubs growing on white sand. Adjacent to the bushy landscape runs a highway which intersects this sleepy village and goes straight to as far as Rameswaram leaving Madurai 20 kms behind.

During the last four to five years, excavations carried out by the ASI along the banks of the Vaigai river from Theni to Ramanathapuram have resulted in the unearthing of an estimated 293 sites! Small settlements, ports, temples, and commercial sites have been identified in these excavated sites.

Take a right turn from the highway and you enter the village called Keeladi with vast plantations of coconut trees. The ground is covered with fine white sand and above this sandy ground are acres of coconut plantations. We took one more left turn from the burgundy colored board and followed the direction of the arrow towards our destination.

There was no road ahead anymore. The car drove aimlessly into a very large coconut estate; I haven’t seen a coconut plantation so large and up close before. The driver stopped and asked for some direction in local language from a group of plantation workers.

The car moved forward through an imaginary sandy road dodging between the endless coconut trees for a while and stopped in front of a dwarf looking camp site. We reached the “Excavation Site of Village Keeladi”.

In March 2015, The Excavation branch VI of Archaeological Survey Of India excavated a 2500 year old habitat under this 110 acres of coconut plantation!! About 4 meters below this thick cover of coconut estate is hidden an entire civilization claimed to be as big as Harappa or Mohenjodaro. This is the biggest ancient excavation site in south of India, probably from the Tamil Sangam era. The ASI team has been working on this project along the Vaigai river bed for quite some time now.

Also called Keezhadi, Keeladi, located near Silaiman on the border between Madurai and Sivagangai districts in Tamil Nadu carries the traces of an advanced civilization dating back to several hundred years. As per samples from Keeladi checked at Beta Analytic, a Miami-based radiocarbon dating laboratory, they date between 2,160+30 and 2,200+30 years ago. These samples had been sent by the ASI.

Excavation at Keeladi has been painstakingly slow, as moderate as 10 cm per day!! The biggest challenge for this site is that the estate is a private property and needs several legal approvals as well has firm government commitments for excavation work.

After working on about one acre of this plantation site, the ASI team could dig out a significantly large habitat, with closed drainage system, organic chemical/alchemy processing units, ring wells, small storage rooms, and much more. Few of the artifacts found in Keeladi include terracotta structures depicting earlobes, stone celts used for sharpening tools, circular and square coins from the Chola and Pandaya period, chess games made of ivory, arrowheads made of bones and iron, gold beads, iron implements like knives, daggers, etc.

There is a conclusive evidence of articles from foreign origin like Rome and Far East, firmly establishing a trade connect with West as well as East. The strong maritime dominance of ancient Tamil Nadu can be confirmed yet again from Keeladi excavations. This excavated site presumably demonstrates that the habitat could be an industrial town from 3rd century BC.

The excavation site however looks completely deserted now. Three small tent like structure with a very despicable bamboo gate is the official Keeladi excavation site. Mr K Amarnath Ramakrishna, the Superintending Archaeologist while sharing the images of his excavations told us that this extremely important project is currently halted for several months. All the trenches and excavated area has been covered with soil again!!

The open trenches are filled up with sand as it is easier to maintain a buried site than an exposed one. Currently lack of fund and administrative hurdles have left Keeladi excavations under a cloud of uncertainty. No doubt this is extremely frustrating.

Right below where we stood was an ancient civilization, a city probably matching the ‘Peru Manalur’, the city of Sangam Pandiyas mentioned in Tamil literature and yet for some strange reasons the CABA is delaying the excavation process! There is also a speculation that this could be the actual site of ancient Madurai city.

Over centuries many ancient cities have shifted around a few kilometers for various reasons. This could be ancient Madurai, which got relocated to the current location over time…

Thanks to the coconut groove which is a natural protection to this ancient city buried underneath, waiting to be excavated some day and offer a new chapter in Indian history. Till then Mr Amarnath waits indefinitely in the dwarf tents under the coconut plantation of Keeladi excavation site, imagining the rise and fall of an ancient city!!