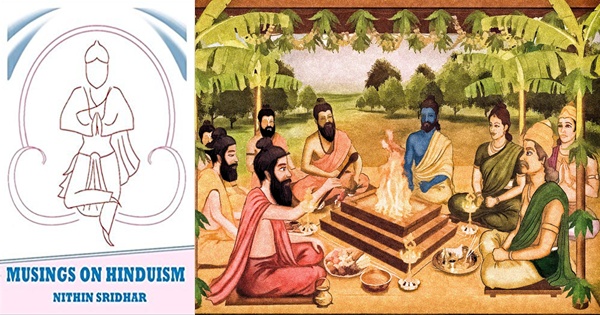 Here’s a dharmic analysis of Hinduism, its very essence being captured in Musings on Hinduism by Sri Nithin Sridhar. Shastras, Hindu Religion and Philosophy, Vedanta, Hindu Society, Translation of Sanskrit Hymns – these and more are covered in this book. Besides, the author touches upon some important contemporary issues concerning one’s perception of Hindu Dharma.

Musings on Hinduism provides an overview of various aspects of Hindu philosophy and society. The book is divided into five parts. Parts I and II deal with the important issues in Vedanta, such as the path of action and the path of contemplation, the transactional and absolute realities, the desire-driven karma and the desire-free karma, bhakti in the mode of duality and in the mode of non-duality and so on. The essentials of sankhya yoga, karma yoga and bhakti yoga are captured here with great clarity.

A question generally posed even by the educated is about the multiple gods we seem to have in our tradition. This has been an object of attack by the semi-learned scholars, devoid of exposure to our texts. All such doubts are clarified beyond doubt by the writer in an accurately measured manner.

The chapter “A deity can either be God or god or both” illustrates how the non-dual philosophy goes beyond monotheism and in fact, goes beyond an organized religion. It explains how the spirit of tolerance is ingrained in the Indian thought which accepts multiple forms for the same reality. As the writer has quoted Vivekananda, we move from a lower level of truth to a higher level of truth and not from untruth to truth.

To quote Aravinda Rao K., Former DGP, Member of Council of Indian Council of Philosophical Research, and Vedanta Scholar about Sri Nithin Sridhar’s book Musings on Hinduism, “The core of Hindu thought from the perspective of non-dual philosophy is presented in an almost comprehensive way in this handy volume Musings on Hinduism. The word ‘musings’ would usually offer an unfettered freedom to the writer to offer his own comments on a subject. But on a subject like Vedanta such an approach may sometimes go against the doctrine. The present writer, however, has not taken such liberty but has carefully presented the non-dual philosophy almost in a nutshell.”

The chapter on rituals removes the general prejudice against them and explains how they are probably more relevant today than they had been at any time in history. The writer tells how the modern Hindu is cut off from the sadhana path and explains how the rituals can help him to wean him away from mere ritualism and take him to a higher level.

Sri Shankaracharya, in his commentary on the Bhagavad Gita expresses the same opinion when he says (BG 2-10) that a person, while performing rituals, may lose interest in the fruit of that karma. This is because our sages have structured our rituals in such a way that they are at the same time rituals and philosophical exercises. They have interspersed rituals with philosophical suktas. The person performing the ritual may get enlightened by those suktas and come to the level of sadhana.

The chapters on tantra and sex in Hinduism are a bold analysis of the all-embracing, holistic approach of our ancients to life. The author describes with appropriate citations from texts and shows how sex was considered a sacred aspect of human life. The highly revered Brihadaranyaka Upanishad (6-4-3 and 6-4-20) discusses sex as yajna.  Tantra is largely mistaken even by scholars who usually treat it as a taboo. The ancients were probably not as prudish as we are today in accepting life.

Parts 3 to 5 of the book deal with contemporary challenges and the response of Hindu society to those challenges.

Aravinda Rao K. says, “Here the musings of the writer actively come into picture. The writer illustrates how the spiritual crisis in the Indian society is adversely impacting the social, political and economic arena. He has advocated the need for an Indian grand narrative for understanding Indian culture in the right way. 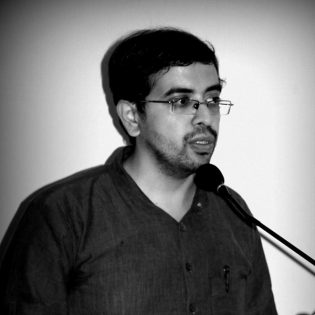 “The book makes a rewarding reading, presenting a comprehensive picture of different aspects of the non-dual philosophy, besides sensitizing the reader to contemporary developments.”

Here is what a reader Ganesh Nerur opines about Musings on Hinduism – “It is a great attempt to introduce the topic of Vedanta to the uninitiated. From that perspective, the book is an excellent foundation to the Vedic literature and Sanatana Dharma. Obviously, you cannot condense such a complex topic with rich nuances into a small book. But the author has given all that is essential to get started. The author has also given extensive references to Upanishads, Brahma Sutra and other Vedic literature for the earnest seeker to further pursue. The author very rightly points out to certain misconceptions in modern society like the relevance of rituals and how they are a must, should one want to really pursue the Purushartha seriously. The author has also touched upon subjects like Tantras and the role of sex in Hinduism which is hardly touched upon by most of the authors. He clearly brings out their role in the Dharmic life of a person. The translations of some of the chosen hymns also reiterate the earlier concepts laid out and will be helpful to us should we start reciting these hymns. The symbolism of Gods and some of the deities adds to our knowledge of the way our ancestors thought about everything when designing a Dharmic way of life, with the noble aim being to lead people towards the goal of Moksha.”

Another reader Mayur leaves a review about Musings on Hinduism on Amazon – “Two most important things that help the book stand out, 1) The author has a scientific temper and refuses to fall into the trap of “religion under attack” narrative forwarded by the more aggressive writers in this field 2) he demonstrates a remarkable grasp over a complex subject coupled with a mature, articulate narration that makes reading absorbing.” 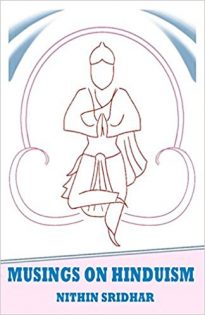 Click here to buy Musings on Hinduism from Amazon.

The author of Musings on Hinduism Sri Nithin Sridhar is Editor of IndiaFacts.org and Advaita Academy. He regularly writes on spirituality, religion, culture, politics, ecology, and social issues. Holding a degree in civil engineering, Sridhar has worked in the construction sector for some time. Previously he was a staff-writer with NewsGram.com. Few of his articles have been published in journals like Prabuddha Bharata, newspapers like The Pioneer, and magazines like Swarajya, Uday-India, Hinduism Today; and internet news-portals like vijayvaani.com. He tweets at @nkgrock.

20 Reasons Why You Must Watch ‘Baahubali’