Misrakesi, the Nartaki Who Became a Spy to Protect Chandragupta Maurya and Magadha 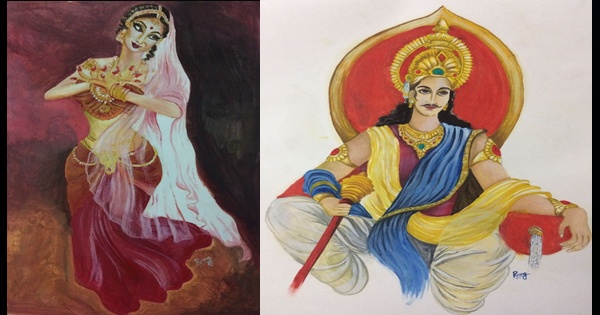 Fourth century BCE!! This abandoned and orphaned adventurer, raised in a rural agricultural family, saw a change of fortune after he came under the tutelage of Chanakya. The great teacher taught, mentored, and counselled the boy in the art of warfare, of politics, of everyday life. The Indian subcontinent, now home to the countries of India, Afghanistan, Pakistan, Nepal and Bangladesh, was then a battleground. The emerging kingdoms of the fertile plains of the Rivers Indus and Ganges were engaged in a fight to the death. Chandragupta emerged victorious with the help of Chanakya. He created a new empire and expanded it with Pataliputra as the capital city.

Misrakesi, a dancing girl from Ujjaini arrived in Pataliputra to avenge the death of her sister Sukesi. Instead, she ended up working for the state as a spy. Pushyamitra Sunga was the head of the Spy Service. She fell in love with him, her chief, who was caring but arrogant. They got married.

Chandragupta Maurya was under constant threat to his life. Misrakesi and Pushyamitra prevented the assassination of the Samrat. They plunged headlong into a life of peril, helping to safeguard the Mauryan kingdom from enemies within and without; whether in the capital city of Pataliputra or in far off Takshshila. They solved the mystery of counterfeit currencies flooding the fledgling Mauryan Empire and upstaged the brilliant Maha Amatya of Kaikeya Rajya to incorporate it into the Mauryan Empire of Chakravartin Chandragupta Maurya. They helped fulfill Acharya Chanakya’s desire of facilitating the political unity of Jambudweep (the name of ancient India).

Does Misrakesi find happiness or tragedy in the arms of Pushyamitra? Read Urnabhih to know in detail.

This historical fiction set in the times of the Mauryans, the same time as the death of Alexander, the Greek conqueror, as he was withdrawing from Northern India, is the story of that fight for supremacy, a fast moving story of espionage, subterfuge and adventure in Ancient India! This is the first book in the Urnabhih series. This book is at the interstices of a new understanding of gender, power politics and society in the formation age of India and will follow the Mauryans, Sungas and Satvahanas through the books in the series.

The author Sumedha Verma Ojha and her book ‘Urnabhih’

Here is an extract from Chapter 1 of Urnabhih:

“She stood quietly inside the great pool filled with marigold petals, while her body was rubbed down with sandalwood and turmeric and her hair washed with perfumed water. It was a great day: the accession of Chandragupta, the goatherd, who should rightly look after cows and goats, to the throne of Magadha – the richest, most prosperous and strongest Janapada, the mightiest kingdom of the world; and ready, if the wily and wise old Chanakya had anything to do with it, to extend itself over all of Jambudweep and more.

Misrakesi looked around at the beautiful inner courtyard – which was deep within the Sugaang Praasaad, the royal Mauryan palace – with its delicate paintings on the walls of the corridors surrounding it. She had come here but recently, not even a fortnight ago. Her throat tightened when she thought of the reason. Her sister, Sukesi, the leading ganika and exquisite dancer, the jewel of the Magadha court… was dead… and dead by her own hand. All because of Vishnugupta Chanakya.

Well, she would exact her revenge today. She was to dance after the rajyabhishek, the anointing ceremony, with all the new power and bureaucracy of Mauryan Magadha surrounding her. As the guide and preceptor of the samrat, Chanakya would surely be there. She would take care to hide her tiny poisoned dagger in the folds of her richly embroidered silk mantle, and then she would strike. Killing the Samrat’s guru in the open court would expose her to the most acute retribution and she would probably die a terrible and lingering death but… Sukesi had to be avenged.

A celestial vision unfolded: a graceful nartaki, like a blue lotus in full bloom swaying with the breeze, came in and exhibited her flawless skill and precision leaving the audience dazzled. It was the culmination of years of practice and devotion, a gruelling routine that would have defeated a lesser woman. The dance ended leaving the assembly, especially the male portion of it, asking for more.

Misrakesi retired to the palace room that had been specially arranged for her. She lay back on the low wooden bed and reached for the polished black clay pot which held cool water. There was some gur beside it and she absently crumbled it between her fingers. Her next move was to look for Chanakya in the huge wooden palace complex. He had not been present at the dance performance. She had no idea where to look for him.”

Sumedha Verma Ojha is an author, columnist and speaker. She was born in Patna and educated in Delhi, graduating in Economics (Lady Sriram College) and post-graduating in Sociology (Delhi School of Economics). After 2 decades in the Indian Revenue Service, she switched careers to research and write a book set in the Mauryan period based on the Arthashastra of Chanakya. Urnabhih then expanded into a book series on the Mauryan Empire and its successors.

Sumedha now works in the area of translating and explaining the epics and bringing ancient Sanskrit/Prakrit literature to the world as also in the area of a gendered analysis of ancient India. Through her talks across the world she tries to bring the influence, beauty and soft power of Ancient India alive again. She lives with her husband near Geneva and has two children both studying in the US.

Besides Urnabhih, published by Roli Books in 2014,  Sumedha Verma Ojha authored The Mewar Ramayana (Awarded by the Federation of Indian Publishers), published in 2016 by the same publisher. Her forthcoming books include Urnabhih Book 2 and The ‘Modern’ Women of Ancient India  (2017). Urnabhih is all set to be released as a TV series soon.

Featured illustration of Misrakesi and Chandragupta Maurya by Ruchira Nag Verma. An artist by passion, a travel buff, and trained in classical vocals and sketch art, she is based in Delhi.