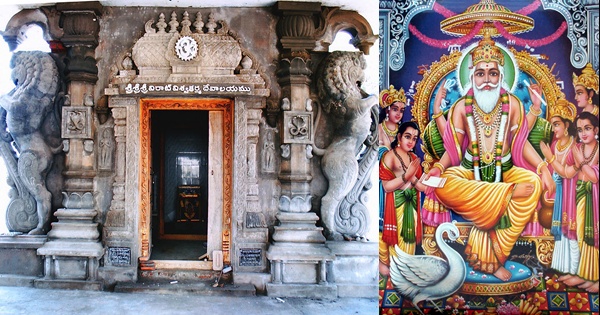 He is the divine engineer of the world. He is the Hindu God of engineers, architects, industrial houses, mechanical workshops, artists, and craftsmen. He is the God of weapons and missiles, vehicles and flying chariots, tools and iron equipment, plough and agricultural equipment. He is the official builder of all the palaces in heaven.

He is personified with the supreme worker and of excellence and quality in craftsmanship. He is the personification of creation and the principal architect of the Universe. The Rigved mentions him as the abstract form of God and the Ultimate Reality. The Upanishads mention him as the root concept of Brahman and Purusha. Vishwakarma is the son of Brahma. His vahan (vehicle) is the elephant.

According to the Mahabharat, he is ‘the lord of the arts, executor of a thousand handicrafts, the carpenter of the gods, the most eminent of artisans, the fashioner of all ornaments’.

Come the day of Kanya Sankranti, when Surya leaves Simha rashi and enters Kanya rashi according to the solar calendar chart, Hindus across the world commemorate Lord Vishwakarma. It falls in mid September according to the Gregorian calendar. Sculptures in temples and scriptures depict him with four hands holding a water-pot, a book, a noose and craftsman’s tools and seated in an elephant.

3. Dwarka, Hastinapur, Indraprashtha in the end of Dwapar Yug.

Was it Ravan’s Lanka that Vishwakarma built? According to the Ramayan, Vishwakarma built the city of gold and a beautiful palace for Shiv and Parvati upon Shiv’s request. Shiv invited Rishi Pulastya to perform the grihapravesh ritual. Rishi Pulastya was the grandfather of Kuber and Ravan. After the grihapravesh ritual was over, Shiv asked Rishi Pulastya to ask anything in return as dakshina. The sage asked for the golden city and palace as his dakshina. Shiv agreed to the sage’s request. Rishi Pulastya later gifted it to his grandson Kuber who ruled Lanka for a long time residing in this palace. Ravan overthrew his half brother Kuber and took over the city of gold from him.

The Yajur Ved mentions him as Prajapati. He is known as Pashupati in the Atharva Ved. Here are 108 names of Lord Vishwakarma:

Who isn’t familiar with Indra’s weapon vajra! Vishwakarma created the vajra from the bones of Sage Dadhichi. Once, the Asurs defeated the Devs and ousted them out of heaven. It was learnt that a powerful weapon created out of the bones of a sage could help drive the Asurs out of Swarg. Sage Dadhichi sacrificed his life for the Devs. Vishwakarma created the vajra for Indra, the king of the Devs. Using this weapon, Indra defeated the Asurs and reclaimed heaven.

Devotees worship Lord Vishwakarma to bless them with increased productivity and creation of novel innovative tools, equipments, and related products. Mechanical workshops, factory premises, and many a Hindu family install the idol of the Lord and celebrate with great pomp and show. With Ganesh puja and Vishwakarma puja, the festive season of the Hindu calendar starts!

Source of 108 names of Vishwakarma: Dharmavidya.com