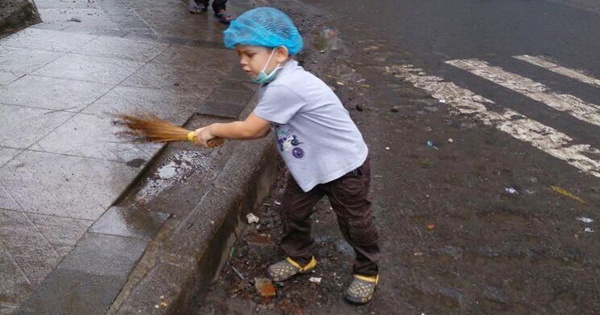 The ‘Swachh Bharat Abhiyan’ that has been initiated by our Prime Minister is commendable. But I couldn’t help having self-pity on the state of our country where basic thing like cleanliness has to be implemented in this way. We need our Prime Minister to tell us to be clean?

Every now and then I see pictures in social media of people engaged in ‘Swachh Bharat Abhiyan’ proudly cleaning their surroundings or public places. It feels good to see people coming forward and extending their hand in making this initiative a success. But it is also true that nothing will last until and unless every single person wishes to do so. Or else, this will pass as another social media trend. Whenever I witness people throwing wastes anywhere and everywhere, not keeping public places clean, not caring for their surroundings, I feel really hopeless. In a country where ‘Cleanliness is next to Godliness’ has been the mantra since ages, what went wrong and where did this catastrophic behaviour of people originate from? I am baffled.

Swachh Bharat Abhiyan is actually an ancient concept. Let me for a moment forget the fact that excavation of the Indus valley civilization showed perfect drainage, public sanitation system, well-built hygiene and cleanliness facilities in ancient India. Let me also ignore the Vedic age when unclean practices were said to be punishable according to religious teachings and, if not for anything, people would follow guidelines given in Shashtras just to avoid ill-fate.

Wise sages predicted devastating consequences if things are not followed as rituals or customs. In the context of cleanliness, religion describes well how to cleanse body, mind and surroundings for the well-being of a person. As I said, let me keep aside all these evidences from ancient India and talk about what I have seen as a child. That is not too far ago a time. I assume that since it was prevalent in my sleepy town in the remotest corner of India, same must have been in other places as well. 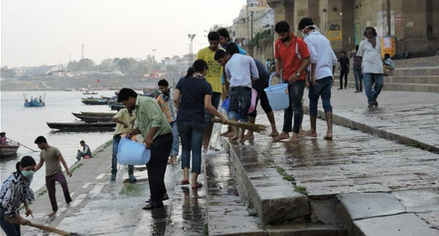 To begin with, we had such limited wastes at that time. I am not talking about industrial wastes but more specific to household wastes. Cleaning ourselves, our home and surroundings and, if possible reuse. It was quite simple. Cleaning your own body and the house everyday is a ritual every household in India follows.

In my childhood, every house had an open space or lawn in front and back of the house. The front was decorated with various flowering and ornamental plants while the backyard had kitchen garden and many fruit trees. A pavement led from the road to the front door of each house amidst the colours of nature. One of the rituals along with bathing and house cleaning was to clean the lawn on either side of the house every morning. It was a clean home, a clean locality, a clean state, and a Swachh Bharat!

Mostly dried leaves, fallen flowers or over-ripe fruits were the trash which were gathered and put in a pith at the far end of the backyard for composting. No, not everybody had the luxury of big open spaces and garden or the place to prepare compost. But then, they didn’t have the waste dried leaves either. Nobody dumped the trash on a neighbour’s courtyard or front. There were a number of open agricultural fields which always needed compost and farmers had their own composting areas. The trash could be put there with due permission without harming the environment or littering the place. The wastes from vegetable market found their way there.

Do you wonder if we were disturbed by the stinking compost? No, we had beautiful smells of flowers and fruits of every season to mask those and moreover, burning of incense sticks at home morning and evening during puja left no room for those foul odours.

As the roadsides were dusty, people splashed water on the road during dry season to prevent the dust from spreading to the house and other clean areas. Nobody thought this to be a burden but it was a part of every household or, for that matter every shop’s morning duties. Nobody did it for anyone else but for themselves. Nor did anybody think somebody else has to be appointed to clean our roads. Come evening and it was customary to switch on the light on the veranda after lighting the clay lamp (diya) and offering evening puja. At a time when street lights were yet to be the norms of streets, these lights from the veranda of each house lighted the way for the convenience of the travellers. People were always concerned about their surroundings.

Kitchen waste was never thrown away. Left-over food was either fed to the cattle or if, they don’t have a cow, it went with other food wastes for the compost. No, cows were not considered as dustbins. Every cattle owner had a big vessel where they cooked food for the cows in the backyard and the left-over food, which was suitable as cow feed, or grass was added to it.

Talking about grass, our milkman would sometimes ask my parents if he can cut the overgrowing grass in our lawn to feed his cattle. It was such a beautiful way of mutual benefit. He got the grass while our lawn was mowed. Some food wastes like tea powder, after the concoction was made, were thrown directly near the roots of plants for people knew the benefits of tea as fertilizer.

People burnt the coir or coconut fibre, left after coconut was used, in the evening to ward off mosquitoes and insects. It was part of the evening prayer. There was no kitchen waste dumped in any personal or public space.

The structure of the house was another aspect contributing towards cleanliness. Often kitchen was not a part of the main house. Or if it was, it was at the far end towards the back. This was for two reasons. First, to maintain the hygiene in kitchen and food, away from the hustle and bustle of the main house and second, to keep distraction at bay for aroma of food being cooked can disturb other important work going on in the household (studies, etc.).

Nobody could enter the kitchen before his/her bath. Food was cooked and served only if you have cleansed your body. Since we eat with our hands, it was mandatory to wash hands before eating and after every meal, the kitchen was scrupulously cleaned. Same was with the toilet or bathroom. It was built far in the backyard to avoid contaminating the main house. Every time you had a call from nature, you had to take a bath to enter the main premise of the house.

Later on, kitchen and washroom became a part of the main house but the habits remained the same. Drainage system efficiently carried the waste water out of the house to the big drains on each side of the road which finally met bigger water bodies. 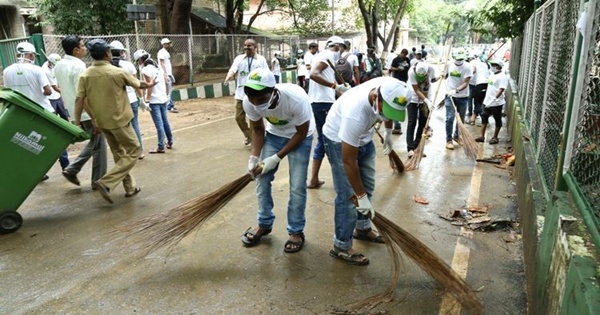 In earlier times, almost every house had a pond to take care of the need of water and it was maintained to have clean water apart from rain water harvesting. In ancient times, before concrete roads were built, it was mandatory for everybody to wash their hands and feet before entering the house. A bucket of water was kept in front of every house for the purpose.

With time, although roads were built, the hose pipe used to water the plants in the courtyard was used to clean hands and feet by travellers before entering the house. These days, it is not that much needed but the practice of washing hands and feet after coming back home is prevalent everywhere. That is the first thing to do and unless you have done that, mom won’t serve you food.

Plastic had limited use in those days. Groceries came in either jute bags or paper bags made of old newspaper with home-made adhesive (mixing flour with water). I remember people coming to buy old newspapers and magazines from every home and selling them to grocery stores where one of the duties of the staff after business hours was to make those paper bags of different sizes. Our parents went to market with their own respective shopping bags which were regularly washed to avoid any smell or dirt.

I remember my father bringing rasgullas in earthenware pots from the confectionery shop. Those pots were locally made by the potters with easily degradable materials. Plastic was not a need at that time. Even when paper cups became a craze followed by plastic cups, people preferred to have tea or beverages in normal washable and reusable cups because I remember, people commenting tea didn’t taste the same in plastic cups.

I have witnessed the rapid invasion of plastics in our lives. People chose the cheap, use and throw, handy material over other traditional things. Plastic was not the problem, but injudicious and over-use was. Unfortunately, good sense overpowered comfort. Our generation has seen the change in people’s attitude. How people slowly were reluctant to use cloth bags for you don’t need to wash and maintain plastic bags. How kitchen wastes were piled up in streets for there were no cattle in the neighbourhood to be fed nor did people want to make their own compost. People preferred to buy chemical fertilizers than to utilize bio wastes.

Houses were built but without proper drains. The roadside drains were stuffed with trash blocking the waterway and creating more hazards. There was a drastic increase in use of plastic but no provision for recycling. Roads were no longer cleaned by people for everybody thought it was government’s job to keep them clean. We paid the taxes, didn’t we?

Overall, things changed when people started disowning their own surroundings. Earlier it was our house, our road, our neighbourhood. Then it was restricted to only our house. Public property was not ours. We were not the public. Public was always “The public” not “we”. This made a lot of difference.

I wish this ‘Swachh Bharat Abhiyan’ brings back the common civic sense in every Indian and we can go back to those days of breathing fresh air and walking on clean roads.

A learner, a mother, a researcher, a dreamer. When I am not running after my toddler, I am a post doctoral researcher in Microbiology at NAS, South Korea

Latest posts by Swarnalee (see all)

Temsutula Imsong: India’s Beti from Nagaland, Who Cleaned the Ganga Ghats of Kashi

Hammurabi: How Aryavart Once Spanned Bharat to Babylonia and Sumer