How British and Missionaries Created Conflicts in name of Tribal Protection 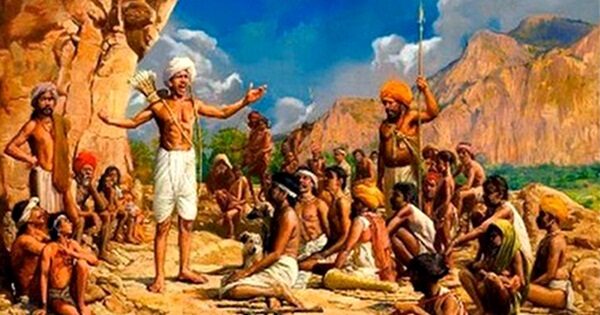 Few days back while flipping through the NCERT chapter on tribals, I came across a significant line which states “Before the arrival of the British, in many areas the tribal chiefs were important people. They enjoyed a certain amount of economic power and had the right to administer and control their territories. In some places they had their own police and decided on the local rules of land and forest management” and this information jostled me to pose an iota of faith in far too bashed NCERT books.

Being a student of Constitutional Law, I always ponder as to why there is a requirement for separate protection to the tribals in India when ancient Indian literature is full of equal treatment rendered to them by Bhartiya Kings. Enroute my study on the topic I decided to take help of NCERT books on this subject and to knock my socks off I received affirmative information that the tribals were not only enjoying equal rights with the rest of Bhartiya population but also were having complete control on their territories. The obvious conclusion was that the Britishers interfered with the Tribal lives for their colonial and religious interests that culminated into the real conflict between government and tribals therefore the regulation of tribals was prerequisite for British government however, why the same mechanism was continued even after independence of the country with the Constitutional protection. The said confirmation by the Constitutional insulation to Tribals unnecessarily affirmed by some unscrupulous writers as admission of ‘Historical wrong’ by Indians to the Tribals though actually it was a sin committed by British in India. This was uncalled for ‘pious obligation’ imposed on Bhartiya through the Constitutional mechanism though some of the clairvoyants in the Constituent Assembly portend about indelicate permanency for such protectionism.  The prominent example was Mr. H.V Kamath who identified that the permanent protective status for the tribals would be tantamount to dice with death and instead amelioration of tribals such type of provisions shall cause more and more deprivation for the tribals. He therefore urged the Constituent assembly to empower Parliament to repeal the special protection granted for the tribals after a certain timeline without effecting any amendment in the Constitution.

The agenda of missionaries for India was clear and East India Company refused to provide necessary facilities and protection to them in Bharat which did not go down well with these religious zealots who were determined to carry out proselytization in Bharat. The reasons for ouster of East India Company were not only 1857’s war of Independence but her unsavory attitude towards missionaries as well.

It is on the record in the census report 1931 that 88 percent of Christians in Bihar and Orissa were provided by only four tribes namely Oraons, Santhals, Kharias, Mundas.

The rights granted for the tribals under the Constitution range from provisions for statutory recognition (article 342); proportionate representation in Parliament and state legislatures (articles 330 and 332); restriction on the right of the ordinary citizen to move freely or settle in particular areas or acquire property in them (article19(5)); conservation of one’s language, dialects and culture, etc (article 29). The Constitution also has a clause that enables the State to make provision for reservation in general (article 14(4)) and in particular, in jobs and appointments in favour of tribal communities (article 16(4)). These rights are prone to misuse nay these are blatantly misused by missionaries, Corporates, Politicians and pari passu. Right to propagation of faith or religion coupled with special provisions for the tribals has stood in ugly stead and missionaries have exploited these two provisions for proselytization and rampant conversations.

Catholic Bishop Council of India once reported that in the last thirty years the catholic population in North East increased none fold to nine lakhs while in Arunachal Pradesh 10000 people were joining Church every day half out of them became Catholics. Remember this report evinced only a catholic spread in the North East leaving aside conversions in other factions of Christianity including Protestants. The same report further mentioned that one eleventh of the total number of Catholics in India were in Chota Nagpur. The alarming fact about North east and Chota Nagpur was that both the regions could be enumerated as tribal regions in India.

The aphorism ‘once Tribal always tribal’ is perpetrated by stringency of legal protection provided to them but it is double edged sword and if fallen in the hand of missionaries could lacerate social fabric lying at the base of Bharat. Protection provided by Constitution and Law to the tribals is abused in several instances by Christian missionaries; the latest in this series was a probe initiated by Chief Minister of Jharkhand Raghubir Das. The issue of land grabbing by Missionaries under two state laws called Chota Nagpur Tenancy Act of 1908 and the Santhal Pargana Tenancy Act of 1949 was being investigated. These two acts prohibit outsiders buying Tribal land. Most of the state’s 1.5 million Christians are tribal people and many Christian institutions and parish churches stand on land said to have been donated by them.

The attempt of the state government to set at naught the illegal sale to Christian institutions was a cog in the wheel however, not an end in itself. Imagine there is no direct sale or purchase of the tribal land by missionaries, would that nullify the fact that the land belongs to the tribals who have relinquished their faith and embraced Christianity and is it not possible to erect churches on the land of tribals without any conveyance of title to missionaries and once the structures erected on the land with the consent of the tribal having allegiance to Christianity could that easily be demolished. Answers to all these questions are not easy.

The vital element in Christian missionary work in Bharat is that they have no objection to the seepage of cast system in Christianity which is fundamentally against the canons of Christianity, nor any special efforts had been initiated by these evangelists to eradicate castes among converted dalits and tribals thus it seems that apart from conversions these missionaries have agenda of amassing land and natural resources in India also they wish to influence policy making through Tribal and Dalit vote bank.

The time therefore has come to put in place necessary mechanism to stop missionaries abusing special protection provided to the tribals and dalits under the Bhartiya Constitution. The autonomy in the tribal belt is provided to protect their indigenous culture and resources however, that autonomy itself is under threat as anti-Hindu forces are allowed to perform their activities in the name of modernity and bringing these tribals into the mainstream. We have to accept the fact that their unique identity could not be preserved under the current of false modernity. All competent authorities should keep their powder dry to place the anti-Hindu forces at bay.

Shrijeet Phadke is a Lawyer by profession and writer by passion. He writes on various topics pertaining to Law, Economics, Politics, Culture, and History.