To What Extent Is the Constitution of Bharat Applicable to Hindus 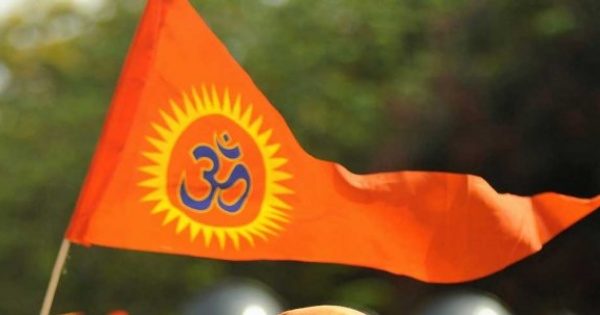 Hindutva is oft debated topic in the contemporary discourse. Various scholars have attempted to define, dissert and delve deep into the subject nevertheless there is no dearth of brick batters who every now and then like to take digs at the proponents of Hindutva ideology. It is, however least debated as to what extent the Constitution of Bharat is applicable to Hindus therefore this article is an attempt to actuate debate in that direction.

The Constitution of Bharat is a much hallowed document and the dark past of partition before the drafting and enactment of it made our Constitution holiest for the simple reason to avoid any strife in the society on the basis of religion. In this scenario several provisions had been enacted in the Constitution to shun dominance of the majority populace on minorities. A term ‘secularism’ though not incorporated at the time of drafting of the Constitution became raison d’etre owing to systematically embedded discourse in that direction. The then leadership in Bharat had wrongly considered ‘Hinduism’ as a religion, though it amounts to gross misinterpretation and later on put to bed by the Supreme Court of Bharat which is wielded with ultimate power to interpret the holy book i.e. Constitution of Bharat.

The question therefore is that if the Hinduism is not a religion, then will the provisions of the Constitution dealing with the religion be held applicable to Hindu community on the whole and if yes to what extent hence it is worth to appreciate the issue in detail. Let us understand first as to what is the exact interpretation of Hindutva on the premise of the judgment of Supreme Court of Bharat.  The famous judgment passed in 1995 in the case of Dr. Ramesh Yahswant Prabhu V Prabhakar Kashinath Kunte & Others dwelt upon the concept of Hindu, Hindutva and Hinduism and referred to various scholarly opinions on the subject. It is finally held that Hindu is a geographical term and has no allegiance to religion in strict sense also the Hindutva is way of life having a certain set of common believes however adherence to the same is not mandatory.

Monier Williams has observed that “it must be borne in mind that Hinduism is far more than a mere form of theism resting on Brahmanism. It presents for our investigation a complex congeries of creeds and doctrines which is its gradual accumulation may be compared to the gathering together of the might volume of the Ganges, swollen by a continual influx of tributary rivers and rivulets, spreading itself over an everincreasing area of country and finally resolving itself into an intricate Delta of tortuous steams and jungly marshes…. The Hindu religion is a reflection of the composite character of the Hindus, who are not one people but many. It is based on the idea of universal receptivity. It has ever aimed at accommodating itself to circumstances, and has carried on the process of adaptation through more than three thousand years. It has first borne with and then, so to speak, swallowed, digested, and assimilated something from all creeds”

Several articles of Constitution when talk about the prohibition of discrimination only on the basis of religion, Hindu dharma does not qualify for the same and therefore the special concessions could be very well provided to Hindus without flouting prescriptions under the Constitution however all the rest of the religions fall in the definition of ‘religion’ in strict sense to which the articles in the Indian Constitution dealing with religion apply squarely.

The Constitution of India fails to define ‘religion’ however if the definition of Hindu religion as stated in Hindu marriage act is adverted to then it comes out that Hindu is inclusive in nature and it encompasses everyone in India except Scheduled Tribes covered under clause 25 of Art.366 of Indian Constitution, Muslims, Christians, Parsis or Jews therefore the strict tenets of word religion are not applicable to Hindu religion. The religion in traditional sense rules the temporal issues in society and even it is affirmed that Hinduism also postulate it, almost all of the scriptures are more like directory in nature without any rigors and non-followers of  those scriptures are not considered as non-Hindus further the concept of Dharma which is on higher pedestal as it holds spiritual, scientific ground and there are ample examples in Hindu Upanishad or Puranas which establish the fact that in case there is any conflict in religion and Dharma, the latter shall prevail.

Whenever government in India introduces Surya Namaskar or Yoga or snippets from Bhagwat Geeta, so called secular forces throw unnecessary tantrums and incite fear mongering, however they fail to understand that the Constitution has no scope while dealing with a ‘Dharma’ though it may control religion to some extent. Hindu scriptures which talk about Dharma can very well be incorporated in the curriculum without contravening a mandate of Constitution.

Here it is pertinent to quote Mr. H.V Kamath, who argued for separation of Dharma from religion in the course of his debates in Constituent assembly. He was arguing in the Constituent assembly that the state should not be prevented from “imparting spiritual training or instruction to the citizens of the Union” in support of his proposition he said “Sir, I would like to draw the attention of the House to the value and the importance that all our teachers, from time immemorial, from the Rishis and the Seers of the Upanishads down to Mahatma Gandhi and Netaji Subhas ChandraBose have attached to spiritual training and spiritual instruction. Netaji Subhas Chandra Bose went to the length of prescribing spiritual training and spiritual instruction to the soldiers of the Azad Hind Fouj. In the curriculum, in the syllabus of the Azad Hind Fouj, this item of spiritual instruction was included. (When I say, Sir, that the State shall not establish or endow or patronise any particular religion, I mean the formal religions of the word; I do not mean religion in the widest and in the deepest sense, and that meaning of religion as the highest value of the spirit, I have sought to incorporate in the second part of the amendment. That is, the State shall do all in its power to impart spiritual training and spiritual instruction to the citizens of the Union.) In the end, I would only say this. We are living in a war-torn, war-weary world, where the values of the spirit are at a  low ebb, or at a discount. Nemesis has overtaken the world which has lost its spiritual value, and unless this world returns to the Spirit, to God in spirit and in truth, it is doomed Sir, I commend my amendment to the acceptance of the House”.

Hinduism is more in the form of Dharma than a religion giving much more leeway to it under the Constitution of India for special status as the Constitution prohibits discrimination only on the basis of religion which means if there are other factors involved calling for a protection other than sheer religion, the state is empowered to discriminate.

The other factor is vulnerability of Hindu Dharma in India due to its inherent nature of assimilation. This point was discussed in Constituent Assembly by Mr. Lokanath Misra while opposing a right to propagate religion as guaranteed under our Constitution. Mr. Misra said “We have no quarrel with Christ or Mohammad or what they saw and said. We have all respect for them. To my mind, Vedic culture excludes nothing. Every philosophy and culture has its place but now (the cry of religion is a dangerous cry.) It denominates, it divides and encamps people to warring ways. (In the present context what can this word `propagation’ in article 19 mean? It can only mean paving the way for the complete annihilation of Hindu culture, the Hindu way of life and manners. Islam has declared its hostility to Hindu thought. Christianity has worked out the policy of peaceful penetration by the back-door on the outskirts of our social life. This is because Hinduism did not accept barricades for its protection. Hinduism is just an integrated vision and a philosophy of life and cosmos, expressed in organised society to live that philosophy in peace and amity. But Hindu generosity has been misused and politics has over run Hindu culture.”

For the last seventy years, Hindus have been confined to debate on secularism however a special status of Hindu Dharma though articulated in Constituent Assembly debates and later on confirmed by Supreme Court of Bharat had been given a little attention. The applicability of Constitution of Bharat to Hindus is required to be debated extensively. It is also necessary to discuss nuances of religion and the Dharma in the light of the Constitution of Bharat. Bharat should also refrain from applying international charters/conventions blindly given the fact that it is the only nation in the world having Hindu population in the majority. The glory and heritage of Bharat lies in prosperity of Hindu values which are very well affirmed by Constitution of Bharat however the only regret is that Hindus are not doing enough to interpret it in true spirit.

Shrijeet Phadke is a Lawyer by profession and writer by passion. He writes on various topics pertaining to Law, Economics, Politics, Culture, and History.