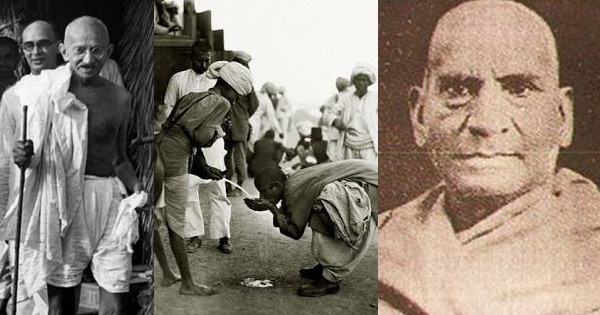 Swami Dayanand’s work Satyarth Prakash declared equal rights for all castes, the right for education, right for reciting Vedic mantras, right for interdining, right for marriage, right to fetch water from common wells. According to Swami Dayanand, any caste or Varna was purely based on characteristics not on the basis of birth.

Swami Shraddhananda joined the Indian National Congress in 1919. With the passage of time in political scenario differences between Swami Shraddhananda and Mahatma Gandhi appeared on various issues. May it be the difference on participation in Hunter Commission or about Montague Reforms, non cooperation movement, burning of foreign cloths, Bardoli Satyagraha, monopoly of Gandhian methods of working, decision without consulting committee etc. etc. These were minor issues but the main difference was on the issue of untouchability and Hindu Muslim relations.

Since his joining in politics, Swami Shraddhananda was continuously motivating Indian National Congress to deal with the problem of untouchability at national level with extensive measures. In his chairman address of Amritsar congress (1919) he strongly expressed his feelings as “Is it not true that so many among you who make the loudest noises about the acquisition of political rights, are not able to overcome their feeling of revulsion for those sixty millions of India who are suffering injustice, your brothers whom you regard as untouchable? How many are there who take these wretched brothers of theirs to their heart?…give deep thought…and consider how your sixty million brothers-broken fragments of your own hearts which you have cut off and thrown away- how these millions of children of mother India can well become the anchor of the ship of a foreign government.”

“I make this one appeal to all of you, brothers and sisters. Purify your hearts with the water of the love of the motherland in this national temple, and promise that these millions will not remain for you untouchables, but become brothers and sisters. Their sons and daughters will study in our schools, their men and women will participate in our societies, in our fight for independence they will stand shoulder-to-shoulder with us, and all of us will join hands to realize the fulfillment of our national goal” (Quotations from original Hindi texts of the swami’s Amritsar conference address obtained from Gandhi memorial museum, Delhi).

Swami Shraddhananda’s difference with Gandhi increased with the passage of time when he drew attention of Congress towards the harassment of Christian Chamars by police in environs of Delhi who had accepted Suddhi and returned back to Hinduism via Aryasamaj. In April 1919 he published a booklet of eighty pages entitled ‘jati ke dinon ko mat tyago’ (do not abandon the poor of our nation). The book’s first seventy pages dealt with the methods used by Christian missionaries in India. Nearly half of the book was taken up by translations from an article in the theosophist about the nefarious activities of Portuguese missionaries and the inquisition, followed by an indictment of protestant missionary work, in particular that of the Delhi Cambridge mission. Thus nearly ninety percent of the pamphlet was aimed at demonstrating Christian missionaries had always used unfair, immortal and underhand means to convert. The last ten pages dealt with constructive point.

Since the untouchables were becoming Christians for other than religious reasons, the way to prevent those happenings was by educating their children, by protecting them from the police, and by helping them to achieve social uplift. Since the orthodox would not take up that task, it had become a duty of the Aryas to be a crucial one because the greatest danger of the conversion of the untouchables to Christianity was that they became denationalized and supporters of the British Raj. Swami Shraddhananda wrote “if the seven crores of untouchables of India, exasperated by the attitude of the twice born, become Christian, then our orthodox leaders, supporters of independence, will not be able to do anything, except be very sorry.” (Jati ke dinon ko mat tyago, P-72).

In the 1920 Calcutta Congress session Swami Ji proposed three-point program with special section on the untouchables. But congress declared consideration of this inopportune.(shraddha 13 august,14,17 sept. 1920).

Swami Shraddhananda was surprised on hearing Maulana Shaukat Ali’s doings in Calcutta session in hearing of more than 50 persons, while the merits of non-violence were being discussed. Maulana said “Mahatma Gandhi is a shrewd bania. You do not understand his real object. By putting you under discipline, he is preparing you for guerrilla warfare. He is not such an out-an-out non-violencist as you all suppose” (INCO P-122).

Swami Ji forwarded his message to Gandhi’s secretary that his motives were being misrepresented by his trusted colleagues. The next year, in the 1921 Nagpur session Swami Ji again noticed the same pranks being played by the big Ali brothers. In Delhi the Aryasamaj had been working for the depressed classes, and Swami Shraddhananda tried to get the local congress to allow them access to the wells. But it was in vain.

on 17th August, 1921 Swami Shraddhananda reached Delhi and found that the question of removal of untouchability was becoming very acute. He called a few of chief Chaudharies and asked the full story. They gave the following story- “The secretary of the Delhi Congress Committee called the Chaudharies of the Chamars and requested them to give to the Congress as many as four-Anna paying members as they could. The reply of the elders was that unless their grievance as regards the taking of water from the public wells was removed, they could not induce their brethren to join the Congress. The secretary was a choleric man of hasty temper and said they wanted Swarajya at once but the grievance of the Chamars could wait and would be removed by and by. One of the young men got up and said – ‘our trouble from which we are suffering for centuries must wait, but the laddu of Swarajya must go into your mouth at once! We shall see how you obtain Swarajya immediately!!’”

Swami Shraddhananda wrote to Mahatma Gandhi after Nagpur session in Sept. 1921- “I wired from Lahore that I would apply for financial aid through the Delhi Provincial Congress Committee but on reaching the Delhi I found that the uplift of the depressed classes through the Congress was difficult. The Delhi and Agra Chamars simply demand that they be allowed to draw water from wells used by the Hindus and Mohammedans and that water be not served to them through bamboos and leaves. Even that appears impossible for the Congress Committee to accomplish. Not only this; a Muslim trader of Sadar went to the length of saying that even if Hindus allowed (these man) to draw water from common wells, the Muslims would forcibly restrain them from drawing water because they (the chamars) ate carrion….”

“At Nagpur you laid down that one of the conditions for obtaining Swarajya within 12 months was to give their rights to the depressed classes and without waiting for the accomplishment of their uplift, you have decreed that if there is a complete boycott of foreign cloth up till 30th September, Swarajya will be an accomplished fact on the 1st of October. The extension of the use of Swadeshi cloth is absolutely necessary but as long as six and half crores of our suppressed classes are taking refuge with the British bureaucracy so long will the extension of Swadeshi be impossible”. (INCO.P-134,135)

In his letter dated June 30th 1922, Swami Shraddhananda wrote to general secretary of all India Congress Committee that the following demands of the depressed classes ought to be complied with at once namely that –

1. They are allowed to sit on the same carpet with citizens of other classes

2. They get the right to draw water from common wells and

3. Their children get admission into national schools and colleges and are to mix freely with students drawn from the so-called higher castes.

Swami Shraddhananda went to the Lucknow A.I.C.C. meeting of June 1922 especially to push a plan of action for the removal of untouchability. His proposal to appoint a sub-committee on untouchability was accepted, but some parts of it were amended. The sum of two lakhs of rupees was first substituted for the original five lakhs proposed and then even that was watered down by substituting the phrase ‘as much as could be spared’. But misunderstandings kept cropping orally, but when he started preparatory work and asked for some money, he was informed that the working committee had appointed until a report had been received from the sub-committee. It was all a sorry mess, letters came and went, nothing was being done, and the swami resigned in disgust. His postscript to the whole story as follows- The subcommittee did no business in placing the annual report of the congress before its session at Gaya; the secretary simply remarked that no work could be done by the sub-committee as no substitute for Swami Sharddhananda could be found. (INCO.P-181) Swami Sharddhananda did not receive any support from the congress and Mahatma Gandhi for eradicating the sin of untouchability. Instead of that he received the message from Cocanada session of congress in which Maulana Mohammad Ali the president of that session proposed to divide the so-called untouchables in equal halves between Hindus and the Muslims. (INCO.p-188)

Swami Ji’s first tour to South India was between 27 April to 5th June visiting Bangalore, Cochin, Mangalore, Calicut and Madras. The main theme of his lecture was untouchability. In Poona he pleaded with the Hindus to abolish immediately the untouchability and raise the depressed classes to the status of Kshatriyas or protectors of the Hindu religion (leader, 5 may 1924). He presided Andhra untouchable’s conference at Bangalore and went on to observe Vaikom Satyagraha. He made it clear that he could not personally take part in the struggle as he was not a member of congress. He argued against Gandhi’s directive that the struggle should be kept local, and suggested that a deputation be sent to the Mahatma to see if he could at least allow the committee to receive outside help. If the congress gave up the struggle, he said, it should be continued independently. He offered help and money and even, in that case, to take up the struggle under the auspices of the Hindu sabha. (Leader -12 may 1924).