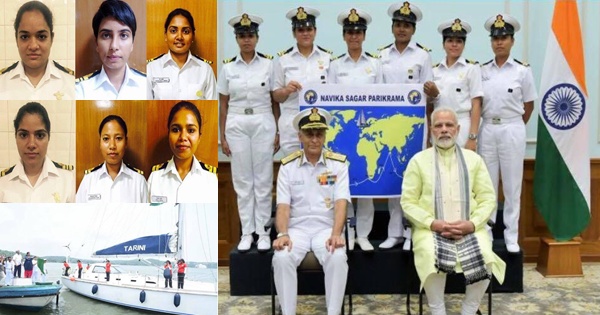 On 10th September 2017 afternoon at around 12.30 pm, six fearless Indian Navy women set sail into the Arabian Sea from Panjim, Goa commencing a first ever (only women crew) attempt to circle the globe. Defence Minister Nirmala Sitaraman proudly flagged off this courageous project which is called “Navika Sagar Parikrama”. Our brave Indian ladies set out in an indigenously built vessel named INSV Tarini.

Mrs Nirmala Sitaraman, while waving at the sailing vessel carrying these six brave Indian Navy women, termed this daunting voyage of a league of extraordinary ladies as “historical occasion”. She smiled proudly and said “This is not an occasion which can happen once in five years, once in ten years. This is a historic day for India. A historic day which will be marked in navigation history globally. Our women are going to stand out for doing something which most navies haven’t even thought of”.

She added “Just 8 days after my swearing in as Raksha Mantri, this (all women expedition) is not really something which can happen frequently. For me to come and to flag off an all-woman crew doing a circumnavigation of the globe is something I can’t describe in words and I am indeed honoured.”

The all-women Indian Naval crew members will complete their circumnavigation of the globe sailing through several Oceans by March 2018. They will accomplish this extraordinary globetrotting in five leg and shall have four maintenance stopovers at Fremantle (Australia), Lyteltton (New Zealand), Port Stanley (Falklands) & Cape Town (South Africa). The crew has been specially trained by another illustrious Indian Naval Officer, Commander Dilip Dhonde who circumnavigated the globe on a solo voyage in 2010 and completed his expedition in 276 days.

This extraordinary Indian Navy women team had a special meeting on the 16th August with Prime Minister Shri Narendra Modi who tweeted- “Today is a special day! 6 women officers of the Navy begin their journey of circumnavigating the globe on board INSV Tarini. The entire nation comes together in wishing the all-women team of Navika Sagar Parikrama the very best in their remarkable endeavour.”

Mr Modi also urged this team of valiant Indian Navy women to pen down their personal accounts and share it among young children. Our children definitely need to know how to venture into the unknown and claim victory over fear through these indomitable Indians. The project is considered essential towards promoting ocean sailing activities in the Navy and sending a message to the world about India’s women achievers.

It’s not easy to brace the deep sea. You need courage not to get run down by a storm and face it firmly. The radio may not work, the Sun may be harsh on you, the boat may flood sometime, it will be pitch dark during the night. There will be very little margin for error. Brave ladies you cannot fall sick, you may miss your near ones but nothing can stop you, until you reach your destination. You are doing it for your country ladies and we wish you all the best!! Bon Voyage Fearless ladies! This is Power of Shakti!!