‘Hindu Terror’ a Myth; How the Term was Invented: Insight by RVS Mani 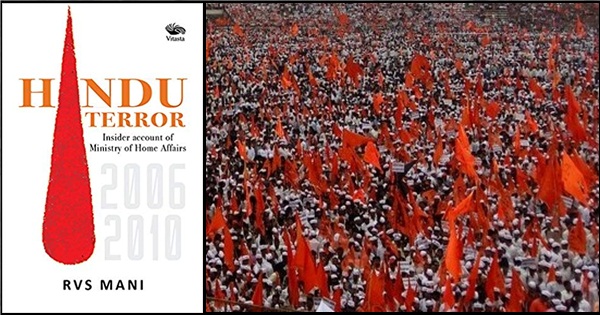 In my opinion, an Autobiography is the most difficult to write – particularly when the author is focusing on few years of his career and he has just retired from Govt service which poses major constraints on what can be written and to what extent certain details can be revealed.

The Myth of Hindu Terror – is a fair and square attempt to write about a phase of the life of the author where he performed his duties with great satisfaction of his superiors and yet had to go through lot of turbulence and suffering for standing up for right cause.

Mr. RVS Mani, a retired officer who has worked in various Departments and Ministries of Govt of India during his 30+ years of career, has penned this interesting book – The Myth of Hindu Terror. He was in Internal Security (IS) division of Ministry of Home Affairs.

While you keep reading the book – you will feel as if Mr. Mani is sitting in-front of you and narrating the details of events as they unfolded. That was sometime in 2005 and a new Govt had taken over in 2004.

In this book, RVS takes us through the events particularly from 2006 to 2010 where there were many terror attacks in India – right from the bombing at IISc Bangalore.

There are some startling disclosures which are extremely disturbing. You will have to read the book to know them.


While reading the book you will come across,

– Impeccable and exceptional intelligence gathering by resources of IB and MHA
– Timely notification from MHA to State Govts
– without exception- State Govts will sit on these notifications and not take any preventive action
– Invariably – terror attacks happen and blame game begins.

As RVS takes us through these events, he also explains in detail – how the UPA Govt, remote controlled by Sonia Gandhi and Home Ministry under P Chidambaram and then Sushil Kumar Shinde, played the deadly game of creating the narrative of HINDU TERROR. And Digvijay Singh was the mastermind behind this idea.

Such treachery by Govt of the day not only made normal Hindus feel guilty and ashamed, but gave leverage to Pakistan and helped that enemy nation to create a narrative that saffron terrorists are the one doing all attacks and Pakistan never supported terrorism.

You will be also shocked to know that

– Entire top brass of Min of Home Affairs were in Pakistan two days before 26/11 Mumbai attack.

– They were to return on 25th but their stay was extended in last minute and they were taken to Murrie a hill station that had very low telecom coverage and hence cutting of the top brass.

– Additional Secy Border Management – who was normally not part of Home Secretary Level Talks (HSLT) was also included and he was the one who convinced Home Secy to agree for one day extension.

– A Pak boat was spotted close Indian Nautical Border few days before 26/11 but no action was taken.

– CISF/CRPF commandos based in Mumbai could have been deployed to counter the terrorist attacks. But Home Ministry sat on that.

– NSG team was ready in Delhi Airport and Plane was ready to take off. But Home Minister, Shivraj Patil had given instruction that he would accompany but he went off to sleep and was not accessible. Hence Commando deployment was delayed by many hours.

And the worst conspiracy is – UPA Govt gave a list of wanted people in Pak to Pak Govt but 2 of them were already arrested in India. This made the whole exercise a joke and Pak used this to destroy the credibility of the dossier.

My take after reading his book is that UPA Govt deliberately wanted to support Pak to prove its claim that Pak is not supporter of terrorism and hence built the Hindu Terror Narrative.

Now comes the Ishrat Jahan case. He was asked to file an affidavit on the stand of MHA by the court and he went and filed. The affidavit was stating the facts and hence supporting the claims of all those officers suspended/arrested for Ishrat Jahan encounter.

This put him in the cross-hairs of powers running the country. How he suffered, how much torture he went through and how much he lost – you must read the book to know.

And he raises some genuine and shocking questions – which have not been answered.

RVS Mani is a proud Indian with traditional upbringing by Tamilian parents, son of an officer with impeccable values and culture, cricketer, ritvik, member of managing committee of a Vinayaka Temple in Sarojini Nagar, South Delhi and a trustworthy team mate for his superiors and a great friend to his buddies.

After reading the book, I really started believing that – THERE IS BHAGWAN – who has been really shielding our nation from such nefarious and poisonous politicians.

And we have a saying in Tamil translation of which is – “Dharma will be surrounded by deceit and treachery and utlimately Dharma will win.” 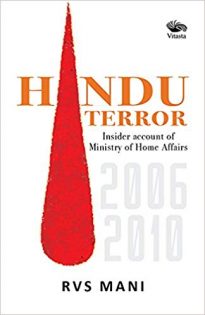 Ramesh N Vinayak is a solopreneur running a firm that manages and promotes personal brands. He is also a social activist, proud Hindu, staunch nationalist and social worker.