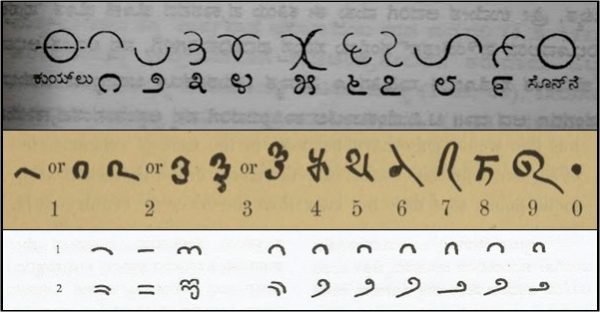 We now know the numbers we use are coined as “Hindu Arabic” numerals. Now it is accepted that, “0” and decimal system started in India (after lot of fight). But this is half truth. Nobody tells, how did the numbers really evolve? Why we write 0,1,2,3,4, 6, 9 in that way and not in some other forms. Syria had cuneiform, Egypt had so many symbols, in fact one symbol for each and every word. Even Chinese and Japanese languages have strange looking symbolic notation. But the number design looks simple (with very less strokes) and doesn’t get influenced from any of these popular symbols. What is the reason for this exclusivity and how did our ancestors invent them?

The History of present numbers can be deduced, if we see the way numbers are written in “Kananda language”. In Kannada we have one book called “Siribhoovalaya“. It is written by Kumudendu Muni. The beauty of this book is, it is written using only numbers. Yes, the language of the book is numbers and it is called “Ankha Kavya“, meaning “Numerical Poetry”. It is probably the only book in the world written this way.

Fig 2 shows, how the numbers evolved from Ashokan time (3rd BC) to present day (21st century) under various rulers ruling Karnataka. The symbols are extracted from epigraphic studies and published. So there is sufficient proof and background.

What is interesting is, if you carefully observe the ancient (or original) Kannada numerals, you can make out that, they are derived from moon. People observed moon and started to record. What started as counting and recording moon’s progress from no moon day to full moon day, became a counting system.

So, no moon day, became a full circle with a crossed line. The crossing of full moon became no moon (so natural). Padya (the first day after no-moon day) became one semi circle (just like the way it is visible in sky). Second day became 2 semi-circle lines written one above other, to indicate increased thickness. Similarly are 3, 4 etc. The way moon grew its thickness to become full circle, became a natural writing expression. Note, the 15th count became a full circle to indicate, the full moon. So, they established a counting pattern up to 15, which is hexadecimal system (as we know today).

Writing semicircle one above the other was tedious, so they started to invent symbols using the semicircle. This is how the larger numbers were replaced. Writing semicircle one above other can be still seen in Ashokan time for 1 to 3. Note, Ashoka used Pali and not Kannada. So, probably the Kannada numbers were incorporated in many languages by that time itself. Due to poor way of writing or for keeping secrecy, the numbers were altered during trans-migration. But still the original foot print can be seen even to this day. For example, see 4. 4 is squeezing of top 2 quadrants of circle.

The symbol became “t” in Ashokan Pali. The “t” has become today’s 4 (in modern world). You can still see the t part in 4. Kannada 3 is today’s “3” (in modern world). Look at 3,6,9. All use same symbol but with changed angles. Same is the case for 0,5,10 etc. So, the sequencing jumps were used to reduce symbols. Look at 0. It is 0 with a central line. The line divides the circle in to two. The first part became 1, the second part became 2. This is how, 1 and 2 are invented in Kannada. Even today, this is how they are written in Kannada. The reduced symbols are easy to remember and learn. The pattern helps in teaching and eliminating confusions. 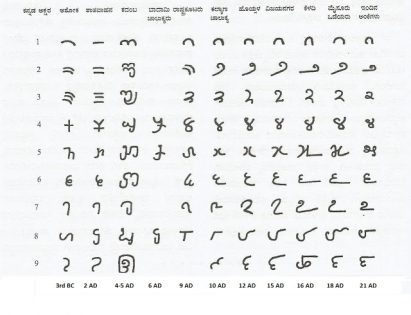 The Indian traders took the numbers to Arabia and it spread from all over. As recording things was laborious, and bulk of writing was numbers, simplicity of Kannada symbols attracted world attention and it was adopted immediately. It was just too economical to use the symbols for writers (it reduced their effort significantly). As the “copiers” did not know original meaning or how the symbols were invented, they did not maintain order while altering the symbols.

Originally numbers were hexadecimal. The full moon “0” was representing 15. “0” was called “Poorna Ankha“. Poorna means, “full” and “Ankha” means number. Full moon is still called “Poorna chandra” in Kannada. In olden days Rice/Barley/cotton and oil were main commodity items. Rice could be ferried in sacks and oil was ferried using pots. The sacks/pots were handled by manual laborers. It means, these sacks/pots should be handled by both men and women, young and old, etc of the population. So, an average size was derived. The big sacks and pots were used for transporting and storage. But smaller quantity was required for daily usage or for barter. The small and big sizes were invented for convenience. It so happened that, the ratio between small vessel to big vessel happened to be 1:10. I think, it got fixed, when they standardized the sack size/pot size. The users were reluctant to change the small vessel size and sack size was limited due to standardization.

Later they adopted numbers to record. When they adopted this, the hexadecimal had to be truncated to decimal system. The 10 became “Poorna Kumbha” meaning full Pot. In rural areas, if you observe the way, they measure traditionally, they count like this. They count up to 9 and say “Poorna Kumbha” for 10. They start the process again. The number of “Poorna Kumbhas” becomes the value to settle payment. So, “Poorna Ankha“, 0 was used for “Poorna Kumbha“. This is how full moon symbol, “0” got incorporated in “10”.

Also note, Bhakshali manuscript, the fragile document, zero does not yet feature as a number in its own right, but as a placeholder in a number system, just as the “0” in “101” indicates no tens. Bhakshali script features a problem to which the answer is zero, but here the answer is left blank. This clearly indicates, blank or absence of number was zero. And zero was kumbha or the place holder (like in 10, 20, 30 etc).

“0” as we know, did not represent the number “zero”, originally. Reference to “Shoonya” in Upanishads is quoted to prove Indians invented “zero”. This is “Half Truth”. It is true that, “shoonya (nothing)” and “anantha (infinite)” were invented in Vedas. Both shoonya and anantha were invented to describe god.

Ishopanishad gives popular shloka, “poornamada, poornamidam….” shanti mantra. It equates “Fullness” with “Shoonya“, to indicate everything comes out from creator and everything should finally merge with creator. It was an argument to propose – Merging with creator is the end truth, Life is an opportunity and one should use it to, meet the end objective in less cycles of birth and death. This is “philosophical”. The shloka links “fullness” with “shoonya“. Since “Poorna” was represented by “0”, somebody used it in writing, while interpreting this shloka/Upanishad/idea. Since counting was from 1 to “Poorna Kumbha” and the cycle was repeated, starting or end point becomes the same. So, “0” started to represent beginning in some cultures. This is how, symbol “0” became today’s zero.

Since the numbers are more or less used in original form only in Kannada, we can trace the full history of numbers. We can say that, probably numerals as we know today were invented in “Karnataka”. Due to controversy surrounding “Siribhoovalaya” and establishing a date for it, it is still not possible to establish the antiquity and claim the “due credit”. Since, no other written epigraphical proof of Kannada before Ashokan period is found, it is hard to give the required proof.