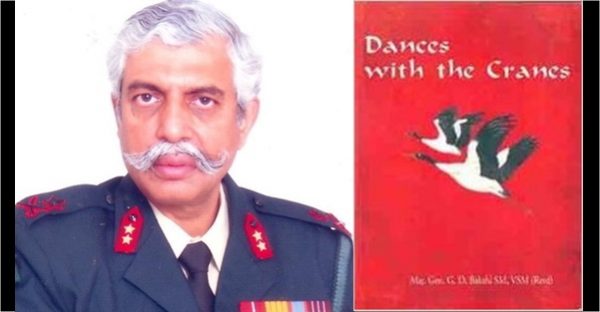 Dances with the Cranes, a collection of poems by Maj Gen (Dr) G D Bakshi, was shortlisted for the Rabindranath Tagore Literary Prize given by the Maitreya Foundation of USA. The shortlisted personalities were felicitated on 11 April 2018 at the India International Centre, Delhi.

The poems in Dances with the Cranes deal with the theme of reincarnation. The Black necked cranes who migrate each year into Ladakh, Bhutan and Arunachal Pradesh from Tibet and other SE Asian counties are used as a metaphor for the flight of the soul from body to body. Maj Gen GD Bakshi has used bird migration as a symbol for transmigration.

Maj Gen Bakshi wrote this collection of poems when he was fighting intense Counter Terrorist operations in the rugged mountains of Kishtwar. He had to see a lot of death and dying and this led him to pen these poems. Essentially they are poems of hope – for they talk of life beyond death.

Some of the poems in Dances with the Cranes are haunting and lyrical and celebrate the beauty of the majestic landscape of Bhutan- the Dragon kingdom where these birds come from every year. When they come and go each year they first circle the monastery in the Phobjika lake area as a tribute. Their liquid cries and dances keep us mesmerized and give us the peace of the sky come down to this earth.

Here is a poem from Dances with the Cranes,

the light and shade

the tapestry of time

in that deathless stream

on the river of time.

The River of time

Dances with the Cranes celebrate the magic and mystery of death and rebirth. The Black Necked Crane is the National Bird Bhutan. It is called Thrug-Thrug-Kam by the Druktas. It is deemed to be a good omen. It is a symbol of good fortune, fidelity and hope. Its hypnotic dance is a metaphor for the transmigration of the soul. Maj Gen GD Bakshi says, “If we can understand the cadence of its dance, we can solve for ourselves the riddles of our death and rebirth.” 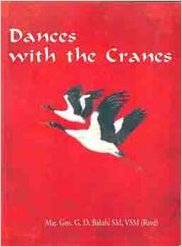 “Today, unfortunately these magnificent birds are facing extinction. In the years to come will these regal cranes die all together? Will they vanish without a trace? Will our children see them dance? Do the symbols of our hope and resurrection deserve to die? Today we desperately need to save these birds. In saving them, we will save ourselves and our good earth,” he says further.

Besides Dances with the Cranes, Maj Gen GD Bakshi has authored 35 books and over 150 papers. He is one of the most combat experienced officers of the Indian Army. He won the VSM while leading his battalion through fierce skirmishes on the LC in Kargil and later won the Sena Medal while leading CT operations in Kishtwar. He later commanded the reputed Romeo Force (Division) in CT operations in Rajouri & Punch. He had two tenures in the prestigious MO Directorate at New Delhi. He taught at the IMA Dehradun, Staff College Wellington and the prestigious National Defense College at New Delhi. A Phd in Strategic studies, he is a member of many prestigious think tanks. He appears regularly on national TV debates. Currently, he is Editor of Indian Military Review and Senior Security Advisor with the Reliance Industries Ltd.