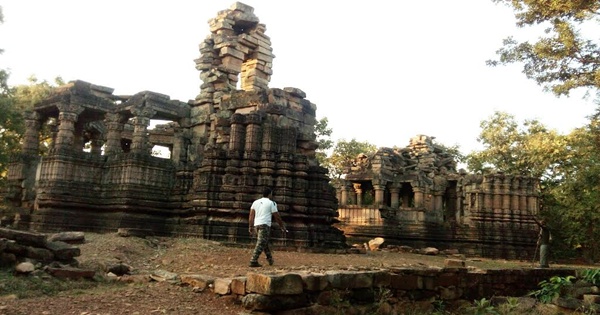 Ajaigarh! Our trip itinerary excluded this sleepy town from the list until we visited Pandav Fall and Caves within the premises of the Panna Wildlife Sanctuary. The guide there advised us to visit Ajaigarh Fort.

The drive by our Mahindra Thar was never hectic, as I and my husband Yogaditya Singh Rawal drove in turns. And the September sun wasn’t harsh on us, keeping our stamina in tact! Ghaziabad to Maihar, then to Khajuraho! 75 km from Khajuraho via Raneh Canyons and Pandav Fall and Caves; and we landed up at the base of Ajaigarh Fort. It was around 3 pm. 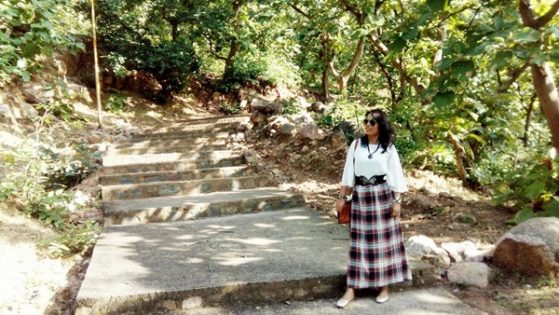 There were no people around. No sight of tourists was visible. A flight of steps upwards towards the hill, partially hidden by bushes, caught our attention. To reach the top, we had to climb the stairs.

Though my husband was all geared up to explore the fort at the hilltop, I was hesitant. The day before, we were in the holy town of Maihar where we climbed Trikuta Hill barefoot to seek the blessings of Maa Sharda. This second trek on the second day would extract the energy out of me! 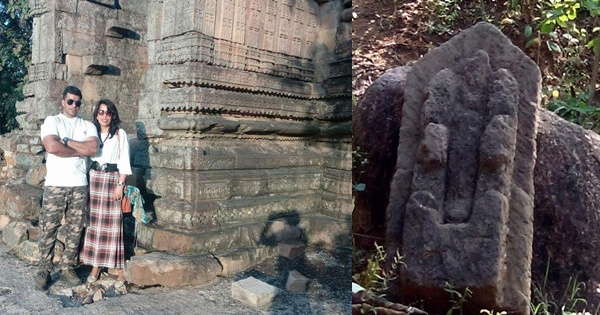 My husband was reluctant to leave me alone at the base. By then we saw four tourists climbing down the stairs. I asked them whether it was worth the climb. Their reply was a big YES.

It did not take us long to reach the top. The entrance was mesmerizing, though completely in ruins. Lord Ganesh welcomed us. A guard at the gate took out a register and asked us to enter our names and other details. My eyes explored the visitors’ list only to find 30-50 on an average per month. 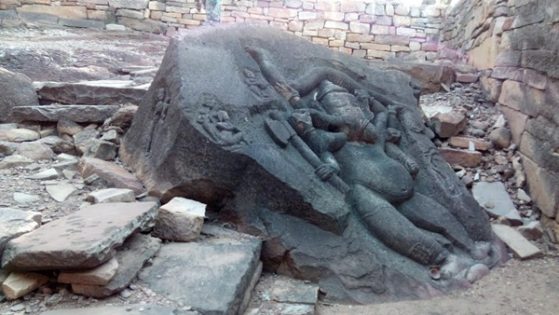 The Fort is completely in ruins. Except the boundary walls and gates, no structures stand tall. The guide told us that a group of temples in ruins, some two to three km away from there, was the key attraction. He showed us the way pointing his finger.

We asked him to guide us. As no more tourists were expected after us, he agreed to take us to the standing monuments. He took along a bhala, a long spear citing appearance of wild animals from pre-dusk throughout the entire night. 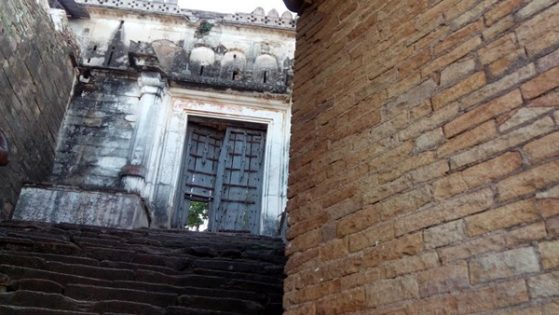 And our footsteps proceeded fast, following him. All the while, till we reached the other end through the sparse jungle, he narrated to us about the rulers of Ajaigarh.

The kingdom was founded in 1765 by a Bundela Rajput prince called Guman Singh, who was a descendant of Maharajadhiraj Chhatrasal. The Maharajadhiraj was the founder of Panna. He established his kingdom after defeating Mughal Emperor Aurangzeb.

The kings stayed at the foot of the hill-fortress. They built several temples, the carved sculptures and architecture of which bore resemblance to the Khajuraho temples. 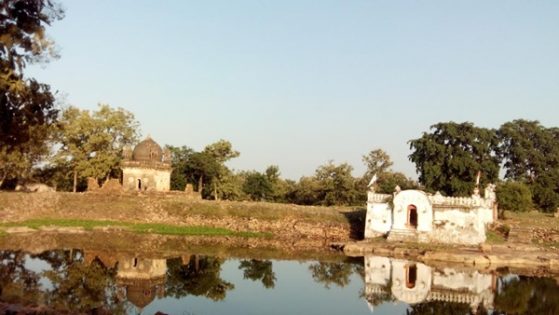 According to the guide, the town was often afflicted by malaria and famine. It was then that a tantrik arrived at the palace. He offered to perform some rituals after which the sufferings would subside. The then king agreed.

The tantrik performed a ritual for several days continuously invoking Lord Shiv and Goddess Shakti following which suffering subsided. A temple with a water body at the front was erected by the king for the tantrik. It was believed that wishes of all those who came to visit the tantrik got fulfilled. 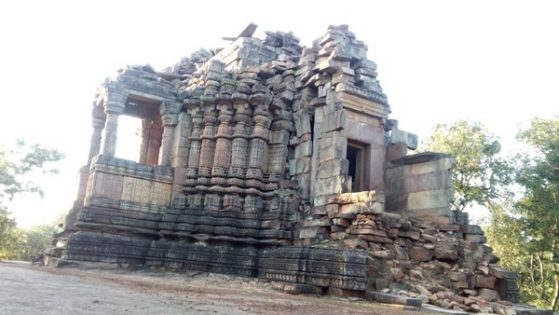 The tantrik breathed his last at the fort after a few years. According to the guide, the locals still have faith and they throng the temple with their wishes in mind. He asked me to make a wish, as we entered the temple. He said I had to come again to offer my prayers in the temple if my wish got fulfilled.

I made a wish. Maybe in the future I may visit Ajaigarh Fort once again if my wish gets fulfilled! 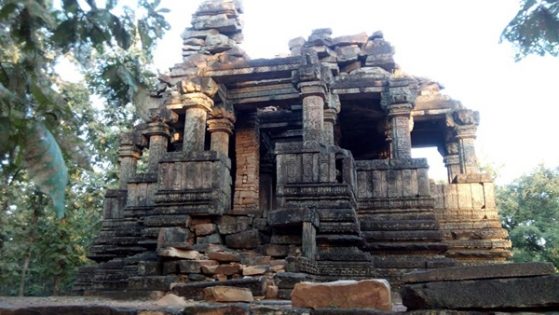 And we resumed our walk again with our guide guiding us ahead. Suddenly the sight of the temples came into view. It was just wow! Both of us felt elated. It was a gem of a place, a treasure house of heritage!

The tiredness that I felt few seconds ago vanished into thin air! We hurried our steps towards the temples. The guide said that worshiping in these temples had stopped long time ago. There were no idols. While few were kept in museums, few were stolen. 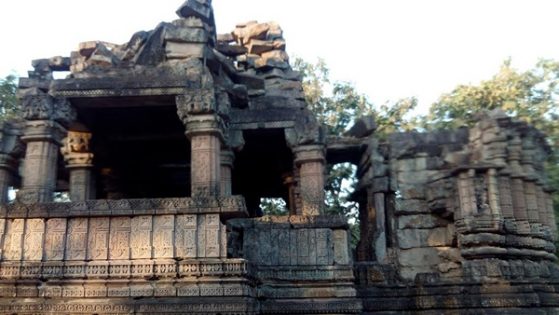 Dusk was approaching. And we wished the sun set late. But time is tide, waits for none! We explored the temples one by one in detail. The guide said the temples had the idols of Vishnu, Sun God, Lord Shiv, and Shakti.

Though we had landed up in Khajuraho, we had not visited the temples there yet. Hence we could not compare the temples of Ajaigarh Fort. The guide said the architecture and design of the temples resembled to that of Khajuraho. 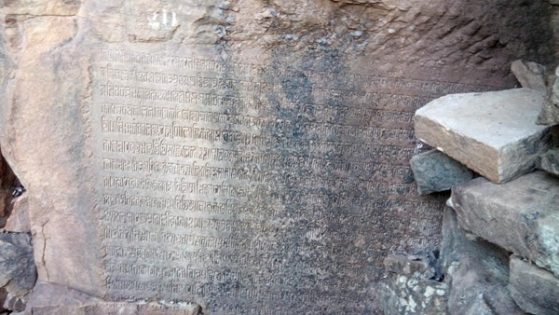 Lack of maintenance and effects of time and weather have worsened the condition of the temples of Ajaigarh Fort. An inscription drew our attention. We could not understand the script. And the guide was ignorant about it too.

The guide asked us to hurry up. He said it would take us another half an hour to come back exploring to the same spot at the entrance gate from where, we the trio, started. 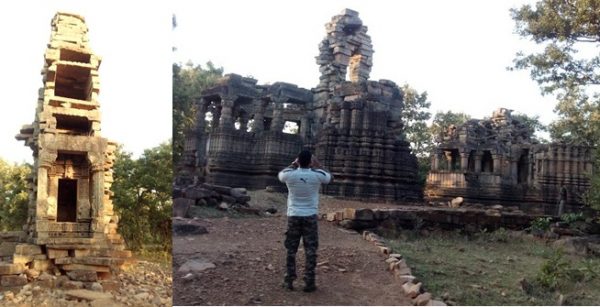 Had I not climbed the hill, I would have regretted! From there we followed the guide’s footsteps further towards the left from the site of the temples.

And we reached another gate. From there the town below was partially visible. Vast green vegetation below soothed our eyes. The guide said that descendants of the king live in a palace located few km away from the fort. 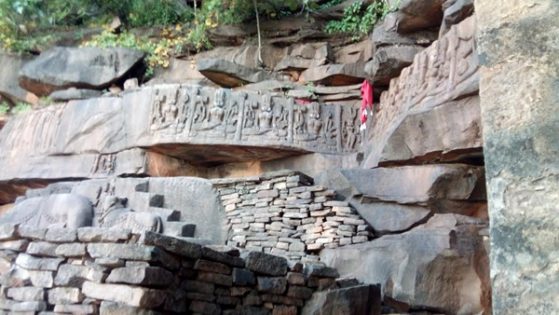 At the exterior entrance of the gate of Ajaigarh Fort, carvings of the nine forms of Goddess Durga caught our attention. The guide said tantriks used to regularly visit this site to offer their prayers to the goddesses. We bowed our heads in reverence.

By then, the sun was about to set. The guide asked us to hurry back. By the time we reached back to the main gate, we covered a distance of almost 5 km!

Descending from Ajaigarh Fort was fast!

Click to read my travelogues on Khajuraho, Pandav Fall and Caves, Maihar, Jhansi, and Om Banna.