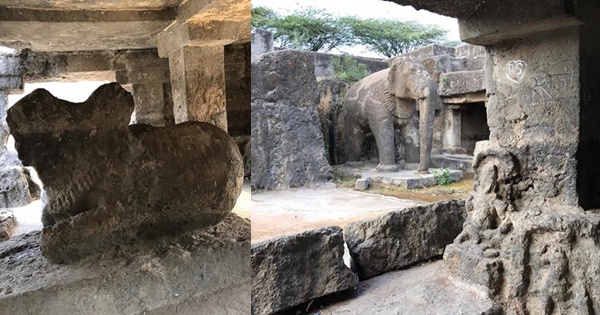 “King Udayaditya of Paramara dynasty from Malwa and Vikramaditya VI of Kalyani Chalukya dynasty from Karnataka were friends. The two valiant kings of extremely powerful kingdoms came together and rejected the dynastic feud during their rein in the 11th century.”

King Udayaditya and King Vikramaditya VI respected each other by supporting their kingdoms and encouraging religion and culture. Their friendship began to grow when Udayaditya and Vikramaditya fought together and defeated King Lakshmikarna of Kalachuri dynasty around 1055 CE.

To corroborate their friendship the two Kings constructed many temples around their territorial boundaries. Ambejogai in Maharashtra must be one of such cultural and religious centres of the two formidable Hindu kingdom from Central and South India during the 11th Century. 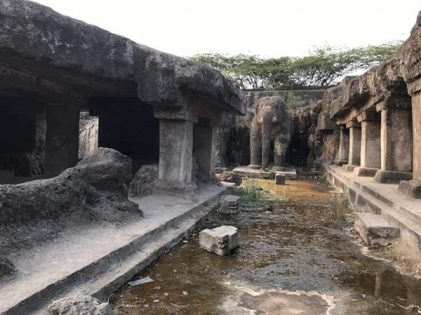 While the recently excavated Sakleshwar temple (completely damaged) was supposedly built by Vikramaditya VI, the magnificent Shivleni cave (Severely damaged) was carved out during the rein of King Udayaditya. As if in mutual admiration, both the structures once upon a time stood elegantly within a distance of few kilometres at Ambejogai. One can easily visualise the extent of cultural and religious confluence at this place during the 11th century!!

Shivleni Cave is not a cave in true sense. This is a basalt rock cut structure which is a combination of top down and inside out carving. The primary concept is similar to Kailash temple of Ellora albeit of much lower scale. In all likelihood Shivleni cave of Ambejogai was constructed in adulation to the Rashtrakuta marvel of Ellora. 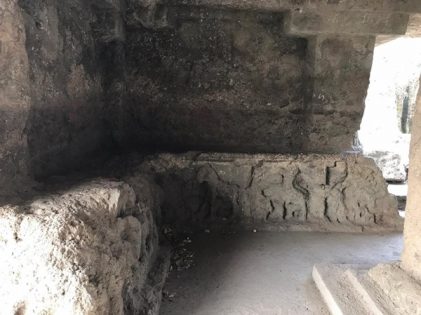 The Shivleni temple of premises at Ambejogai greet with an aerial view of the rock cut structure, since the entire monument is carved out from top and stands below. There is a squarish temple yard of 8.36 sq m with a large mandap at the centre. The mandap has been elegantly carved out with robust pillars, closed walls and an impressive canopy.

Four huge elephants stand at the corners of this temple yard. Part of the many pillared cave is also visible from the top. A flight of stone stairs go down through a narrow opening cut out straight through the basalt rock to enter the Shivneli cave temple which is also called Hattikhana locally (Presumably for the elephants). 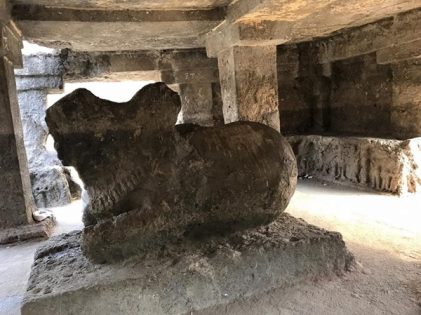 A mixed feeling of ancientness and sadness descends when you realise that the site has been ravaged by humans as well as forces of nature and completely lacked maintenance for several centuries. Three of these extraordinary elephant sculptures are gravely damaged, except a gorgeous looking one which stands unblemished on the left side of the main temple. 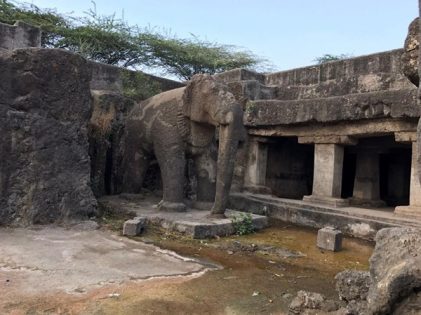 The glorious mandap has an entrance with two frontal walls, possibly had carvings all along the outer walls in the past but completely lacerated now. A huge Nandi sits inside the mandap looking at the cave in front. Numerous vandalised carvings from Puranas are visible on the inner walls and it’s footing along the four pillars of the Nandi mandap. The Nandi itself is significantly damaged.

The destructions could have been carried out by the same fanatics who destroyed many Hindu temples in Ambejogai including Sakleshwar temple nearby. The destroyer in the process, intentionally or unintentionally succeeded in erasing the reminiscence of a friendship between two powerful kings of the past – Udayaditya and Vikramaditya VI. 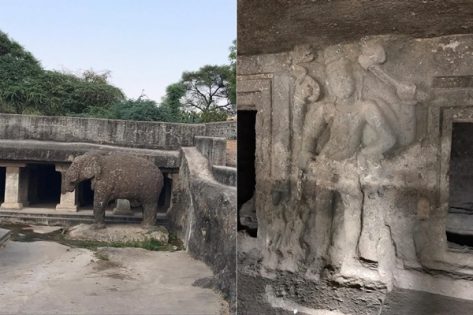 As you enter the cave temple of Shivleni, you will be bewildered by sheer display of pillars carved out deep into the rock to give a cave like appearance. There are 32 solid pillars carved out with impeccable engineering precision.

Move deeper inside the cave across the countless identical columns and you will find many squarish rooms with exquisitely carved Gods and Goddess on the outer walls. Most of them are critically damaged now. One such large carving looked like a Dwarpalaka. “This carving is of Lord Shiva (Bhairav) with four arms very similar to Ellora carvings” exclaimed Prasad, our local friend, completely shunning my view on dwarpalaka. 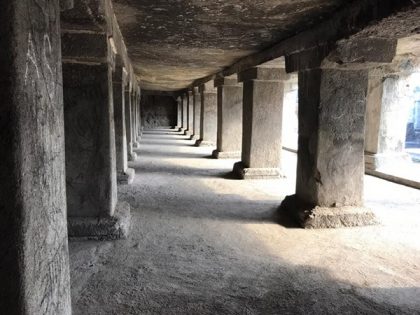 The name Shivleni must be on this extraordinary image of Lord Shiva. There is no doubt that this was a Shiva temple as Nandi sits outside under the large mandap. I believe there must have been a Shiv Linga inside the central room, which has disappeared without a trace or completely destroyed!

A barely recognisable Lord Ganesha is carved on the other side of the wall. The various rooms could have been meant for praying or each dedicated to one particular God of Hindu pantheon with sculptures or Vigrahas inside. What was the actual purpose of this multi pillared cave temple is still a mystery… 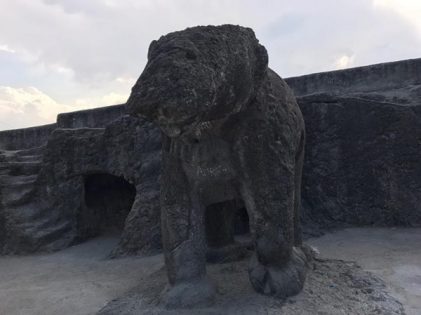 One ignorant maintenance contractor engaged by Archaeological Society of India has cemented everything in this temple. The pillars, walls, sculptures, carvings, floors are all covered under a layer of cement thereby concealing the original basalt rock. King Udaditya’s soul must have grieved looking at this callous maintenance job!!

It’s sad to find temples and monuments almost sealed in a time capsule, as if lost, waiting to get back their old spirit. We hardly know anything about them, that time period, people, social life, culture, scriptures, rituals….They are time ravaged, and are in deep hibernation!! 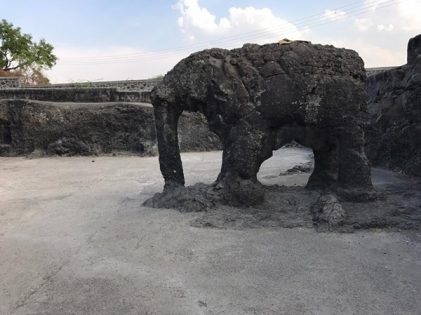 The spirit of these temples can come back only when they are frequented by visitors and admirers. Visit Shivleni caves temple of Ambejogai to help revive this sleeping temple’s spirit and rekindle the old friendship of two ancient Kings – Udayaditya and Vikramaditya VI. 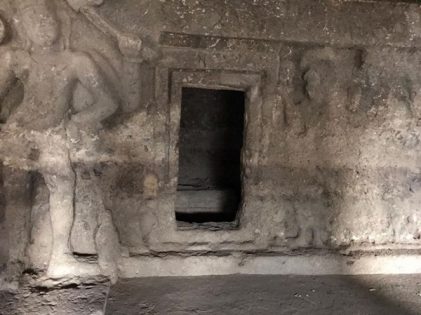