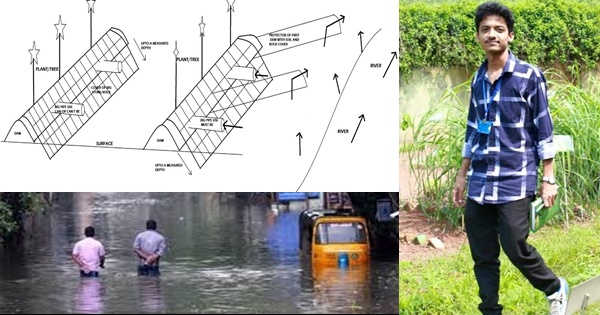 Come the rainy season and news about flood affecting lakhs of lives across the country hit the headlines throughout the season. Assam, Manipur, Bihar, and Uttarakhand are the worst affected every year. The region near the Ganges-Brahmaputra-Meghna basin, which carries an average of 60% of the total river flow of India, get washed away every year! Irregularities of the monsoon add to the dismay. And with climate change, Mother Nature seems unpredictable. She exhibits her fury with overflowing waters even in places like Rajasthan, cities like Chennai, disrupting everyday life for days together.

Think about the government spending in several digit crores every year on flood affected areas! Isn’t there any sustainable solution to control flood? This teenager from Assam, Dhrubajyoti Kakati, has come up with an innovative solution to control floods – an effective embankment system that can act as alternatives to earthen dykes along rivers and their tributaries. His idea hasn’t been implemented yet. He has been continuously involved in research to add more power to his design so that it effectively helps in controlling flood. The government of India should consider his design and finance his further research. Spread the word until his idea reaches the Prime Minister!

The mode of operation of this special system of embankment shall be as follows:

1. There shall be two embankments both of which should be situated at a certain distance from each other.

3. In the second one, the use of pipes shall depend on the current of water of the river.

4. Both the embankments shall be embedded with layers of gravel up to a certain depth in order to prevent erosion.

5. There should be tree plantations in the embankments.

6. Small structures made out of soil and gravel shall act as barrier, thereby protecting the two embankments from erosion. Also these small structures shall deviate the water towards the river again.

Dhrubajyoti Kakati, a teenage innovator and scientist, has well exploited ideas and technology to everyone’s advantage! While youngsters of his age are more inclined towards teenage activities and nearly indecisive about what they shall do in their future, he has pioneered seven innovations! Ideating and experimenting since his childhood, he pioneered concepts, directed towards empowering the physically challenged, small farmers, and the common people at large.

Besides being an innovator, 20 year old Dhrubajyoti Kakati is the founder of Haritkona – a bimonthly popular science newspaper, Haritkona TV (first Assamese science YouTube channel), Idea Study and Designing Centre, and KrixomNET, an agricultural startup. He has been a state level debater, winning prizes in state and district level competitions. He has been featured in national Zee Q Channel in a show called Teenovation. He was selected for World Youth Conference held in 2016 in Delhi. His innovations have been featured in local and national newspapers, regional and national TV channels including Pratidin Times, News Nation, Zee Q, and more.

His embankment system design for controlling flood has been featured in The Times of India newspaper. Currently, he is involved in creating two devices that will be helpful for flood affected victims in their everyday lives.