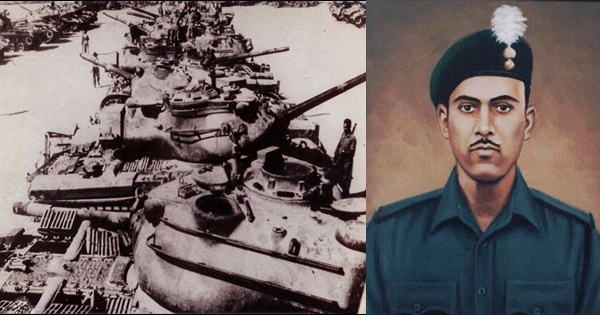 Abdul Hamid! He is valor and courage aggressively personified. Hearing about his feat, you will not only experience goose bumps but also feel your patriotic spirit coming alive. He is an inspiration for all soldiers. He is the epitome of sacrifice. He died defending our country in the battle of Asal Uttar during the Indo-Pak war of 1965. It is due to his extraordinary courage and his single-handed role in the destruction of 6 Pakistani tanks that the Indian Army got a crucial edge during the war. No wonder, Abdul Hamid is one of India’s greatest military heroes.

He was promoted to Company Quartermaster Havildar in the 4th Battalion of the Grenadiers infantry regiment of the Indian Army before the Indo-Pak War. He had already served for five years in the anti-tank section. He was deemed the best 106 mm recoilless rifle shot in the battalion.

Do you know Abdul Hamid also fought in the Sino-Indian War of 1962? The battalion he belonged to was then part of the 7th Infantry Brigade. He, along with his fellow soldiers, commanded by Brigadier John Dalvi, bravely participated in the battle of Namka Chu against the Chinese soldiers. During the war, the battalion was cut off from the rest of the Indian Army and was surrounded by enemy forces. Yet they made a fighting breakaway into Bhutan by foot and proceeded towards Misamari in Assam.

During the Indo-Pak War of 1965, Pakistani forces advanced up to the Khem Kharan sector in Punjab with tanks. The Grenadiers infantry, as per their defence plan, divided into groups and positioned themselves between Asal Uttar and Chima villages on all sides. They had to change positions when the enemy advanced inwards. Pakistani forces repeatedly attacked the 4th Grenadiers position. On 8th September, Abdul Hamid, posted at the 4th Grenadiers position, destroyed two Patton tanks of the enemy.

It was September 10, 1965. Abdul Hamid was allotted the responsibility of holding the Pakistani forces at Asal Uttar. Early in the morning intense artillery bombardment by the enemy at the 4th Grenadier position did not draw any response. And then at 8 am, the enemy, supported by Patton tanks, attacked the position. But they could not locate the battalion’s defences. In an hour’s time, they penetrated the forward company positions with their tanks.

They were about to reach the battalion defences when Abdul Hamid moved out to a flank with his gun mounted on a jeep. And he fired at the enemy tanks. The enemy shelled tank fire and gun shots at him. Badly wounded, he continued firing and moving forward knocking out three Patton tanks one after another. He was about to knock out the fourth tank when fire from it killed him.

This extraordinarily courageous action of Abdul Hamid inspired his comrades to put up a gallant fight against the Pakistani forces. They beat back the enemy’s heavy tank assault.

Abdul Hamid is a legend. He did not think about his personal safety or his life. He bravely fought till his last breath for Mother India.

Born on 1 July 1933 at Dhamupur village in Ghazipur, Uttar Pradesh, Abdul Hamid was one of six siblings born to Sakina Begum and Mohammad Usman. During his childhood, he helped his father, a tailor, to stitch clothes. He joined the Indian Army from Varanasi at the age of 20.

My India My Glory salutes Abdul Hamid and all bravehearts of Mother India. Jai Hind!