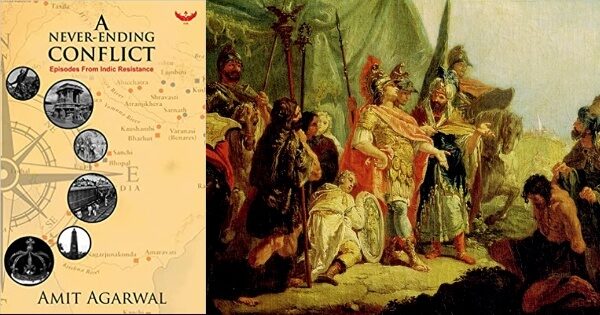 A Never Ending Conflict: Episodes from Indic Resistance is the second book by author Amit Agarwal which I have read. His first book, Swift Horses Sharp Swords had an entirely new perspective on history with a new format. The book was full of maps, tables, pictures, and illustrations; it was a breeze reading through it. I was a little circumspect when the author sent me his new book, ‘A Never Ending Conflict’ about whether he could keep up the promise. But I was proved to be wrong as I found there is a quantum jump in storytelling.

His latest book A Never Ending Conflict: Episodes from Indic Resistance is a compilation of five nearly forgotten stories. This collection presents a multifaceted narrative of Bharat’s history from 326 BCE, beginning with Alexander and finishing in the present, leaving several lessons to ponder. The delightful feature is that he has written it from an Indic perspective, quite a refreshing change from the usual leftist fare.

Every piece of history starts from a Puranic tale and culminates in the present times. A few things were new to me. I did not know that Hampi was the place where half of Ramayana happened. Here, Bhagwan Ram met Hanuman, Sugriva and Bali, and the whole strategy to fight Ravana was chalked out here. The place was bubbling with energy, leading to Vijayanagar’s founders Harihar and Bukka, choosing the place as their capital. Another exciting piece unknown to me was that Kohinoor was originally the Suryadev’s stone which was gifted to Krishna’s cousin. The author could build an engrossing story around how the stone proved to be a curse to everyone, especially males, who possessed it. Even today, queen Elizabeth is scared to wear it.

A similar narrative has been built in Lachit’s story, where the presiding goddess of Assam, Kamakhaya, features twice in the story. A little anecdote about her has been interspersed wherein the readers have been informed about her menstruating period, quite a uniqueness of Hindu dharma. It is said that the waters of Brahmaputra become red during those times. Alexander’s interaction with sadhus projects our spiritual prowess and goes on to tell us that the invader was no great person. There is a short story about the Eram massacre, a replica of Jallianwala Bagh, which happened in Orissa in the 1940s. The peculiar thing was that there was no General Dyer here and our own Hindu brother ordered the shooting, killing scores of people.

However, the Khilafat story takes the cake, and it is this story in which the author comes into his element. Hindu-Muslim conflict is his forte and he had come out all his guns blaring. He showed how conditions in the early 20th century still exist today with no chance of ending this never-ending conflict.

Unlike other history books, A Never Ending Conflict: Episodes from Indic Resistance is not Delhi-centric and covers the whole stage of Bharatvarsha. Every region is covered from North to South and from extreme west to Assam. In two of the stories, even contemporary world affairs have been incorporated. Kohinoor travelled to Afghanistan, Persia and then Britain. How these kingdoms tried to steal and rob the Hindu gem tells a lot about our ancient glory, medieval atrophy and modern resignedness. Khilafat’s chapter takes one to the distant Turkey, which was on the cusp of a revolution wherein it became a democratic republic, an unheard phenomenon in the Islamic world. The reader also learns about Russia’s anxiety due to its peculiar geography, which continues to deny its access to warm seas. This was the main reason for its attacking Turkey and Afghanistan in modern times to get access to the Mediterranean and Arabian Seas.

The author seems to be fond of battlefield formation, strategy and tactics as he explains them gleefully. He goes on to show that any opponent, no matter how strong or barbaric, can be defeated with the correct strategy. Ahoms played to their strengths and forced Mughals to fight on the marshy lands and rivers where their famed cavalry could not be deployed.

All in all, A Never Ending Conflict: Episodes from Indic Resistance is a saga about the Hindu-Muslim conflict wherein the latter always has the upper hand. They have been able to loot, maim and kill Hindus for the past 1300 years. The Hindus never let up their resistance and that’s why we are the only polytheistic ancient civilization to survive amid the incessant onslaught. The rest of all the civilizations bit the dust, be it Egyptian, Greek, Roman, Inca and Mayan, to name a few. The author has pointed out that in the past two millennia, 46 mighty civilizations were made to vanish at the hands of the two Abrahamic religions.

Post-independence, how our secular outlook destroyed the generations and made them ashamed of their own culture and traditions are delineated clearly. Everything about Hindus was branded superstitious, barbaric and archaic. Invaders of every hue were glorified and there is a whole industry for sustaining this narrative. The money flows from Islamic, Christian and communist countries, particularly China, to disrupt and dismember the country. Due to the debilitating secularism, we even squandered the spoils of the war in 1971. 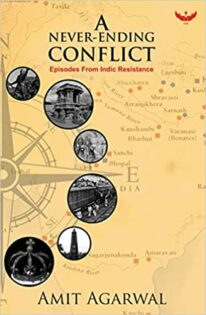 Another feature that I liked was the critical analysis of the prevailing ecosystem. The author doesn’t mince the words even while criticising Hindu weaknesses. It is essential to learn from past mistakes; then, only one can desist from repeating them.

The author, an IIT product, spins authentic, reliable historical tales which hook the readers till the end. They can relate to, appreciate and imbibe the invaluable history lessons from the book and implement them if we are intent on saving our precious civilization. The author is part of a new impatient generation of writers keen to change the way history has been written in the past. Along with the course correction in history writing, they want to steer India to reclaim its ancient glory.

A Never Ending Conflict: Episodes from Indic Resistance employs easy language to cater to a young audience, and I feel he might be successful in hooking them up to his book. It has the potential to make Gen-X proud of its roots. History took a surprising nasty turn in many places, and I have to look at references to whether it was correct. As it turned out, the narrative was indeed true. The references run for 20 odd pages and show the correctness of the history dished out in the book.

The book has certain weaknesses too. The first is the book’s thickness, for no book should be more than 200-250 pages. The author must understand that people’s attention span is quite low after the advent of social media. Editing could have been crisper as the story drags at a few places.

A reputed publisher Garuda Prakashan has published it, and if it is marketed well, it has the requisite potential to do well in the market. In the end, history has to be imbibed and implemented, only then any fruitful outcome will happen in the future.

A Never-ending conflict and Swift Horses Sharp Swords, in both Hindi and English, are available on Amazon and Flipkart.

The above is a review on A Never Ending Conflict: Episodes from Indic Resistance by Dr. RC Mishra, Vice Chancellor of Mahakaushal University, Jabalpur.

Right image in the featured photograph is sourced from Wikimedia.