Should Indian History be Retold? The Simba Connection 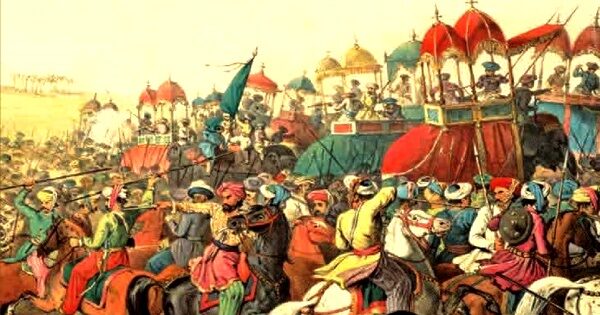 ‘The Lion King’ has exited the theatres more than a couple of years ago, but the story of Simba lingers on. This Walt Disney Pictures production refuses to desist the soul and mind. Does it have any relevance in the context of our nation, our culture, our heritage, our past, our history?

The movie opens with the birth of a cub, Simba, to The Lion King and Queen-namely, Mustafa and Sarabi. The newborn comes to a warm welcome from the animal kingdom over the Pride Lands of Africa. The birth of the heir to the kingdom distresses Scar- the younger brother of King Mustafa- who has his eyes set on the throne. He conjures a trap to eliminate both Mustafa and Simba which would enable him to be the Lion king. The greedy Scar partially succeeds in his plans in killing Mustafa and then convinces the young, unsuspecting Simba into believing that it was his (Simba’s) cowardice, irresponsibility and naivety which resulted in his father’s death.

A guilt-ridden Simba thus agrees to his uncle Scar’s desire to flee the land of his own and disappear to a far-off place where his ‘shameful’ past would be behind him. Simba, fortunate enough to survive one more attempt on his life, finds solace in his new acquaintances in a distant land, happily forgetting his past of which he was not proud. A life with no worries and care – ‘Hakuna Matata’ became Simba’s principle. However, he was not living the life that was his own -as the Lord of the Jungle.

In a pivotal moment of the movie in the second half, Simba is made aware of his greedy uncle’s designs, how Simba was worked upon to feel guilty, how gullible he had been to believe his uncle, and how it was his uncle who was responsible for his father’s death and then reminded emphatically:
“You are a Lion, Simba, and you have to regain your kingdom!”

With his ‘History’ sorted now, Simba roars back to life and goes on to regain his kingdom! What applies to Simba or any individual, also holds for a community or nation. Unless we can look back into our past with pride, we cannot claim our present, and consequently, our future is destined to be bleaker, and not the bright one of our dreams.

A nation which was under colonial rule for a significant period in history, a nation which had been attacked by several invaders with the intention of plunder and loot, a nation whose plight and concerns had been conveniently ignored by the world community- might often look back to the past with suspect and a semblance of shame. Had we been vulnerable throughout? Had we not shown resilience and courage when it was due? Did we not possess enough love for our motherland to sacrifice our life for the sake of it?

Questions abound, and pages in History should clear the air. But do they? If we peek long back enough, the archaeological findings unequivocally prove that semblance of one of the oldest human civilizations could be traced in this part of the world.

We were one of the earliest to perceive that the human species can live as a society where every stratum of society has a role to play in peaceful coexistence. Cannot we claim to have taught the world the way to harmonious living?

Our land has welcomed the persecuted lot from all over the world irrespective of caste, religion, or creed, and ensured their smooth transition into the mainstream society. We have been receptive to their beliefs and faiths- a fact lucidly enunciated by Swami Vivekananda in his speech in the World’s Parliament of Religion in Chicago on the 11th of September 1893.

Do the pages of our History project us as benevolent, kind and a strong nation which lent support to the needed whenever the situation demanded? Rather, our pages in the school history are full of details glorifying the invaders. Their taste for good life, music and other pleasurable, is celebrated; but the turmoil and plunder they inflicted on the indigenous populace are blatantly overlooked. An invader ruler is fondly remembered for the ‘Monument of Love’ that was built in Agra for one of his ‘many’ wives; but the architect, the engineers and even the labourers -who were presumably the natives- and who sweated day and night with their craft and energy to build up the architectural marvel, are but lost in the pages of history. The invaders were projected to have been the ‘giver’ whereas they were ‘snatchers’- snatching our land, trying to snatch our identity, and eroding the edifice of our culture. Most conspicuously there was a conscious attempt to ignore the indigenous ruler who successfully fought the invaders and dismantled them.

Chhatrapati Shivaji Maharaj used the Guerrilla warfare technique to the fore to fight the Mughals from invading the Maratha kingdom. Veer Lachit Borphukan, the Ahom commander, kept the Mughals at bay from conquering the north-eastern part of our land. Maharana Pratap fought with valour and lived a life of dignity. Rani Laxmi Bai died on the battlefield fighting on her horseback defending her kingdom from colonial rule.

Our brave Rajput Queens from Chittorgarh preferred to jump on fire rather than face dishonour from the invading enemy. There are many a name that could be mentioned here, but all of them did not find- or could not find a proper place- in our pages of History. Our land had attracted attention worldwide because of its rich natural resources. The sons and daughters of this soil have been proving their worth: Brahmagupta and Aryabhata made an invaluable contribution in the mathematical world, Ramanujan discovered the infinite series, Jagadish Chandra Bose made the world known that plant has life, and many more names could be cited here; our epics Mahabharata, Ramayana and Gita serve as a beacon light to all human souls. Our spiritual guides -Swami Vivekananda, Gautam Buddha, Ramakrishna Parmahansa, Adi Shankaracharya, to mention only a few- received worldwide followers for teaching ways to lead a peaceful life. With so much contribution in the sphere of Science, Literature and Spirituality, could we not hold our head high in pride?

Our land has been the land of sacrifice since time immemorial. A land which is the mother to brave souls – who had not dithered in their mission to protect the sovereignty and culture of this nation. The stories of valour and resilience are not in short supply. Yes, we had a few ‘black sheep’, who, for their selfish motives, had (and unfortunately even are!) playing into the hands of the foreign power and doing injustice to the motherland.

Our brave soldiers sacrificed their lives during the First and second world wars, fighting for their colonial masters, and contributing to the victory. But are there any pages in the history depicting the bravery of our foot-soldiers? The colonial leaders, however, got recognition as world leaders.

Our Freedom fighters Subhas Chandra Bose, Lala Lajpat Rai, Bhagat Singh, Chandrashekhar Azad, Mangal Pandey, Khudiram Bose, Maniram Dewan – the list is too extensive to be mentioned here – sacrificed their lives for the motherland. But the world history demeans our freedom struggle with the blot of partition. The partition was sad indeed, but all the blood and sweat which accompanied the freedom struggle seemed to have been erased by the stigma of partition.

Nalanda and Taxila were the epitome of higher education but were destroyed by the invaders- all the treasures confined in the innumerable books turned to ashes. So were various places of worship and places of gatherings that would hold the essence of the society. They just did not want to plunder us, snatch away our independence and dignity, but also destroy the very essence of our being. And then they tried to promote their own culture and tried to make us believe that we never had our own. The books of history were manipulated. History was then written glorifying the aggressors and dwarfing the attacked. And unfortunately, much has not changed yet!

Otherwise, how did we manage to keep our uniqueness and identity despite long under colonial rule and suffering innumerable invaders attacks?

The narrative was set to make us look weak and vulnerable. There seem to be vested interests who would love to see the same depiction continue. We need to have that ‘moment of realization’ about the past which Simba had in the movie “The Lion King”, we need to have our Simba moment. We need to realize the ‘Lion’ within us. And so, we need to retell our History: unadulterated and unprejudiced.

Featured image courtesy: From the cover illustration of the book India’s Historic Battles : From Alexander the Great to Kargil by Kaushik Roy.

Saurabh Paul contributed stories and poems in four editions of 'Chicken Soup for the Indian Souls' and author of 'Self Acceptance - A Handbook'. He writes for different portals.