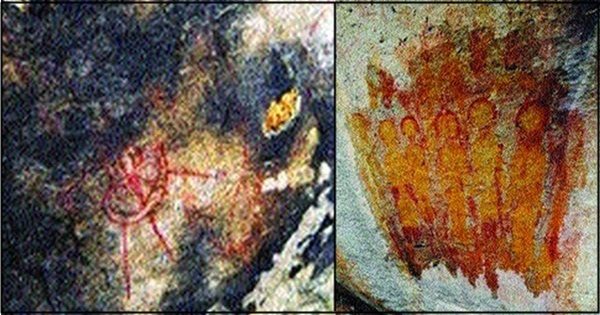 Ancient Indians manufactured different types of vimanas (airplanes), which find mention in several ancient Hindu scriptures including the epic Ramayana. Rigveda finds mention of mechanical birds; this description gives us an idea about the shape of the vimana used during Rigvedic period. Vaimanika Shastra by Maharishi Bharadwaj has a detailed account of the various vimanas of ancient India including the mechanism and technology used. NASA undertook an experiment of construction of mercury vortex engines, very similar to what was written in the Vaimanika Shastra.

But a majority of scholars, researchers disagree to the existence of vimanas in ancient India despite the facts described in the scriptures including the Vaimanika Shastra. What do the findings in the caves of Chandeli and Gotitola in Charama in Kanker district of Bastar region of Chhattisgarh prove? Did vimanas exist in ancient India? Were landing of UFOs from outer space a common phenomenon some 10000 years ago? Did ancient Indians connect with aliens or extra-terrestrials? 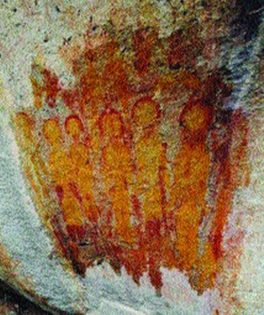 Archaeologists discovered stunning paintings of UFO and aliens in the caves of Bastar, located about 130 km from Raipur. These paintings, done in natural colours, have survived the tides of time and changing weather conditions – a proof that ancient Indians were experts in dye making. The vehicle that resembles a UFO type of aircraft is seen with three stands with fan-like antenna.  The aliens or extra-terrestrials depicted in the paintings look like strange beings with no clear features and with no nose or mouth. They are seen holding weapon-like objects.

To quote India TV News, “These cave painting depict what can only be described as large, extra-terrestrial humanoid beings descending from the sky in round objects, and interacting with smaller individuals.”

The discovery of the paintings has intrigued researchers, viewers and archaeologists alike. The paintings in the caves of Bastar were discovered under archaeologist J.R. Bhagat, who deems it an ‘incredible find’. The paintings have been dated to at least 10000 years ago! NASA and ISRO have been contacted to have a look at the paintings so that further research could lead to more incredible findings. To quote The New Indian Express, “While references to aliens and UFOs exist since antiquity, there have been few scientific explanations of the subject. To fill the gap, the state archaeology department has sought help from NASA and ISRO experts.” 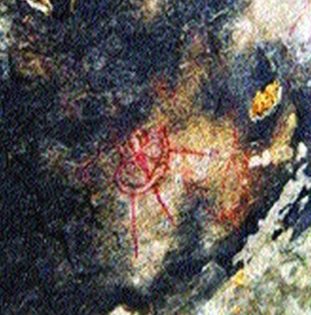 Bollywood and Hollywood portray UFOs as depicted in the cave painting in Bastar. The extra-terrestrial beings are also depicted in similar fashion as the 10000 year old cave paintings. To quote India TV News, “Bhagat goes on to elaborate on the fact that it is a co-incidence that such ancient images appear to have sharp resemblance to UFOs shown in alien movies.” Did Bollywood and Hollywood members visit this site before they could give shape to their imagination? Probably not! Isn’t it a co-incidence? This justifies UFOs and extra-terrestrial beings were real during pre-historic times in India!

Did ancient Indians paint the UFO object out of their imagination thousands of years ago? Certainly not! Bhimbetka cave paintings depict horses, hunting scenes, Nataraja, worshipping of trees, battle scenes, and lot more. Traces of human habitation here date back from medieval era to 1 lakh years. The paintings date back from medieval era to over 40,000 years. The artists there have painted life and objects as they saw. Likewise, ancient Indians in the Bastar region indeed witnessed landing of UFOs. They came in contact with the extra-terrestrial beings. And they depicted what they saw.

According to the local villagers, as per oral narrations transmitted from one generation to the other, ‘Rohela people’ landed from outer space in a round shaped flying object to their region and took away one or two persons who never returned. To quote India TV News, also reported by more news portals, “There are several beliefs among locals in these villages. While few worship the paintings, others narrate stories they have heard from ancestors about “rohela people” — the small sized ones — who used to land from sky in a round shaped flying object and take away one or two persons of village who never returned.” 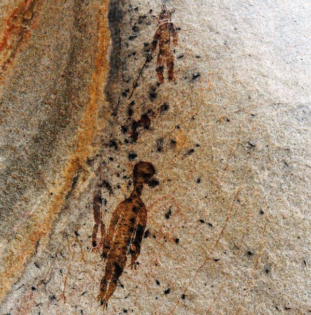 Are UFOs and landing of extra-terrestrial beings on earth from these space ships still a happening phenomenon? There has been news time and again about this across the world. The Statesman published a related incident in August 2018. To quote the newspaper, “It is not uncommon in Madhya Pradesh that commoners claiming sight of UFO in nearby areas till this date. The latest entrant to the list of people in Madhya Pradesh that have claimed to have seen Unidentified Flying Objects (UFO), is state Agriculture and Fisheries Minister Ramkrishna Kusmaria in July 2014. Kusmaria said while he was on an official tour he spotted an UFO in Sukha village in Damoh district, about 135 miles from ancient cave painting site.”

The 10000 year old cave paintings of UFOs and extra-terrestrial beings in Chhattisgarh have indeed set a challenge to scientists and historians alike! We can only wait for further research on this.

References: Presented in the article body itself with clickable links in italics.

Pratyasha Nithin: Invoking the Deities to Descend on Earth through Her Paintings