You Swept not Just Votes, But Also Hearts of Indians – A Citizen Reflects on Modi 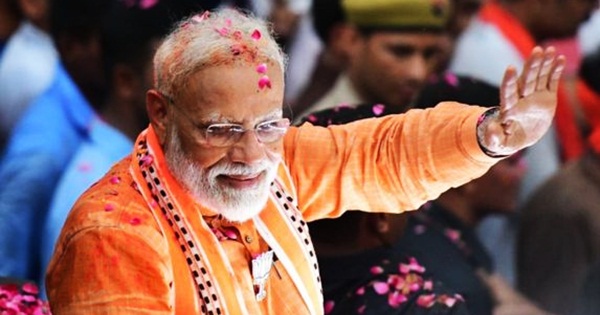 What an incredible example you have been for so many of us, including, no doubt, your own party and your administrative machinery.

Thank you for your career, your chosen vocation in public life; India is emerging with a new identity, eclipsing the projected differences of the recent past, under the ambit of its enduring civilization and possibilities of a holistic, all encompassing future.

You have proved, in your exemplary style, that, democracy is most powerful when it’s inclusive and attainable, embracing everyone.

How profound and so very touching as it echoes the sentiments of all Indians!

I thank the reporters of the fine print – the sensible ones for their insightful reporting recently, especially for their observations on what could have well turned out to be one our nation’s most tormented times, that Modi Ji reclaimed for us!

It is clear no Indian opposition has or will immediately be able to groom a leader with your kind of nationalistic sage qualities.

The truth being, today we have no one who could match up to your caliber, in any other political party, leave aside Indian politics, but I can’t think of an international leader who can match up to you in stature, credibility or public appeal.

You swept not just votes, but the hearts of Indians!

In your Karma Bhoomi, you were welcomed with sincerest adoration, admiration, and respect by your team, as we were watching.

You paid respects to the Constitution and Vajpayi ji, the seniors and Gurus: this genuine cultural character of Bharatheeya Sanskar, is a leitmotif in your personality.

Your orientation to the MPs and allies on their new chosen vocation was outstanding in it’s sagacity, rationale, which was logically positioned, and presented in your laudable tenor.

What I liked best in your speech is when you reiterated that, Modi himself is Modi’s challenger!

Your addressing them was a historical speech in it’s entirety on multiple accounts, as you reminded the MPs and allies about their media concordats in the coming years, to exert prudence and render humility while executing their duties, a crucially significant message to set the tone of the new term, that they live duty-bound, gracefully, and remain humble and not lose touch with the people, that, this opportunity to be in parliament is a gift they should make worth their while, as it was possible only because of the hard work and sacrifice of genuine public.

One more highlight was, you drove home the reality of ‘minority issues’ and the way they were used only for divisive politics.

It is my hope every citizen would listen to your this remarkable speech, to remind themselves that very little would have been left of the psyche of the nation that was conquered, plundered, ruled and abused for 700 years, followed by decades of misgovernance, if it weren’t for you.

I have found that contempt, derision, and misdirections from some pockets in this country, were exhibiting symptoms of deep fears for the truth that could be exposed by you.

A free press is vital to a democracy, but, abusal of the same FoE, and privileges, were rendered to making a mockery of journalism and news reporting. Corporate media houses were preoccupied only with increasing their profit, have bowed to pressures, negligently, aiding and whetting antinational forces for too long.

I can’t over emphasize on the need to invest our time and effort in press and social media, to show we value truth, facts, merits, real issues, even when we differ on policy and politics.

I pray that the Gods continues to grant your request as you have endeared so many of us with your innumerable contributions across this nation.

May MahaDev and Bhagwan Shri Ram bless you and all your endeavors.

I declare you an undisputed global leader!

Jaya Nair is a Bangalore based educationist and philanthropist, associated with global and Indian educational partners. Her areas of expertise and interests are Human Development, Neuroscience, and Early Years Education.