PepsiCo’s Lawsuit against Farmers – The Real Face of Bio Terrorism 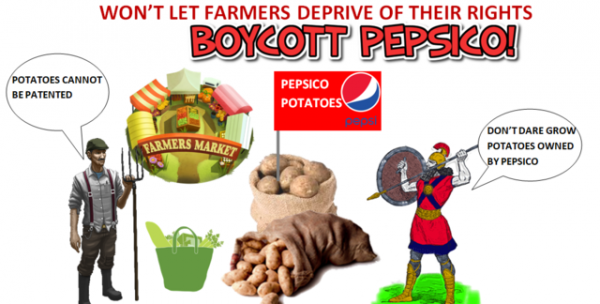 Profit hungry corporate monstrous giants like PepsiCo are nobody to tell the farmers what to grow and what not and especially when they are indulged in activities of promoting bio terrorism and to simultaneously benefit the prevailing western pharma and healthcare industry which is another profit hungry monster and butcher.

While corporate giants like this  have no product to offer that delivers health benefits and instead sell health worsening products engaging in bio terrorism so that the westernized healthcare industry can make profits too simultaneously, it has also left no stone unturned to use coercive measures against the farmers. This definitely calls for a complete boycott of all its brands namely: Pepsi, Dew, Lay’s, Quaker Oats, Tropicana, 7 Up, Mirinda, Aquafina, Cheetos and outlets of its coffee chain Starbucks, PizzaHut and KFC, etc. 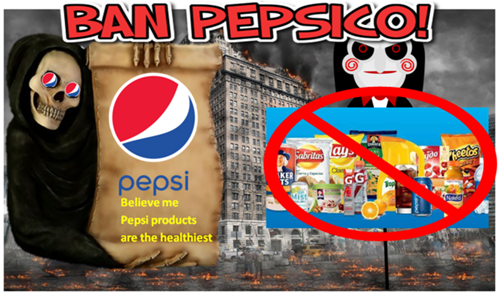 The lawsuit filed by PepsiCo is not only sheep-headed and invalid but is also an attempt to arm-twist the farmers and orient them in its buyback programme in the name of reaching a mutual settlement. While giants like these have continued to suppress farmers of their rights, it has now become even more important to make appropriate changes and deletions in the articles framed during the Britain’s loot in Bharat which ultimately crushes the farmers’ rights under debts, hunger and poverty. This lawsuit also marks the indication of the start of the ‘Indigo Farmers’ chapter during the British loot and plunder history in Bharat once again.

PepsiCo openly promotes bio-terrorism through activities such as using animal and human kidneys to flavour its trash products. PepsiCo is linked to Senomyx, an American based biotech that sells its research of faking taste using animal and human body parts. PepsiCo products use this technology of ‘faking taste’ in all its products and ultimately spreading bio-terrorism globally. PepsiCo is openly playing with the human lives by secretly imbibing poisonous chemicals and other stuff in all of its products so that its products taste better than its rival brands.

These products are being sold to deteriorate the health of innocent individuals who have then no option but to resort to the available drugs and medical care system in order to regain their lost health but the bitter truth of these hospitals and drug manufacturing companies is that they are actually a major part of this big vicious network of bio terrorism. It is also questionable that why such hospitals do not have mechanism or framework for 24 hour access to the ICUs for the relatives of the patient either physically or virtually.  These companies secretly fund hospital industries for smuggling embryos and other human body parts (kidney, liver, reproduction systems, heart, lungs, intestines, nails, hair and many more) of ill people who are admitted in the hospital whether declared dead or still in ICUs where no one else is allowed. These smuggled body parts of people are then used as a source for new researches on enhancing taste of food products. The body parts are chemically enhanced and preserved as unique taste enhancers. Sometimes human or animal poop is also researched upon during taste enhancement experiments and may have been used as a major ingredient by poison manufacturing company.

Pepsi is not alone which does this. Nestle, Kraft’s Cadbury Unit, Mondelez’ Chocolates and candies all have collaborations and partnerships with such biotech firms that use human embryo kidneys and other human body parts received from hospitals. 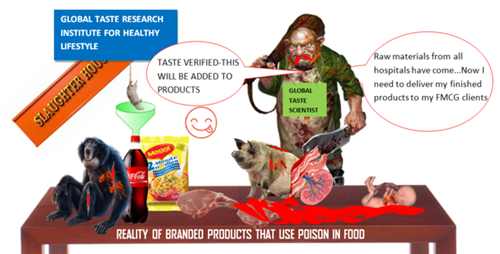 A vicious racket is being run by big FMCGs, beverage companies, hospitals that follow western healthcare system of mistreatment and biotechnology firms involved in production of taste enhancers, food additives and flavouring substances and western drug manufacturing firms on a global level.

The western medical healthcare system including the drugs, vaccinations and hospitals are a major chunk of this bio terrorism racket. The motive is to extort money from people by instilling fear in their minds about their health concerns and ultimately encashing the people’s fear of death. This western medical healthcare system is based on the extorting money through reinventing names for fictional diseases and aggressive promotion in the name of premium medical care equipments.

This multi trillion dollar industry is operating unethically and immorally by spreading communicable and fatal diseases through viruses and bacteria and then treating them through antidotes and so-called drugs and vaccinations. The truth is that the research is first conducted to develop different and deadlier versions of existing bacteria and viruses which are renamed to portray them as newer viruses and then drugs, medicines and vaccinations for the same are invented. 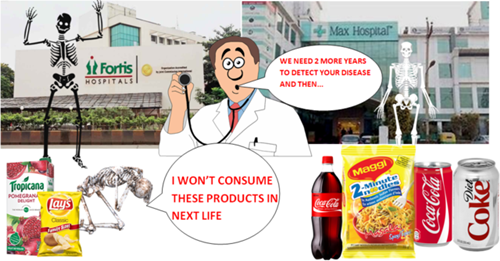 This doesn’t just stop here – The westernized hospitals have tie ups with medical equipment manufacturing companies, drug manufacturing firms and biotechnology companies which in turn are either subsidiaries or have partnerships with food and beverage giants. While the western healthcare system is solely based on mistreating patients on the diseases that are spread by themselves or their partners in this huge network of bio terrorism, it also offers no results in fully curing the diseases created by them.

Instead the ICUs of these hospitals are slaughter houses where medical kidnapping is done of the diseased person – the diseased person’s relatives are forced to admit their dear ones just to be ill treated, make money on the name of intensive care charges and then finally declaring a person dead or mis-using and smuggling the body parts in the name of organ transplants.

The organ transplant is one such bigger product of this global bio terrorism racket. The body parts including kidneys, hearts of individuals and even unborn foetus is then sent to their partner company which is a part of this global scam network which researches and uses cell lines for making flavour enhancers and addictives that work as a slow poison. These are then used by the subsidiary or partner food and beverage manufacturing companies. The so- called healthy food products made thus taste good and children and adults get addicted to them which in turn work as a slow poison and the health starts deteriorating slowly and the natural immunity in the body diminishes or gets altered creating a plethora of auto immune disorders. 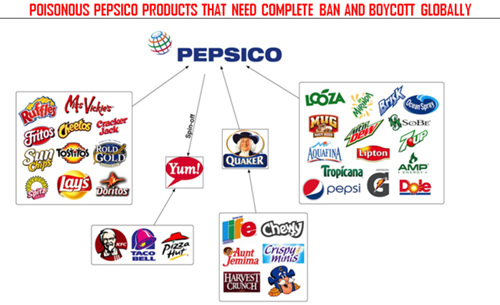 The individual has then no choice but to take the available drugs and vaccinations which are simultaneously manufactured deliberately to partially cure one disease and mark the onset of another disease, which they so refer to as side effects are actually deliberate manipulations to cause multiple slow progressive diseases. Ultimately, years on years the persons keep on taking such drugs and reach the hospital ICUs someday where they are butchered both financially and physically.

This also calls for a ban on this entire network of such hospitals which are involved in smuggling and trafficking of organs in the name of organ transplants globally. This vicious circle in the scammed network of these butchers keeps going on and never gets broken because an innocent individual is trapped in this in the fear of losing health and life. This vicious network needs to be broken and individuals across the globe must get together for total boycott and fight against this highly complex and strong network of bio terrorism. Health insurance companies form a secondary chain of this highly complex, widely spread clustered network. Many big hospital chains are a part of this network. These hospitals receive funding from the insurance companies from where the individual has got insurance and through the biotech and research divisions of these corporate giants. 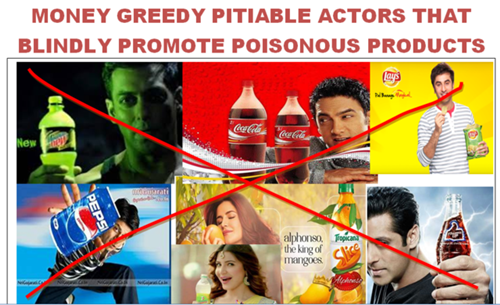 It is really shameful that many actors blindly endorse health worsening food products like Pepsi and Coca-Cola drinks which are claimed to be soft-drinks however most of the times these drinks have been associated to pests, insects, fungus, toilet cleaning and more. Actors or models cannot just get away stating that they have just been paid to advertise for the said brand and that is what their business is all about. It is shameful that these famous actors promote products of companies that suppress the farmers of their rights and make false claims that they are helping increase farmer’s income instead and also play with the lives of people by engaging in this huge network. The endorsers are really pitiable as they also constitute a part of this global scam networked to promote bio terrorism.

Since these actors are just after petty cash and have no morality and they won’t stop endorsing such products, it becomes all the more important for individuals to be aware of them too and not blindly follow these money chasers and get influenced by them and the products they endorse.

Following is a list of PepsiCo subsidiaries, brands and plethora of unhealthy product range that need total boycott:

Bodh Nanda is a social activist and independent researcher, actively involved in food and crop research, safeguarding farmers' rights and has previously worked with corporates.

31,000 Farmers Benefited by Two Brothers, Who Briefly left Lucrative Business in Europe to Support Them