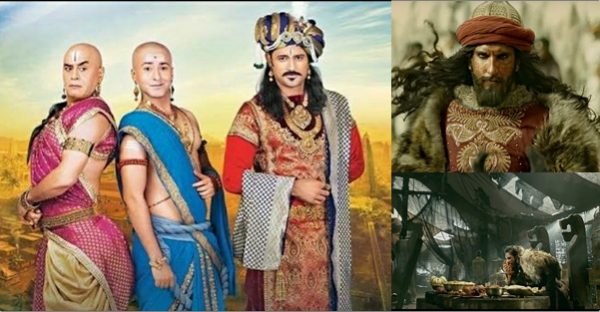 We Indians are the most shameless, pride-less and gutless people with extreme deficiency of self respect. A community, a state or a nation that does not respect its history will never be taken seriously and will remain a third world country forever. We are utterly careless about our icons while we get insanely jingoistic about as trivial a thing as a Cricket match victory over Bangladesh. That is why we find it tough to find respect among ourselves and in the world community.

Let us revisit how our popular art has depicted our history. Film Padmavat was a terrible waste of time. The extraordinary valour of Gora and Badal was reduced to less than a minute of screen time while Padmavati hunting in a jungle went on till eternity. Inane songs and long drawn out rants of Alauddin Khilji consumed most of the running time. Even the roast beef that Khilji gorges on got more screen time than Gora and Badal. Padmavat was turned into a story of Jauhar that left everything else redundant in a glorious story of valour, war, treachery and sacrifice of a great Rajput kingdom.

The greatest hero of India, the Peshwa warrior and the truly undefeated Bajirao Ballal Bhat was reduced to a roadside Romeo and lovelorn loser in Bajirao Mastani. A man who defeated everyone in vicinity and never lost a single battle out of the 41 he fought was made to look like an imbecile Majnu in a juvenile love story. Even Pandit Jawaharlal Nehru had very little time for such a hero in his Discovery of India.

Sony TV presented a serial on Peshwa Bajirao. It dragged the childhood stories of Bajirao, glorifying him by overlapping him with many of the childhood stories of Shivaji. Once the grown up Bajirao arrived, the serial took a nosedive into obscurity and was withdrawn, giving it a speedy burial thanks to falling TRPs. Not a single victory of the greatest Indian hero was shown in a serial that dragged for over 6 months.

Television serials on Maharana Pratap, Shivaji and many other heroes never rose above mediocrity. Except for Akbar the Great, Sword of Tippu Sultan and Bahadur Shah Zafar, the Aakhri Mughal, no cinema or serial has done even 1% justice to our history. Bharat Ek Khoj was a Nehruvian version of history but was a decently made serial. But again, there was very little space for the Marathas, several great heroes from South India and warriors like Lachit Bhorphukan. Chandraprakash Dwivedi made a fairly modest job with his Chanakya.

Time and again, Bollywood has diminished our history to utterly jaded nonsensical Masala. Fortunately, the Tamil, Telugu and Kannada movies have given us some prouder versions of history, though in technically inferior and often grossly exaggerated movies.

Another addition to the historical disasters is the tele-serial Tenali Rama on Sab TV. It is understandable that Sab TV is a comedy based entertainment channel. But such gross, blatant and criminal distortion of history would have been unpardonable in any other culture except India. We just don’t care or respect our heroes. Forget about respect, we don’t even know our heroes.

Let us learn a few things about Tenali Rama. Tenali Ramalingacharyulu or Tenali Ramakrishna or Garlapati Ramakrishna was one of the eight great scholars (Ashta Diggajas) in the court of Emperor Sri Krishnadevaraya of Vijayanagar empire in the 16th century. He was called Vikata Kavi and was a hugely respected jester as well as a poet. He authored Udbhataraadhya Charitamu about the sanctity of Varanasi and Panduranga Puranamu based on the popular folklore on Panduranga, the deity of Pandharapur.

Tenali Rama was a friend, philosopher and guide for Emperor Sri Krishnadevaraya. Many of their stories have been converted into Akbar Birbal stories by later day writers while many fables attached to Rama appear to be inspired from the stories of Kalidasa. Rama was a witty, intelligent and honest man totally dedicated to Sri Krishnadevaraya. He was heartbroken after the death of the king in 1530 and was reported to have retired to his native place Tenali. He finally breathed his last following a snake bite, though no significant details are available about his life away from Vijayanagar.

Now let us learn a little about Sri Krishnadevaraya, who was called the “Destroyer of Turks” and remained unconquered throughout his two decade long rule. He ruled Vijayanagar empire from CE 1509 to 1529. Before him, the pesky Bahamani rulers used to raid and plunder parts of Vijayanagar and were a constant thorn in the flesh for the prosperous Vijayanagar. Sri Krishnadevaraya crushed all the Bahamani Sultans in a series of raids. He conquered Golkonda and Bijapur and installed his vassal as proxy ruler. His general Pemmasani Ramalinga Nayudu razed down the Gulbarga fortress in the decisive battle of Raichur in 1520 CE.

Sri Krishnadevaraya also defeated the Gajapatis of Kalinga, the Kammas of Kondapalli and kept the Portuguese of Goa under control with friendly relationship. The Vodeyars, Nayakas and other smaller kingdoms remained loyal and subservient friends. Sulaiman Shan Tahamasp I, the Shah of Persia and the Portuguese maintained extremely cordial relations with the mighty Sri Krishnadevaraya.

Portuguese traveller Domingo Paes has written extensively about the prosperity of Vijayanagar empire and the greatness of Sri Krishnadevaraya. At the peak, the army of Krishnadevaraya consisted of over 7,36,000 foot soldiers, another 20,000 highly trained reserve army, more than 32,600 cavalry and over 550 elephants. Sri Krishnadevaraya had become the unchallenged monarch of South India by 1521 CE. He had strong Naval troops with which he raided Sri Lanka several times to quell unrest.

Allasani Peddana, the Andhra Kavi Pitamaha, Nandi Thimanna, more populary known as Mukku Thimmanna, Madayyagari Mallana, Dhurjati, Ayyalaraju Ramabhadrudu, Pingali Surana, arguably the most talented among the eight poets, Ramaraja Bhushanudu and Vikatakavi Tenali Rama were the eight stalwarts in Sri Krishnadevaraya’s court. Though Tenali Rama’s body of work was never a match for the works of the other seven, he was a favourite of Sri Krishnadevaraya because he acted as a stress buster for the short tempered Emperor.

The Portuguese traveller Domingo Paes has written extensively about the prosperity of Vijayanagar empire and the greatness of Sri Krishnadevaraya. Let us keep his personal life, acts of great benevolence, unhindered support for arts and literature, imaginative rule, intelligence, strong decision making and people friendly administration to another story on another day. Let us come back to the future to CE 2017 – 2018 and take a look at how Tenali Rama, the tele-serial is depicting Sri Krishnadevaraya.

The serial produced by Sony Entertainment Television and directed by the Kannada director Nagabharana shows the chief protagonist Ramakrishna doing everything. Thimmarasu was the brave, strong and intelligent Prime Minister of Sri Krishnadevaraya. Some historians believe he was also called Tathacharya and was the backbone of Vijayanagar empire. In the Sab TV serial, Thimmarasu is a pot bellied and semi-competent sidekick of Rama, who does everything according to Rama’s plans.

Tathacharya is shown as a desperate character in the serial. He is a villainous buffoon, always plotting the downfall of Rama but finally ends up with egg on his face in every episode. He’s also shown as a lecherous man lusting for the Rajanartaki or Court Danseuse. He has two dumber students in Dhani and Mani, who are worse than those caricature buffoons from the 1970s Kannada movies Nagabharana grew up watching.

At the time of writing this article, Emperor Babar is plotting to attack Vijayanagar in the serial and Tenali Rama single handedly wins over Babar by his intellect. What history says is that the paths of Babar and Sri Krishnadevaraya never crossed. Babar simply had no time, inclination or necessary firepower to fight the extremely well established Vijayanagar empire. Stories of Tenali Rama’s encounter with Babar were just fairy tales woven by fans of the Vikata Kavi. There are absolutely no authentic or trustworthy records of Babar ever having nurtured ambitions of taking on the might of Sri Krishnadevaraya.

Let us now come to the worst part of the Tenali Rama serial and that is the portrayal of Sri Krishnadevaraya. The role played by Manav Gohil sports a trendy soul patch or a Jazz dot under his lower lip and is completely bereft of the dignity and greatness associated with the great Emperor. He is scared of snakes. He tries to shirk responsibility when a tiger creates terror in the villages. He is constantly pestered by his second wife Tirumalamba with her atrocious cooking and outrageous dishes like Bitter gourd Halwa. He is easily fooled by petty thieves and the idiotic Tathacharya. Yet, he continues to respect Tathacharya as Rajguru in spite of innumerable instances of dumbness and dishonesty by the cunning and bumbling Tathacharya.

Sri Krishnadevaraya was a short tempered man with innate goodness. He prided in the system of justice nurtured in his nation-state. His Ministers as well as advisers acted as adjuvant forces under real Sri Krishnadevaraya. But the serial shows Tenali Rama solving every single problem with the Emperor being a glorified rubber stamp to attest the greatness, wisdom, intelligence and patriotism of Rama.

It is understandable that Sab TV is an entertainment channel and they are aiming to present a comedy show. Any mature civilization has to accept humour, criticism and spoofing of their icons. But such acts can look commendable only if the mainstream art forms have explored the real history and projected the real and sincere portrayal of the heroes. In the absence of even a single Hindi movie or serial that has given an authentic account of Sri Krishnadevaraya, the present serial comes across as crass, crude and creepy.

This serious and chronic lack of self respect, pride and love for one’s own history is the reason India was invaded, pillaged, enslaved and looted for centuries. When our history books blank several great heroes and glorify a select few and when our popular art forms turn our icons into caricatures, we as a nation become a joke. We deserve all the scorn, contempt and obscurity in the world order. A country that does not respect its heroes deserves its villains.

India should Crack Down upon Terror Sympathizers within the Country

A History of Head Coverings in India: Turban and Head Veil/Ghoonghat