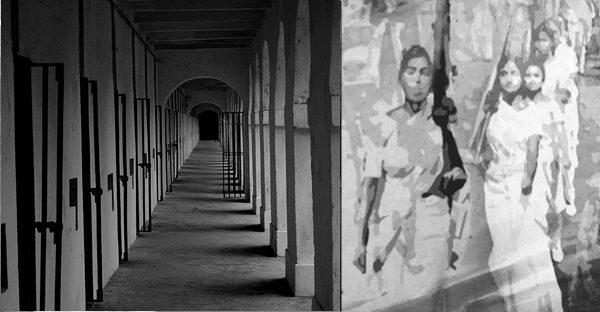 Like thousands of unsung freedom fighters, her name is in oblivion in the pages of History. She is Kalyani Das Bhattacharjee. Almost all her family members actively participated in India’s freedom struggle. They were jailed and tortured. Her younger sister Bina Das attempted to assassinate Stanley Jackson, the Governor of Bengal in the Convocation Hall of the University of Calcutta in 1932. She fired five shots but failed to assassinate the Governor. She was captured and sentenced with nine years of rigorous imprisonment. News hit the headlines in India and Britain related to this incident. Both sisters were members of Chhatri Sangha and later of Jugantar Party, groups in Bengal that masterminded the assassination of many British officers.

Thanks to a first-hand account on the many unsung heroes and heroines by Kalyani Das Bhattacharjee in her book Jeebon Adhyayan, which was translated to English by Dhira Dhar titled A Study of Life and published by her son Jayabrata Bhattacharjee. Most of the stories were related to her experiences in jail as well as about the life and role of many freedom fighters she came across during her imprisonment.  Hundreds of freedom fighters from all age groups including teenagers and the old, were sent to jail with or without trial. Many were tortured to death while many were hanged and hundreds deported to Kaalapani.

Kalyani Das and other freedom fighters in jail were subjected to torture and other sufferings. But they could never complain as this would subject them to harsher punishments. Regarding this, she wrote, ‘As rebels against the government, we had no inclination to complain about our suffering in prison.’ She also wrote, ‘The Presidency Jail was infested with mosquitoes and it was a hard task to sleep at night.’ On winters, she along with fellow inmates in jail shivered ‘as the chill seeped from the damp floor through the thin blanket.’ Kalyani Das was first imprisoned in Presidency Jail and after a few months shifted to Hijli Jail. Why? Because she influenced few freedom fighters to raise their heads in protest and taught other convicts to be politically conscious. The jail authorities thought it would be dangerous to keep her in the same jail. 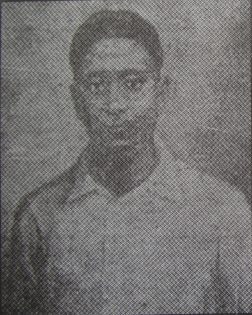 Before she was imprisoned, she had come to Hijli jail along with her eldest brother Bimal Das after one such incident of shooting by the British. In the author’s words, “We were not allowed to see the wounded prisoners, but we tried to gather information about them the whole day. One prisoner had his arm amputated, but still there was a smile on his face. Many were wounded by a baton charge. After the shooting, when the prisoners fell on the ground other prisoners came forward to help them, but they were also wounded with bayonets….”

Kalyani Das mentioned in her book about Santosh Mitra and Tarakeswar Sengupta, who attained martyrdom in prison as a result of the shooting. Their dead bodies were taken to the burning ghat at Keoratala on the banks of the Ganga in a torch-light procession at night. To quote her further, ‘The stillness of the night was broken as the pallbearers cried out “We want the blood of tyrants!” And the darkness was shattered by the flames of the burning pyres…’ 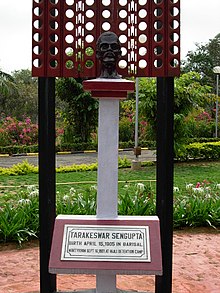 ‘Later, in a large meeting at the Ochterlony Monument in Calcutta, the great patriot Rabindranath had recited these immortal and sonorous lines:

“Have you forgiven those who are poisoning your air and putting out your lights? Have you loved them, too?”’

Here are accounts of few unsung freedom fighters described by Kalyani Das Bhattacharjee in her book. Few of these warriors are unknown.

It was 1930. Bibha was only fifteen or sixteen years old when she was jailed for ten months in Presidency Jail. Kalyani Das, the author, was already imprisoned there then. For Bibha it was love for the motherland that was greater than the bond of love she shared with her parents and siblings. She left home and joined the secret revolutionary groups of Bengal. She was only a teenager then! She, like many other girls, joined the Civil Disobedience Movement.

Bibha addressed a citizens’ meeting at Hazra Park in Calcutta urging her audience to disobey and act against the government. She was warned by the police. She addressed a gathering again, not paying any heed to the warning given by the British police. This time they arrested her and sent her to Presidency Jail.

It was only a few days of prison life for Kalyani Das when Bibha came to jail. She easily adjusted herself cheerfully to her new prison environment. In the words of Kalyani Das, “When, like us, she was made to wear a frock, she laughed and said, ‘This is wonderful! I don’t think I’ll ever wear a sari again!’”.

A few months later, Kalyani Das was shifted to another jail.  She learnt that the Matron had punished Bibha by making her clean the wards. She had forced her into a solitary cell on false charges of attacking her.

Freedom fighter Shoba Rani was Kalyani’s close friend. They together participated in several freedom movements. During one movement, the police arrested her and tortured her during custody. Signs of torture were visible all over her body. So brutal was the torture inflicted on her that she became bed ridden soon after and became paralyzed for life. Kalyani Das often went to meet her. She saw the country attaining freedom.

After India gained independence, Shobha Rani witnessed that families of many freedom fighters and martyrs were starving and dying in poverty. The British had confiscated the properties of many freedom fighters and martyrs, forcing their families to live without food and shelter. The independent government failed to do anything for these families. Moreover, the youth started forgetting the sacrifices of the martyrs. One day, holding Kalyani’s hands when she went to meet her, she said (as written by the author),

′′Kalyani, so many young people gave up their lives in the quest for freedom; today their families are starving and dying in utter poverty. Our country is not doing anything for them. The young people of today do not know anything about these martyrs. Let me get well, and then both of us will write the history of their lives.”

Later Shobha Rani succumbed to those tortures by the British police. With her death, her dreams of penning down the history of the freedom fighters were gone! But Kalyani Das kept her friend’s words. And she wrote this book Jeebon Adhyayan. 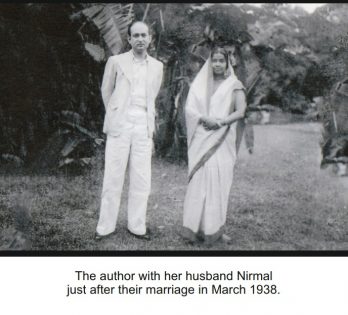 Two grandmothers were also arrested and imprisoned in Presidency Jail when Kalyani Das was brought to the jail.  Hundreds of freedom fighters were already jailed in the dark dungeons of this jail. Not only teenagers but also mothers and grandmothers had participated in the freedom movement and were arrested and jailed. In a day or two, the inmates were generally made to wear the jail uniform, which was made of coarse material and was uncomfortable to wear. These were short frocks.

Kalyani Das saw the Matron of the jail forcing the two grandmothers to wear the coarse frocks. She and her companions interfered but in vain. They gave up persuading because if they refused to wear the frocks, they would be wrapped in jute cloth and thrown into a dark cell, away from other inmates.

The grandmothers could not but obey the orders of the Matron. Soon after they changed their attire, they were taken to a room for grinding lentils. Grandma was completely out of breath after a short while at the grinding wheel. 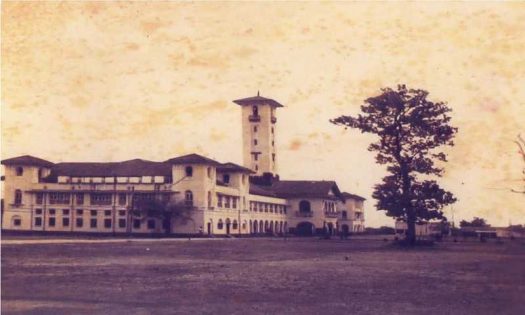 A fifty-year-old married lady was also arrested along with Kalyani Das Bhattacharjee. All were brought to Presidency Jail. Kalyani addressed her as aunt. The author describes the horrors of how she had to remove all signs of her marriage, which was part of the Hindu ritual.

In the author’s words, ‘She accepted the jail dress without any protest. She was married at ten, and all these years she proudly wore the gold-coated iron bangle along with the vermillion mark on her hair. She took off all her other ornaments, but prayed for permission to keep the iron bangle on. The matron was most insistent to take it off her hand, but even after a lot of struggle it would not come off. She had put it on when she was only ten and it had never been taken off.’

From the age of 10 since her marriage till the age of fifty, the iron bangle adorned her wrist. To quote the author further, ‘How could the matron slip it off her wrist when she was fifty? When, finally, the matron got a pair of clippers and cut through the iron bangle, the lady broke down in tears, because she believed she wore the bangles for her husband’s welfare. She had come to prison prepared to give up everything, but she had not expected to be deprived of her iron bangle and vermilion mark…’ 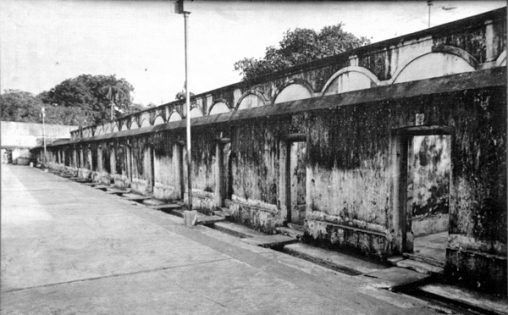 Today we live free, breathe free, eat-drink and make merry, meet friends and party. So are political parties and opportunists in smiles and ‘Azadi’ gangs shouting slogans of ‘fake freedom’! All at the cost of the sacrifices and martyrdom of thousands of freedom fighters! Jai Hind!!

Featured image (for representation purpose only) courtesy (painting of women with guns) – YourStory and The Independent (jail).

Key Ref: Jeebon Adhyayan by Kalyani Das Bhattacharjee; Translated from the Bengali Original by Dhira Dhar titled A Study of Life and published by Jayabrata Bhattacharjee.