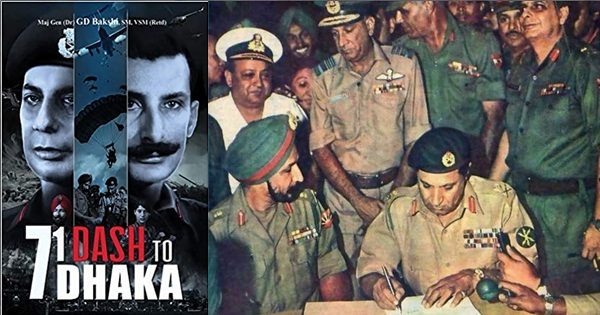 The 50th anniversary of the 1971 war for the Liberation of Bangladesh falls next year in Dec.on 13 Feb The Army Chief Gen Naravne released a book on this war titled 71 Dash to Dhaka. This explosive Book by Maj Gen (Dr) G D Bakshi, now lays bare some startling insights into how India’s most successful war since its inception was fought and won in just 14 breathtaking days. According to Maj Gen Bakshi, the 71 War is ‘India’s greatest military victory in last 2000 years’.

The 1971 war for the Liberation of Bangladesh was a landmark conflict in the history of South Asia and the world. It dramatically changed the map of this region and marked a historical revival of Indian military power. In just 14 glorious and action packed days- three Indian corps sized spear heads raced for the capital city of Dacca. It was located in the most defensible, riverine terrain in the world. Yet the Indian Blitzkrieg bounced the wide rivers using Helicopters and Paradrops to speed up operations and paralayze the enemy command centre with precision air attacks.

The India Air Force generated shock and awe over the battlefields of Bangladesh. Like an expanding torrent of water, the Indian army bypassed all major centres of opposition in its race for Dacca. Meanwhile the Indian Navy blockaded East and West Pakistan and cut off the two wings of the country. The plan is to make this into a mega, block buster movie for release next year.

After the second world war, these were decisive results in a cold war era chracterised by inconclusive wars and regional stalemates. This despite the American Seventh Fleet- led by the US aircraft carrier Enterprise, making menacing moves in the Bay of Bengal. This is the blow by blow, behind the scenes account of that war- how the critical decisions were arrived at- what major risks were taken and the superb planning and coordination between all organs of the Indian state – political, military, diplomatic and intelligence.

For the first time 71 Dash to Dhaka also provides an accurate insight into why the mighty PLA under Mao ze dong (who threw in a million troops into Korea to fight the Americans)himself sat paralysed through it all and did not dare to intervene – even symbolically. It simply let its most trusted ally go down fighting desperately. Despite fervent Pakistani appeals and American prodding-why did China sit out this war? 71 Dash to Dhaka clearly answers this seminal question. It also highlights the roles played by the USSR, the cynical and self serving role of President Nixon of USA and of course the roles played by the Indian political and military leaders, the Intelligence services and bureaucracies.

It was simply India’s finest hour. It unconsciously revived the Kautiliyan paradigm of war- fighting – premised upon a long preparatory campaign to destabilize the target state, build up forces methodically and then launch a sudden, fast- paced operation using war elephants in the mass for shock action- to decisively defeat the enemy and march onto his capital. Very unconsciously, this was the precise pattern of operations that  emerged in Bangladesh-whether by design or by default. it entailed eight months of preparation in which the Mukti Bahini harassed and stretched out the Pakistani army in the East. A sudden, 14 day blitzkrieg where air power was used to generate shock and awe and simply mopped up in the wake of that campaign of destabilization.

Kautilya used to insist upon achieving complete information dominance before launching the campaign. India was able to shape the global, regional and local information environments completely in its favour before commencement of hostilities. it focused radio- monitoring resources in the east to keep itself fully abreast of all Pakistani military moves. The Mukti- Bahini provided vital enemy and terrain intelligence. India shaped attitudes, emotions  and opinions all over the globe. India used the mitra  or the ally in the shape of the USSR to counter the highly  potent threat of the USA and China combine which was aggressively supporting Pakistan.

One of the key findings of this book is the answer to the historical conundrum- why did China not intervene in this war? It was then the million dollar question and led to a lot of concern in the Indian leadership right till the very end. With detailed historical hindsight 71 Dash to Dhaka answers the key question of China’s non- intervention in the most decisive conflict in South Asia that changed the very map of this region.

For soldiers all over the world this text book, tri- services  campaign provides highly pertinent lessons that are still valid in our times. It was a model tri- service campaign that saw superb coordination and synergy between the three services and all wings of the Indian state. Synergy and coordination has been a historical weakness in Indian attempts at war fighting. This in fact was the most remarakable aspect of this war. How it became a classic whole of the Govt approach and all wings of the Indian nation state worked in complete harmony to generate an amazing synergy that produced spectacular results on the battle field.

This was a war that saw the Indian political and military leadership at its historical best. So did the intelligence services and diplomats cover themselves with glory on how they supported clear-cut national aims and how a highly synergised strategic approach unfolded – almost on its own. Bakshi goes into details of the stellar roles played by Madam Gandhi, Fd Marshal Manekshaw, Air Marshal PC Lall, the Navy Chief Admiral Nanda- as also the lesser known but highly significant- in fact pivotal- planning roles of Lt Gen Jacob and Inder Gill and our best field commander Lt Gen Sagat Singh in 71 Dash to Dhaka. 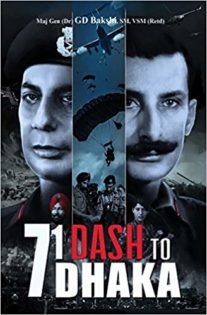 Above all, as Maj Gen GD Bakshi points out, it was a Just war- in keeping with India‘s civilisational concept of a Dharma Yudhha or Righteous war. The Bangladesh war therefore saw the revival of an Indian paradigm of war- fighting that had first been enunciated by Kautilya in his magnum opus – the Artha Shastra.

The Bangladesh 1971 war will always rank amongst the classic campaigns of the worlds military history. it is a campaign that should define the Indian Art of war-fighting and should be our text book model in the turbulent years ahead.