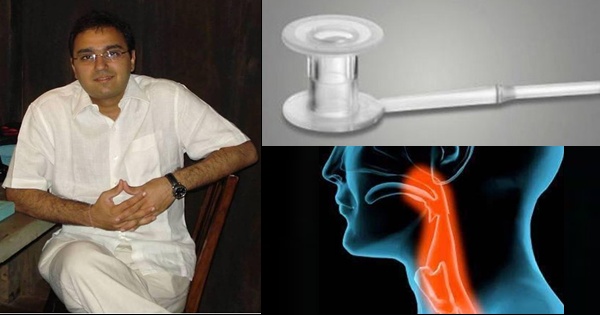 India is home to one of the highest incidences of cancer. It is the second killer after heart disease. Cancer of the mouth, throat and voice box is highest in India in the world context. Reported annual cases of throat cancer is as high as 50,000 with around 5,000 people diagnosed with stage-IV. There’s no procedure today to keep their voice boxes intact.

Dr. Vishal Rao is a ray of hope to lakhs of throat cancer patients in the country. This Bangalore based oncologist has developed an innovative and low-cost AUM voice prosthesis that helps throat cancer patients speak again after surgery. This device costs just Rs. 50. A boon for poor patients! No spending of thousands of rupees on an artificial voice box! He spends maximum time treating patients who have lost their voices to throat cancer.

His ambition in life during his teenhood was perhaps different. He did not imagine himself to be a doctor. Vishal Rao dreamt of becoming a automobile engineer or a biker. His parents influenced his decision and inspired him to study medicine as he had secured good marks in his biology exams. He continued to maintain his interest in other streams such as automobiles even while he pursued medicine. Even through his semester exams, he would sometimes be obsessed with learning how the internals of engines work.

He keeps his passion for motorcycles alive by riding around on his Indian Scout, a 1,000 cc beast.

Dr. Vishal Rao has vast experience as an oncologist (trained at Tata Memorial Hospital, Mumbai) besides head and neck surgery. He specializes in surgery for benign and malignant tumours of the thyroid, parotid and salivary gland surgeries, complex neck surgeries, such as radical and modified neck dissections, carotid body, other vascular tumours, and parapharyngeal space tumours. Few more of his specializations include transoral laser surgeries for early oral and voice box cancers and surgical organ preservation, endoscopic skull base surgeries with complex reconstructions. And the list goes on.

He believes in prevention to palliation approach to oncology. He runs an initaitive – Heal your life, Heal your cancer and works with several groups on holistic healing. Dr. Vishal Rao has always taken up social initiatives, especially on tobacco-awareness and dreams of a tobacco-free world.

Here is an excerpt of an interview of Dr. Vishal Rao taken by Manoshi Sinha, editor of  My India My Glory e-magazine.

Q. How did the idea about developing the low-cost voice prosthesis device crop up in your mind?

Dr. Vishal Rao: I always believed in innovating for individuals more than  masses or markets. Speech and communication in our society forms not only a basic tenet to sustain life force, but also a right for freedom, peace, justice, and dignity. Only due to cost constraints many of the throat cancer patients where bereft of this essential means of communication. This realization dawned on us when I had a throat cancer patient named Mr. Sannathimayya from village in the district of Chikkaballapur. He came to me for treatment of throat cancer illness. He was already operated and his voice box removed.

Mr. Sannathimayya’s main complaint was, “How can I speak again? I cannot afford the voice prosthesis. They say it costs up to Rs. 30,000.”

Serendipity  followed when my friend Shashank Mahesh, co-inventor of this prosthesis came up to my room for a causal visit. He is an industrialist with finance background. While sharing this quandary and desire to help this patient through donations to procure a prosthesis, he emphatically replied “ Why don’t we develop one – I’ll give you the industrial expertise and you give me the technical. Let’s go out and make a difference for these poor patients.”

Most patients in India who have throat cancer have it owing to smoking of Beedi and Cigarette. Majority of them belong to poor class. In advance stages, they are not fit for organ preservation. They end up loosing voice box. Hence, they find it difficult to afford a voice prosthesis after removal of voice box.

Q. Why is this voice prosthesis device called ‘Aum’?

Dr. Vishal Rao: AUM has 3 elements to it A signifying ‘creation’, U signifying Sustenance and M signifies Annihilation. This is not a religious connotation, but represents a primeval sound that signifies 3 defining principles of this universe.

We named this AUM as after these patients lose their voice box, they cannot speak again. This prosthesis gives them a rebirth into the world of communication which resonates and resounds all these aspects of creation. This prosthesis should come as a thanks giving to the almighty and help them serve and pay it forward to the needy, and also motivate and inspire other patients. 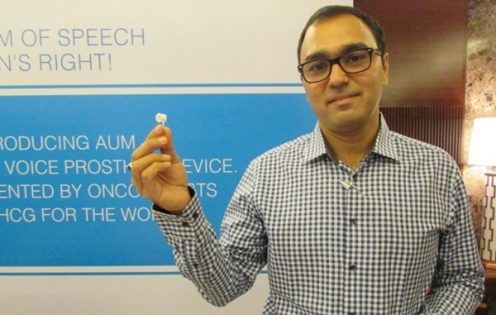 Q. Please tell us about this innovative prosthesis device and how it works?

Prosthesis is an artificial device that replaces a missing body part lost through trauma, disease, or congenital conditions.  Voice prosthesis is an artificial device, made of silicone that is used to help laryngectomized patients to speak. During laryngectomy, the entire voice box is removed and the trachea and esophagus are separated from each other.  During laryngectomy an opening between the food pipe and the windpipe can be created. This opening can also be created at a later time.  This opening is called a tracheo-esophageal puncture.  Most patients of throat cancer who undergo laryngectomy are unable to speak due to removal of voice box.  The patients eat through their mouths but they cannot speak as there is no voice box.  Accordingly, there remains a need for an improved device with one way valve that enables laryngectomy patients to speak.

Q. Your experience with the first patient using your prosthesis device. How many patients have been benefitted till date?

Dr. Vishal Rao: I fondly recollect the day I had a patient from Durgapur. He visited us hearing about the voice device. He had just arrived by train that morning. When I met him, he had a food pipe for feeding and hadn’t eaten from mouth since more than a month after his throat cancer surgery. He wanted to speak using the voice prosthesis, but had realized after throat cancer surgery that its cost was beyond his reach, as his monthly earning was only Rs. 5,000 Rs. On hearing about Aum from some doctors, he took the next train to explore possibility of using our device.

My receptionist said the man was very poor and didn’t have enough to register for a consultation too. I didn’t understand Bengali, but my junior did. We saw him and told him we will place the device. It took us less than 10 minutes to insert the device and he spoke instantly. I asked my junior to send him back to his hometown. 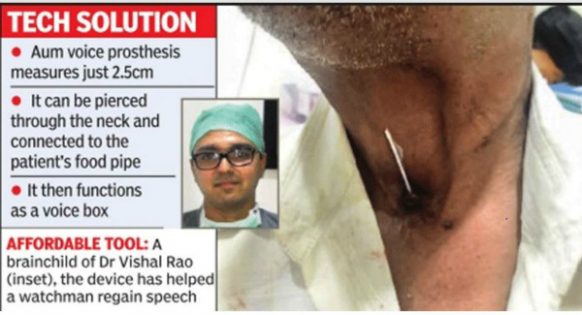 Couple of hours later, when I was over with my outpatient clinic and came out of my room, I saw him wait outside. I wondered why he is still here. At that moment, he rushed to me and hugged me! He said he thought about the process to be lengthy, right from getting a parchi (receipt) to getting admitted and the whole process taking several days!

I was overwhelmed with joy at his reaction. This feeling of love and blessing from a patient is what money cannot buy and was perhaps my most memorable experience.

Q. Where can a patient buy this device? Can it be fitted in any hospital?

Dr. Vishal Rao: Currently, we have completed the clinical studies for this prosthesis as mandated by medical rules. If a patient is eligible, he could avail this prosthesis by visiting our centre.

Alternatively, currently we are distributing the device free of cost by sending it to trained doctors from across country to meet the need of needy patients.

Yes, it can be fitted even in a district hospital, but needs trained experts. We hope to first reach out to all the regional cancer centres where most of the poor patients go for their treatment. We have now filed patents for this device and also received scientific and ethical approval to start using this prosthesis on our patients and conduct a study. With these approvals, we plan to initiate a country wide study involving several interested centres to use the prosthesis and give us a feedback on its functionality. This would help us to improvise it better.

Q. Any recognition from the government or national/international organizations on your invention?

Dr. Vishal Rao: Make in India and BIG grant has supported the development of this device to make it effective. Rotary conferred the Vocational training award in recognition of this contribution a year ago. 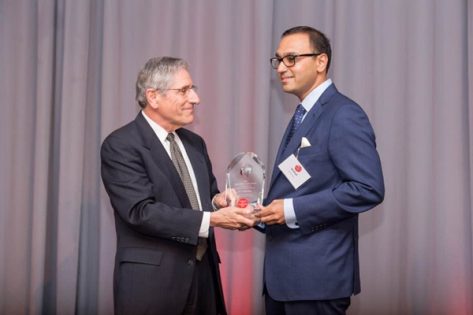 Q. Your view about throat cancer and preventative care.

Dr. Vishal Rao: I truly hope and pray we do not need to use this artificial voice device and patients should have an original God gifted voice box to themselves. Tobacco contributes to more than 90% of the cancers of head neck region including throat cancer. This is a preventable disease. Tobacco control is the only way ahead. Ideally this department need not exist if not for tobacco. We are busy finding a new anti-dote when we can eradicate the poison.

Q. What are the symptoms of throat cancer? Can it be detected in its early stage?

Dr. Vishal Rao: The most common symptoms are change in voice, difficulty in swallowing or an ulcer/swelling that persists for more than 1 month. Sometimes, even blood in sputum persistently can be a sign.

Q. Your message to readers and the patient community.

Dr. Vishal Rao: The word Health is often misconstrued and become synonymous with disease in today’s world. This is because medical care only focuses on disease. Health is a state of absence. Repeating the words of Sri Sathya Sai Baba –

“A Healthy society should have less doctors, less hospitals and less illness” that is goal of health.

We need to reinstate the respect and faith of patients on doctors through – improved Concern, effective Communication and eliminating Commercialization.

Lastly, ambition and purpose are a lethal combination. When they meet inside, you change. Dare to dream and then be wise to wake up and act.

Why does Cancer Reoccur? The Puzzle!

Rahu Transiting in Cancer from 18th August: Know What Is in Store for You