Diary of a Kashmiri Pandit: An Exercise to Exorcise 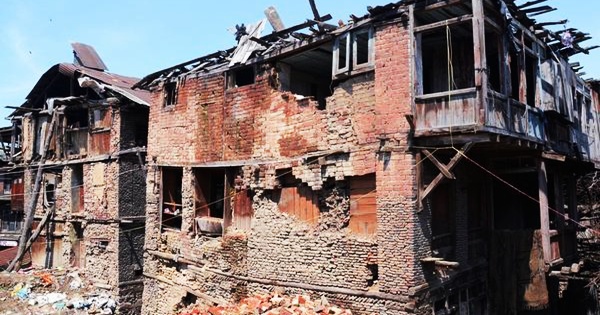 This post, or call it what you will, has been brimming in my mind and heart for ages – waiting to be penned down but never seeing the light of the day. To tell you the truth, it has always seemed to me that I have this whole, huge book neatly written inside and burnishing my soul (have a strong hunch that a lot of my community members would have their own personal Kashmirnama buried within their psyche). At the same time, I have been too embarrassed to write it down. Why embarrassed, you might wonder! Read on to find out.

All this while I have hoped that perhaps reading the first person accounts of other people would alleviate the pain that keeps gnawing within me, all the time. I have counted on others to save me from the tumultuous catharsis of putting down my own story. But the Universe has its own way of letting you know that all that you seek is within you, if only you display courage. And so here I am to uninhibitedly share and shed some of the embarrassment that I have unwittingly nurtured. This is my exercise to exorcise some of the ghosts from the past, for, if expressing myself won’t help, what will?

It is outright silly how looking at the picture of a water lily or lotus reminds me of ‘home’ and tends to choke my throat with unshed tears of pain and remembrance. Is that what fuels my insistence upon putting a Lotus in every garland that I offer at one of my favourite places in the world – the Siddhi Vinayak temple? Is my monthly visit to this place a compensation for the near weekly visits to the numerous temples in and around Srinagar as a child – Hari Parbat, Vichar Nag, Tulla Mulla, Shankaracharya?

It is even more childish how the mere glimpse of over-priced ‘nadroos‘ near Santa Cruz West station brings back memories of the elaborate ‘Shukla Paksh Ashtami‘ meals that we would have. Is that why I continue to observe this fast even though I invariably end up explaining to people around me how there are two Ashtamis in every month of the lunar calendar and that Kashmiri Pandit community have a tradition of observing a fast on the one which falls in the fortnight when the moon is waxing? And why am I even mentioning these seemingly frivolous things on such a sombre occasion as KPExodusDay?

Probably, because of the last proverbial straw that broke the back of my camel of memories. The camel that has steadfastly crossed a desert of ignorance, indifference and apathy, from my own countrymen, for more than a quarter of a century.

It was 19th Jan 2016. Almost a month ago, a co-worker innocently and ignorantly (not his fault, of course) asked me as to why was I working in such a far off place and not in my native place. I told him that employment opportunities in Jammu, where my folks stay, are not so bright. And then he asked me about the weather there and I explained that it is extreme just like that in Delhi and he was surprised. This led to even more questions and I had to explain to him the pronounced differences between the two regions (Jammu and Kashmir). This was met with incredulous looks! So I served him with the (probably not too accurate) analogy of subtle differences between Konkan and Vidarbh. That seemed to quell his curiosity but increase my woes!

He now wanted to know as to why I being a Kashmiri Pandit chose not to live in Kashmir, what with its beauty and weather and more! I was petrified, for, only I know how a mere mention of even an inane association with Kashmir can trigger my emotions. In order to cover my embarrassment, I simply stated (a bit too acerbically) that perhaps he ought to read up on the current affairs of his own country, especially, as he handles Learning and Development, no less! And I was saved, just in time, by my fellow co-workers who started sharing some information with him as I left that place.

The very same week, I got to see an old clip of a program conducted ‘allegedly’ by a Journalist which bizarrely and brazenly talked about the Kashmiri Pandit Exodus being triggered by the injustice meted out to the majority community by the well-educated Kashmiri Pandits. Had it not been preposterous, it might have been humorous. I only wished if she would have known about my own cousin not getting admission into MBBS despite qualifying the written exams due to the facade of Viva that was put up as a road block for the minority community. And that in my batch, just one student from our community managed to get through into MBBS!

And today, I saw the then CM’s son and an ex-CM himself tweeting his commiseration to the community, for, he had himself suffered a similar fate (so he claimed). I am thankful to him, for, his blatant hypocrisy has finally propelled me to share my experience through a series of posts, of which, this is the first one.

I shall be writing about all that I have experienced on account of Kashmiri Pandit Exodus, unabashedly, without embarrassment and for as long as it takes, one day at a time, so that we do not forget and are not forgotten. And more importantly, so that as long as I am alive, hope floats – next year in Kashmir, Insha Ganesha!

My late grandmother , who called all displaced Kashmiri Pandits ‘magnets’, mispronouncing ‘migrants’ – the ‘label’ that we are still painted with, even though the ‘Universe’ did not choose it for us, once while consoling the death of a very close relation, asked me to shed all tears and then believe as if he was never born (zan aus na zamutui). From the Kashmir narrative drummed all along by the Media and the Indian nation, at large, it seems as if we were never born there, never were the original inhabitants of the place which has a well-recorded written history. It is as if we simply did not exist – we never were!

How easy has it been for the world to erase us from its collective memory! Nobody mourned the men, women, children (toddlers and even infants) who were brutally massacred by the proponents of peace in the name of establishing Nizam-E-Mustafa. Compare it to the paroxysm of grief ,displayed the world over, on Aylan Kurdi’s unfortunate death and you know what I am talking about! This is not an attempt at whataboutery and I am not here to point fingers. This is about me and my experience which would probably be similar to a lot of my fellow countrymen from the Kashmiri Pandit community.

The chronicle began when I started for Jammu in December 1989 never to go back. I did go back once, I guess, in these 26 years, as a ‘tourist‘, no less! Don’t know if that counts.

Dimple Kaul is a citizen of the free world who believes in living and letting live and loves her nation unabashedly. She does not have a preferred form or style of writing and uses poetry and/or prose based on what she wants to communicate. Some of her works are available at www.dimplehere.com.

An Exercise to Exorcise – Diary of a Kashmiri Pandit, Part 4

Diary of a Kashmiri Pandit Part 3: The Scarring Episode on KP Exodus

Diary of a Kashmiri Pandit: Remembering the Horrors of Pre-planned Ethnic Cleansing in Kashmir