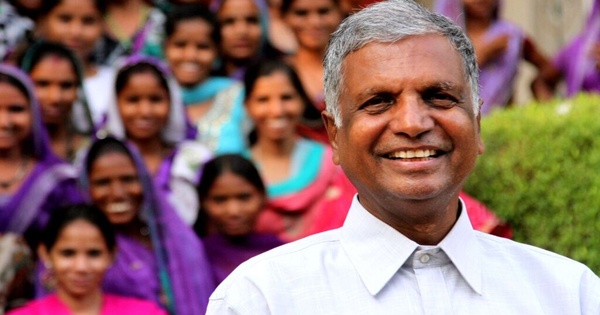 He is the social entrepreneur who revolutionized the very concept of traditional carpet industry in India. Through a community platform that he started – an NGO called Jaipur Rugs Foundation, he enabled economic prosperity among destitute communities. His journey towards facilitating women empowerment in the remotest of villages started with two looms and 9 artisans. Today he has empowered over 40,000 village artisans from across 600 villages in 10 states. He turned these rural artisans into global players, connecting them with buyers from across India and around the world. He promoted the timeless craftsmanship of Indian artisans in carpet making at the international marketplace. He is NK Chaudhary (Nand Kishore Chaudhary).

NK Chaudhary is the founder of Jaipur Rugs, India’s largest manufacturer of hand woven carpets and a multimillion-dollar company. He started this establishment from the scratch at a small town in the northwestern state of Rajasthan in 1978. He has been honored with Udyog Rattan Award 2007, Best SME for CSR 2009, Indian Achievers Award For Business Excellence 2010, India Pride Award 2011, The Times of India Social Impact Award 2012, Business Gaurav SME Awards 2012, NASSCOM’s Social Innovation Honors 2014 award, CNBC TV 18 Emerging India Awards 2014, IndiaMART Leaders of Tomorrow award, The Emory Entrepreneur Awards 2016, America’s Magnificent Carpet Award 2017, and scores of more. NK Chaudhary has been featured in well-known magazines besides making it on the cover of one of the most esteemed magazines, Outlook Business. 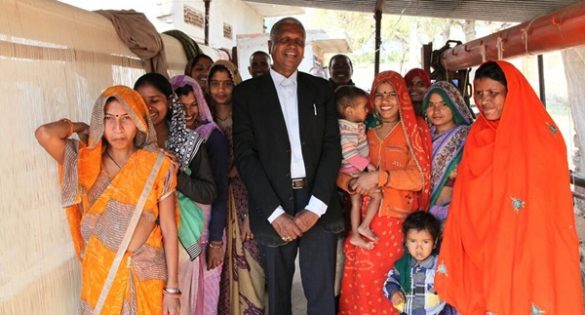 Jaipur Rugs’ unique business model is included as an example of tackling world poverty in late economist C. K. Prahalad’s “The Fortune at the Bottom of the Pyramid.” Renowned institutions such as Harvard University, Stanford University and the Wharton School of Business have also studied the company’s robust supply chain.

Here is an excerpt of an interview with NK Chaudhary on his journey of life and social entrepreneurship, taken by Manoshi Sinha, Editor of My India My Glory online magazine.

Q. How did the idea about empowering rural artisans crop up in your mind? Also tell us about how you started Jaipur Rugs and Jaipur Rugs Foundation.

NK Chaudhary:  It was from a very young age that I was determined to do something meaningful in life. As I observed local weavers in my small town, I fell in love with the process of carpet making. Initially I did a job in a bank. But I wasn’t satisfied. The urge to get connected with the weavers got stronger.

I wanted to create a society where equality, justice and peace prevail through socio-economic development opportunities for all. To serve as a social innovator promoting the cause of artisans by providing them with decent work opportunities and lead them towards their socio-economic well-being was the key objective behind my founding of Jaipur Rugs. My vision was to link our grassroots with global buyers and create shared value for both. I borrowed Rs. 5000 from my father to start the carpet business. For transportation, I banked upon his scooter. It was the year 1978. And since then there was no looking back. 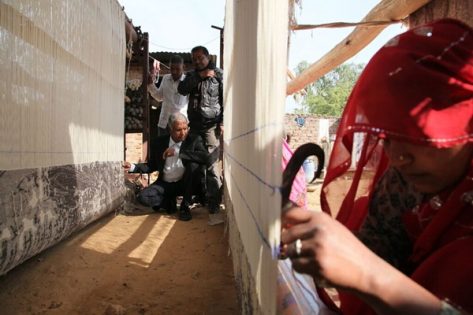 Jaipur Rugs Foundation was founded in the year 2004 to engage communities to develop their creative capacities and sustain them as a part of an entire movement of empowerment. Through our NGO banner, we provide training in carpet weaving, facilitate education, provide health care facilities and endow thousands of rural artisans with developmental training.

Q. What is the uniqueness of your firm Jaipur Rugs in empowering the underprivileged?

NK Chaudhary: We employ men and women who live in the remotest parts of India with little to no access to transport. The greatest challenge in these artisans’ lives is commuting to work and back, often resulting in families that live far apart. One of the key differentiators of the Jaipur Rugs model is an artisan’s ability to not only work from home but have business travel to them. Through the company’s ERP system, the most isolated villages of India are brought  on a digital interface, truly linking the grassroots to global.

Through a grassroots network that requires specialised logistical support, raw material is dropped off at the artisans’ home where they work on the product. To ensure customers receive high quality products, quality supervisors inspect looms to help ensure a consistent output while tracking progress. These supervisors also ensure artisan non-stop service to ensure they are not interrupted by the shortage of yarn or any other such disruptions to earning capacity. When completed, the rugs are picked up from the weavers’ doorsteps and sent on to the next stage of the rug making progress. These visits also ensure that weavers are paid every month at their looms. 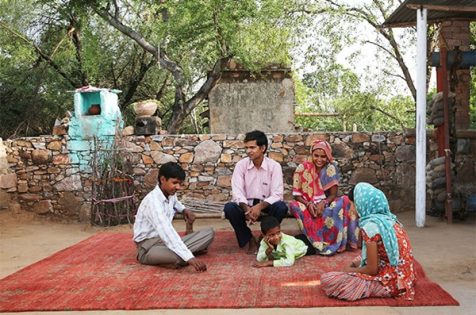 Q. Are women empowered under your social entrepreneurship initiatives?

NK Chaudhary: Most of the artisans we work with are women. They are the invisible segment of the rural population. We enable economic independence to women working at home and help them assert their rights. I feel rug weaving is one of the best sources of livelihood for rural women. It does not demand massive infrastructure. The practice of rug-weaving seeks to keep women away from forced labor and migration by empowering them with economic independence through sustainable livelihoods at their doorsteps.

Q. Your views on craftsmanship in India. How is Jaipur Rugs Foundation involved in keeping the spirit of craftsmanship alive on a big scale?

NK Chaudhary: Over 10 million craftspeople form part of India’s living heritage, practicing unmatched hand skills. Traditional crafts symbolize the cultural identity of human civilization, while each handmade product has an identity of its own. Mechanized mass production is endangering the timeless traditional craft forms by killing human creativity. Consequently, artisan communities are forced to abandon ancient family traditions as they are deemed ‘worthless’.

Our goal at Jaipur Rugs Foundation is to bring positive sustainable change in lives of artisan communities, to provide a life of happiness and dignity. And we have been successfully implementing this.

Q. Your message to readers:

Take the example for our rural women artisans who live in remote corners of rural India. These women weavers have struggled to find a voice for themselves in a patriarchal society and have been meted out with discrimination based on their caste and gender. However, they chose to work towards personal empowerment and when coached by Jaipur Rugs, they decided to work on the doorstep entrepreneurship model and used weaving as a means of advancement and transformation. These women weavers became conscious of their skills and talents rather than the tag of their socio-economic background. With each shot of the Churri (cutting tool used by weavers on the loom), the women severed their dependence on men (sense of freedom). They severed the curse of abject poverty (by learning a new skill and alternate method of earning their livelihood). They severed the superstitions and severed servitude. They managed their time and put in the necessary efforts. These women appear as modern goddesses –the creative goddess whose hands carry the Churri, Panja and Kainchi (weaving tools). 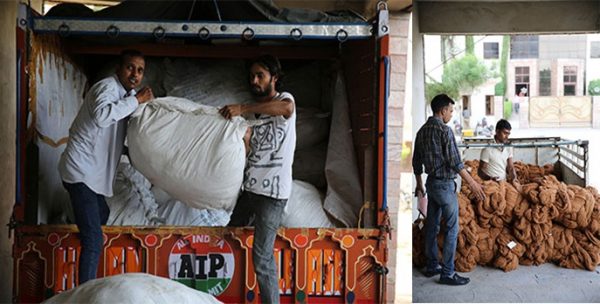 Amongst these women who loomed change and advancement, there lie examples of wonder women like Sajna Ji, who lives in a small village Aaspura, who fought cancer and used weaving as a meditative technique or Bugali who overcame the trauma of physical abuse and domestic violence to not only survive but to impart her experiences to many. For the first time ever, these women were inspired to be designers of their own rugs and they did not shy away from the opportunity. Even without any formal education, they decided to explore their creative potential and became weaver designers. This is real transformation.

Many times I look at the rugs which these rural women weavers make and feel that these inanimate pieces of ‘art for the floor’ not only fill the four corners of a room, they also unite the corners of the world, connecting lives and connecting creativity. These rugs connect the whole community of these creative artisans from 600 villages, to the living spaces of people in more than 45 countries. In this world, immense creative potential exists, just waiting to be explored, waiting to be celebrated. I hope everyone moves towards exploring their true potential as well.

More power to NK Chaudhary and his social initiatives.