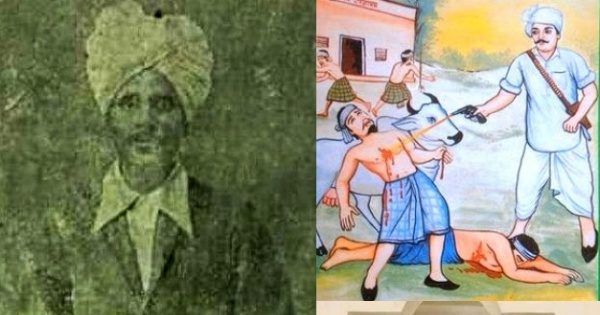 He is gaurakshak and freedom fighter Harphool Jat Julaniwala. He was hanged to death on 27th July 1936 by the British for saving thousands of cows and for killing butchers, destroying slaughterhouses.

Harphool Jat Julaniwala was born in Julani, Jind in Haryana in 1892. Initially he joined the British Army and even participated in World War I. Joining the army was his passion to learn the art of warfare. Noticing increased British oppression of natives of the motherland, he left the Army. While in service he was very brilliant and also once saved the children of a British colonel. Hence, when he asked for a folding gun as an award during retirement, he was granted the same. 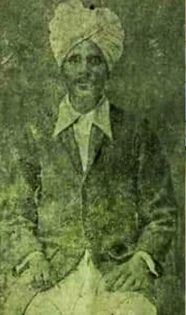 Harphool was a victim of bullying during his childhood. During his young days, he was falsely charged and arrested for a crime he did not commit. He was tortured by a police officer during lock-up in Jind. Now that he had a gun, he decided to take revenge. He had not been in his village for many days while he was posted in the Army. He first went to the police station and shot dead the police officer. He then went home. His mother was already dead. Shocked at the news and unable to bear the grief, Harphool left home and went to the forest. There he met a Sadhu who also reared cows. The Sadhu consoled the grieving Harphool and explained to him how the cow is a mother too. Ever since, Harphool considered the cow his mother and started taking care of them. 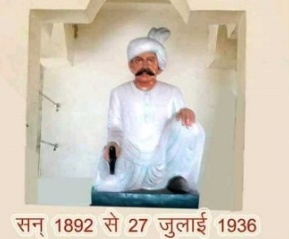 Slaughterhouses were then a common sight in the region where Harphool Jat lived and slaughtering of cows was very common. Harphool started attacking and destroying slaughterhouses and killing the butchers. He released the cows from these sites. He also saved many cows from being smuggled.

During British rule, hundreds and thousands of Hindus and Sikhs revolted against slaughter of cows. The British allowed Muslims to built slaughterhouses across the country. During the 1870s, the Kuka movement gained momentum. Kuka members were mainly Namdhari Sikhs and were gaurakshaks. They were the disciples of Sat Guru Ram Singh. Their key objective was preventing slaughter of cows, saving cows, fight for freedom of the motherland, follow Swadeshi culture including wearing of homespun cotton clothes.

According to the book Kuka Movement: Freedom Struggle in Punjab by Jaswinder Singh, in January 1872, 150 Kukas attacked butchers of Maler Kotla (Sangrur, Punjab). The butchers had the support of the British. The British Police immediately set to action. They arrested 66 Kukas, brought them to Maler Kotla ground and without any trial, executed them with guns and cannons. The execution was ordered by Cowan, the Deputy Commissioner of Ludhiana and Forsyth, the Commissioner of Ambala. Among the martyred freedom fighters and gaurakshaks were three children including 12-year-old gaurakshak Bishan Singh. Cowan, at the request of his wife, had agreed to spare the life of Bishan Singh on one condition that he should deny that he was a disciple of Sat Guru Ram Singh. Bishan Singh was a boy; hence he was shorter in height compared to Cowan. He said that he would reply in whispers in Cowan’s ears. Cowan agreed and he knelt down towards Bishan. What Bishan did took everyone by surprise. As soon as Cowan bent his head, Bishan Singh caught hold of his beard and pulled them hard. The Deputy Commissioner shrieked in pain. He ordered his men to take action against the boy. British police first chopped off Bishan Singh’s hands and then beheaded him. As Bishan Singh’s hand fell lifeless to the ground, Cowan’s beard was seen entangled in his tender fingers. This massacre of Kuka gaurakshaks by the British doesn’t find mention in history textbooks or mainstream narratives. 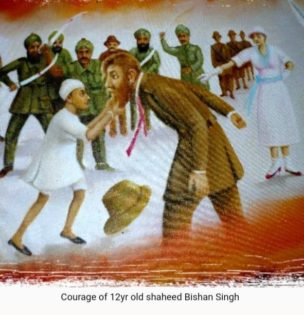 Harphool Jat continued with his gaurakshak activities. Meanwhile, the British started searching for him. But they could not catch him as he remained underground for most of the time. Harphool Jat also saved poor villagers, especially peasants and women from British oppression.

One of his biggest attacks of a butcher house was on 23 July 1930 at village Tohana. Despite continuous opposition from the local Hindus, the butchers did not stop their activities. The Hindus then sought the help of Harphool. What did Harphool do as the butchers were alert about him and were well guarded. Harphool disguised as a woman and entered the butcher house. He not only shot dead several butchers but also freed all the cows trapped there. This brave act earned him the title of Sawa Sher (meaning strength and aura like a 100 lions) from local Hindus. 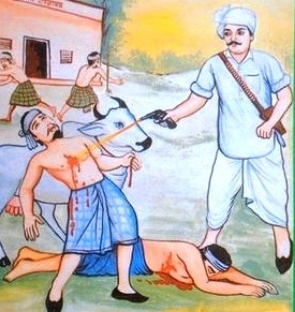 Harphool Jat continued attacking many slaughterhouses in several districts of Haryana and released cows. Meanwhile, the British, unable to catch him, announced an award for his arrest. India has a legacy of traitorhood wherein traitors led to her confinement in chains in the hands of foreign invaders and her downfall. A traitor from Pacheri informed the British about Harphool’s whereabouts and he was arrested at night while in sleep. He was lodged at Firozpur jail. The British hanged him to death in this jail. It was 27th July 1936.

Naman to all freedom fighters and gaurakshaks who fought for Dharma and motherland.

This story of Harphool Jat is based on several historical accounts, local folklore of Haryana, and oral narration by Adv Manoj Mor.