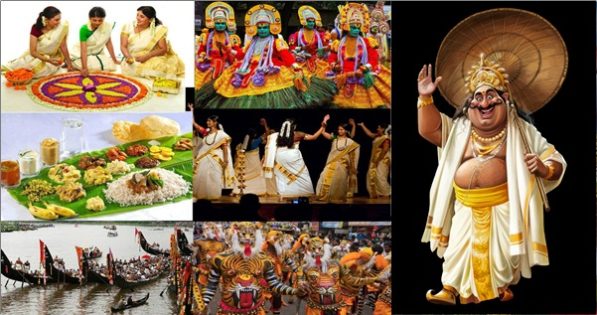 The Onam festival  is the most popular festival of Kerala. This festival is celebrated when Sun is in Simha Rashi. Onam begins with Hasta Nakshatra and ends with Sravana nakshatra. It has been celebrated since last 11,100 years in Kerala in the honor of the beloved King Mahabali who was a just ruler and beloved of his subjects, the time when only the Hindus and followers of Sanatana Dharma existed in this land called Jambudwipa. Then abusive and selective amnesia ridden abuser of Hindus mainly the Communists, Secular and Abhramaic religions both Christianity or Islam did not even exist in either thought or in word.

Sangam literature informs us that the great Pandyan king Nedunchelian (1850-1800 BCE) celebrated Onam or Thiruonam festival. According to legends, this festival is celebrated in the memory of King Mahabali who promised to return to Kerala every year. In all probability, the Vamana-Mahabali anecdote belongs to the era prior to the arrival of Parashurama in North Kerala. 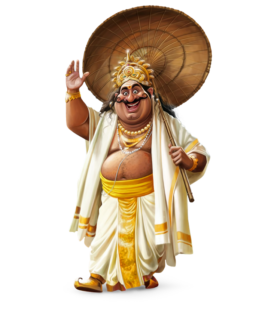 Mahabali  ruled in approx. 11,160 BCE [as per textual / astronomical evidences] in the Lands now called as Kerala. There are many versions of this legend in ancient texts such as the Shatapatha Brahmana, Ramayana, Mahabharata and Puranas. His legend is also a part of the annual Balipratipada (fourth day of Diwali) festival in the States of Gujarat, Maharashtra, Karnataka and Onam festival in the state of Kerala, India.

Mahabali belonged to the ‘KASHYAPA’ Gotra which is originally one of the eight primary gotras (clans) of the Brahmins, being derived from Kashyapa, from whom the eponymous gotra Brahmins believe to have descended. They are (1) Gautama Maharishi, (2) Bharadwaja, (3) Vishvamitra, (4) Jamadagni, (5) Vashista, (6) Kashyapa and (7) Atri . To this list, (8) Agastya is also often added. These eight sages are called gotrakarins, from whom all 49 gotras (especially of the Brahmins) have evolved, and every Brahmin anywhere in the world will trace his ancestry to this 8 groups.

Hindu history has been peppered with  magical stories for the simple reason that the knowledge of texts and books were confined to learned class VARNA and the major population being illiterate were not privy to factual dates and therefore the magical element helped the general populace to understand, retain and relate their social identity to the legend. It was the VARNA system that flourished then which is not a caste system as propagated by Hindu haters of now (unfortunately whose ancestors were Hindus and would be ashamed of them if they were alive).

Mahabali is described in Puranic History as a benevolent and generous king, but violent and surrounded by asura associates who abused power. They particularly persecuted the suras and the Brahmins. Hiranyakashipu  was son of the famed Rishi Kashyapa and Diti, Prahlada the son of Hiranyakashipu and Kayadhu, and his wife gave birth to son was who was called Virochana. Virochana was father of Mahabali, and Mahabali was crowned king and known as a just ruler and beloved of his subjects. As they were born of male lineage of the famous Rishi Kashyapa their gotra was named ‘KASHYAPA’ Gotra. As known to all, the Gotras were defined specifically to allow genetically disease / retardation superior genes to be propagated through male lineage.

Mahabali also temporarily possessed the amrutam (nectar for eternal life) obtained by the asuras by trickery. The amrutam allowed his associates to bring him back to life after his death in one of the wars between suras and asuras.  Mahabali was, thus, immune from death. After many wars, the invincible Bali had won the heaven and earth. The suras (Devas) approach Vishnu to save them. Vishnu refused to join the war or kill his own devotee Mahabali. He used a tactical approach instead and incarnated as the dwarf Brahmin avatar, Vamana. While Mahabali was performing Ashvamedha Vedic yajna to celebrate his victories and giving away gifts to everyone, Vamana approached him and asked for “three steps of land”.

Mahabali granted him the gift. Vamana then revealed into Vishnu’s giant Trivikrama form, taking all of heaven in one step and earth in second. Mahabali realized that the Vamana was none other than Vishnu and offered his own head for the third step. Some Hindu texts state that Mahabali became the king of Sutala (a world more beautiful than Swarga, where Vishnu himself attended to Mahabali), some state he entered heaven with the touch of Vishnu, while another version states he became chiranjivi (immortal).

According to Hindu texts, Vishnu granted Bali a boon whereby he could return to earth every year. The harvest festivals of Balipratipada and Onam are celebrated to mark his yearly homecoming. Literature and inscriptions in Hindu temples suggest that these festivals, featuring colorful decorations, lighted lamps, gift giving, feasts and community events, have been popular in India for more than a twelve thousand years or so.

Though the ONAM is celebrated now in CHINGYAM masam it was previously celebrated in SHRAVANA masam or Karkidakam in Malayalam.  The chronological history of Asuras might have commenced around 14300 BCE. Considering the position of summer solstice at Dhanistha Nakshatra, Brahma and his son Svayambhuva Manu flourished around 14500-14400 BCE. Ketumala was the great grandson of Svayambhuva Manu.

King Mahabali, the grandson of Prahlada also flourished around 11150-11100 BCE. He also belonged to the tradition of Asuras. Therefore, Kerala used to celebrate the arrival of New Year from spring season. During 11150 BCE, spring season commenced when sun was in Simha Rashi. This is the reason why Onam festival is celebrated in the solar month of Chingham.

The word “Onam” is derived from Shronam i.e. Sravana. The month of Sravana was the first month of spring season around 11150 BCE. Thus, Sravana Utsav came to be known as Onam.  The Onam festival is celebrated for 13 days from Hasta nakshatra to Shatabhishaj nakshatra. Seemingly, Onam festival had commenced when Abhijit was still existed in the list of nakshatras.

Next we shall reveal how the PARSIS are connected to the dynasty of ASURAS .. and how they celebrated their NAVROZ FESTIVAL and how it is connected to Hindu beliefs … in another posting.