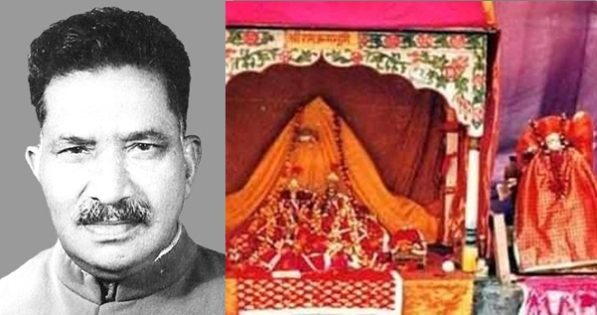 It was the night of December 22, 1949. After centuries of wait, Hindus reclaimed, though not legally, the Ram Janambhoomi site by installing Moorti s of deities including of Shri Ram under the main dome. In 1528-29, Mughal Commander Mir Baqi following the orders of Babur, built the Babri Masjid at this site – a hill called Ramkot (Rama’s Fort). The site originally hosted a temple. The Mughal army vandalised the site and built the mosque at its place. Alf Hiltebeitel’s book Rethinking India’s Oral and Classical Epics: Draupadi among Rajputs, Muslims, and Dalits finds mention of Ramkot as Rama’s Fort – the central site of Ram Janambhoomi, the sacred land of Rama’s birth and about this place being discovered by Raja Vikramaditya. Reclamation ‘of the Babri Masjid by the Hindus had started after 1855 and the incident of 1949 was an extension of it’ writes Sushil Srivastava in ‘The Abuse of History: A Study of the White Papers on Ayodhya’published in Social Scientist journal.

Despite the site being protected by police, the Hindus emerged successful. On the morning of December 23, i.e the next day, Hindus in large numbers gathered in front of the site to have a glimpse of the Moorti. As the gate was locked they could not enter. Police force strengthened in numbers. To quote from Sushil Srivastava’s ‘The Abuse of History: A Study of the White Papers on Ayodhya’, Nehru, “the then prime minister of India was greatly disturbed with the developments in Ayodhya. When Jawaharlal Nehru heard that the idols had been surreptitiously placed inside the mosque, he immediately asked the chief minister of U.P. to intervene and get the idols removed.” Here is an extract:

Following Nehru’s intervention, the chief secretary of Uttar Pradesh and the inspector-general of police ordered KK Nayar, the then district magistrate posted at Faizabad (Ayodhya was under his jurisdiction). KK Nayar refused to remove the idols. Here is an extract from ‘Ayodhya And Somnath: Eternal Shrines, Contested Histores’ by Peter Van Der Veer, Social Research:

“I could, if the government decided to remove the idols at any cost, request that I be relieved and replaced by an officer who may be able to see in that solution a merit which I cannot discern. For my part I cannot in my discretion, which is the only legal sanction behind my action in this matter, essay to enforce such a solution as I am fully aware of the widespread suffering which it will entail to many innocent lives.”

KK Nayar, an ICS, served in Uttar Pradesh in various capacities since 1930.  The way he dealt with the issue and his stand of not removing the Moortis from the Ram janambhoomi site, now reclaimed, made him a hero. This is described in D Smith’s ‘Religion and Politics in a UP Constituency,’ in South Asian Polities and Religion.

What happened after KK Nayar did not follow govt orders? The divisional commissioner supported Nayar’s view. They both proposed to keep the Ram Janambhoomi site under strict police control. The divisional commissioner in addition allowed a pujari to perform puja of the deities. Thereafter, every December 22 every year, a committee of Hindus of Ayodhya was allowed to enter the temple and perform puja rituals.

Did Nehru keep quiet after this? No! In response to KK Nayar not following his orders, Nehru wrote a letter to Kailas Nath Katju, then Home Minister, describing the incident and asking him to deal with his case. The letter was dated January 22, 1952. Kailas Nath Katju, who was elected from Mandsaur constituency to the Lok Sabha was first the Law Minister in 1951 followed by his role as the Home Minister the same year in November.

This letter by Nehru addressed to Kailas Nath Katju includes the following points:

4. That Nayar’s actions made him very angry

5. That he had asked Govind Ballabh Pant, the then CM of Uttar Pradesh to take strong action against Nayar

6. That the matter, instead of being tried in a court of law was preferred for a departmental enquiry, and the case then transferred to the Home Ministry

7. That Nayar was not tried publicly

8. Nehru through the letter requests the Home Ministry to speed up the process

9. That why KK Nayar has been dealt with so leniently.

I suppose you know about the Ayodhya Mosque affair. The district magistrate of the place, Nayar, behaved very badly, disobeyed his Government’s orders and generally created a difficult situation. This made me very angry at the time and I asked Pantji to take strong action against him.

Subsequently I heard that Nayar was involved in some other undesirable transactions affecting him personally. The U.P. Government wanted to proceed against him in a court of law but for some reason, which I have been unable to understand, our Home Ministry was against this and preferred some kind of a departmental enquiry. A High Court Judge was asked to undertake this. This particular Judge fell ill and there the matter stands. Apparently the U.P. Government has referred the matter to your Ministry and suggested some other High Court Judge’s name.

I think it is a great pity that this man, Nayar, was not tried publicly as he is altogether a bad hat. I suppose it is not easy to go back on the decision taken, more especially as his wife is now standing as a Hindu Mahasabha candidate in the elections. 4 Anyhow, I should like this matter to be expedited by your Ministry. I should also like to know why he has been dealt with so leniently. There has been much comment on this. 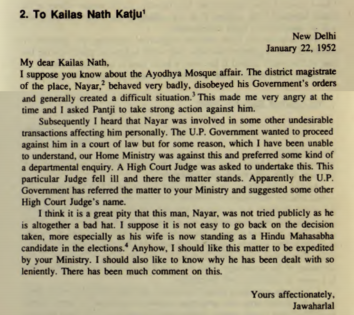 KK Nayar voluntarily retired from his  service in 1952. Thereafter he started practicing law at Allahabad High Court. KK Nayar later entered politics and elected as member of U.P. Legislative Assembly in 1965-67 and of Lok Sabha in 1967-71.

The fight for reclaiming of Ram Janambhoomi shrine continued for centuries. In 1853 two groups of Hindus and Muslims clashed over site of worship. On January 29, 1885 the first lawsuit was filed by Raghubar Das, the Mahant of Ram Janambhoomi against the Secretary of State for India in Council to build a temple at the Ram Chabutara spot. A series of more lawsuits were filed thereafter. After independence of India, the first lawsuit was filed after 1949. Nirmohi Akhara, in the year 1959, claimed the disputed site also by filing a lawsuit. And then the series of ‘tarikh par tarikh‘ by the Supreme Court!

According to KK Muhammad, who was part of the excavation team of the Ram Janambhoomi site, it was the temple of Shri Ram that existed there, proven by inscriptions. KK Mohammed extensively surveyed Ayodhya in 1978 as an archaeology student as a member of a team headed by Prof BB Lal. His findings and more findings of temple remnants under Babri Masjid during excavations strengthened the Ayodhya case. Padmashree Meenakshi Jain’s research books Rama and Ayodhya and The Battle for Rama on the Ram Janambhoomi site further reinforced the findings.

After a 40-day hearing, on November 9, 2019, the Constitution Bench of the Supreme Court of India awarded the entire disputed area in Ayodhya to the Hindus. The verdict included offering of an alternative land of 5 acres in Ayodhya to the Sunni Central Waqf Board for the construction of a mosque.

Bhoomi Pujan of Shri Ram Janambhoomi temple successfully concluded on 5th August 2020 by PM Modi. The wait for this occasion since 1528, wherein thousands and lakhs of our ancestors sacrificed their lives to reclaim what belonged to us, is now over. We also learn a lesson from this centuries-long struggle for what belonged to us – ‘United we stand, divided we fall’, that ‘however difficult and long the struggle is, we ultimately win if we continue fighting for it’.

The journey of reclaiming our temples should continue unabated….