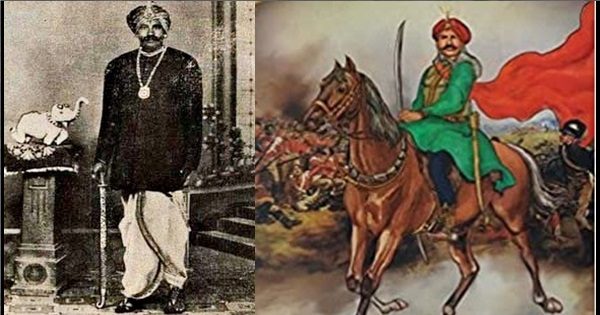 Uyyalawada Narasimha Reddy! He was one of the earliest freedom fighters who challenged British supremacy. He led a war and several skirmishes against the British. He led over 5000 farmers against the ryotwari system in particular introduced by the East India Company and against heavy taxation policy in general. U Narasimha Reddy was supported by Vadde Obanna who he appointed commander-in-chief. For his brave act, Reddy was hanged in public by the British.

Born in a Telugu family related to Nayakars in Rupanagudi village, Kurnool in the Rayalaseema region,  Uyyalawada Narasimha Reddy hated the British since his childhood. Farmers in his region led a comfortable life and earned revenue from their crop yields. The British started looting them in the name of taxes that soon resulted in the latter’s impoverishment. Besides, the British also appropriated land rights of many not only in that region but also across the country.

Rayalaseema region, the hub where Uyyalawada Narasimha Reddy gave shape to a war and a number of skirmishes against the British, was then under Madras Presidency. It started in July 1846. What was the immediate cause of the revolt? By this time, ryotwari, a land revenue system introduced by the British, had already taken a toll on the life and livelihood of farmers in not only Rayalaseema but also other parts of India. Ryotwari system was first administered in the Baramahal area of Mysore by British Captain Alexander Read. It was then  introduced by Thomas Munro, the Governor of Madras Presidency, in 1820.

The British had introduced three key land revenue collection systems pertaining to farmers – Zaminidari, Ryotwari and Mahalwari. The ryotwari system, which also included features implemented by the Mughals, was applicable to farmers – the cultivators of agricultural land. The land revenue was imposed directly on the farmers, termed ryots.

To quote RC Dutt from The Economic History of India Under Early British Rule. Vol. I: From the Rise of the British Power in 1757 to the Accession of Queen Victoria in 1837 published in 1902, “The land-tax assessed on each holding is fixed at the discretion of revenue officers at each recurring settlement. The Madras Ryot has no fixity of rental, no security against enhancements, no adequate motive for improvements. The uncertainty of the land-tax hangs like the sword of Damocles on his head.” After the east India Company was abolished and colonial rule in India taken over by the British crown, the farmers were made to pay half a share ‘of the rent as Land Tax’, which ‘is a very high rate’. ‘In practice, even this high limit is exceeded; and what is realised as Land Tax in Madras often sweeps away the whole of the economic rent.’ 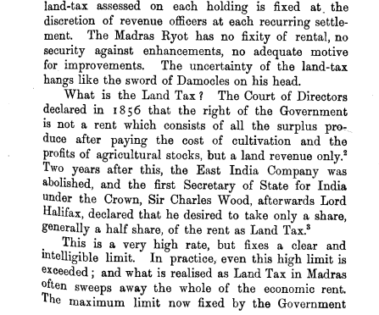 Extract from RC Dutt’s ‘The Economic History of India Under Early British Rule. Vol. I: From the Rise of the British Power in 1757 to the Accession of Queen Victoria in 1837′

The ryot tax was levied based on the soil potential, not on produce. As there was no fixed revenue, at times the farmers were forced to pay more than 50 percent of the gross revenue. Thomas Munro gradually reduced the revenue from the rate of taxation from one half to one third of the gross produce. But even the collection of one-third revenue by British affected the farmers. RC Dutt in The Economic History of India Under Early British Rule. Vol. I: From the Rise of the British Power in 1757 to the Accession of Queen Victoria in 1837 quotes and describes an account by Bishop Heber on the land revenue system implemented by the British. Heber toured the country and interviewed the people in different provinces which he compiled in the form of a journal book and private letters.

To quote RC Dutt on Heber’s feedback, “What created the saddest impression on him was the poverty of the people, and the heavy Land Tax which was levied by the East India Company in their dominions.”

Extract from RC Dutt’s ‘The Economic History of India Under Early British Rule. Vol. I: From the Rise of the British Power in 1757 to the Accession of Queen Victoria in 1837’

Besides, the ryotwari system implemented by British directed at maximizing revenue not only affected farmers, leaving them impoverished but also deprived landholders of their land rights and as revenue collectors. Many polygars in the region were deprived of their authoritative positions and possessions and awarded paltry pensions. Polygars who revolted against British were denied pension. The polygar concept was introduced by Viswanatha Nayaka in the 16th century wherein he organized the quasi-feudal organization of polygars into 72 palayams or provinces with each palayam ruled by a chieftain, also termed palaiyakkarar or polygar. The polygars were entrusted with the role to administer their respective territories, collect taxes, run the local judiciary, and maintain an army for the Nayaka rulers. Each polygar was also entrusted to control one of the 72 strongholds of the Madurai fortifications. The pension awarded to the polygar family of Uyyalawada Narasimha Reddy was very paltry. Reddy was a polygar of Uyyalavada in Koilkuntla taluk.

Narahari Venkatakrishnamaiah Chetty in The Manual of Kurnool District in the Presidency of Madras (Pages 41-42), describes about Uyyalawada Narasimha Reddy thus as reported by The East India Company in their district manual of 1886, “Since 1839 nothing of political importance has occurred, unless we mention the disturbance in 1847 caused by Narasimha Reddy, a pensioned Poligar of Uyyalavada in Koilkuntla Taluk, then part of Cuddapah district. He was in receipt of a pension of Rs. 11 a month. As a grandson of Jayaram Reddy, the last powerful Zamindar of Nossam, he was sorely disappointed when the Government refused to pay him any portion of the lapsed pension of that family. Just before this time the question of resuming Kattubadi Inams has been brought under the consideration of Government, which made the Kattubadis discontented. Narasimha Reddy collected these men and attacked the Koilkuntla treasury. He moved from place to place and sheltered himself in thepi hill forts of the Erramalas and Nallamalas, and though pursued by troops from Cuddapah and Kurnool, he continued to commit his ravages in Koilkuntla and Cumbum. At Giddalur he gave battle to Lieutenant Watson and killed the Tahsildar of Cumbum. He then escaped into the Nallamalas, and after roving about the hills for several months was caught near Perusomala on a hill in Koilkuntla taluk and hanged. His head kept hung in the fort on the gibbet till 1877, when the scaffold falling into decay.” 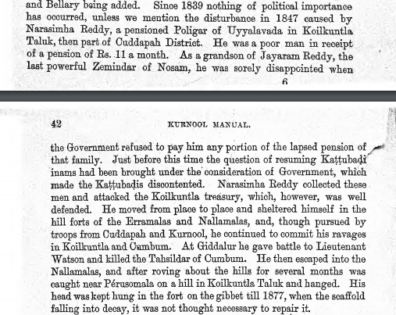 U Narasimha Reddy with Vadde Obanna and their group of farmers killed many Britishers. They attacked British posts and reclaimed part of the treasury (which the British looted from Indians). This was followed by a battle against the British near Kotakota and more regions over a period of few months.

This is how freedom fighters in each and every part of India challenged British rule from the very beginning, which ultimately forced them to leave India. This is how many freedom fighters sacrificed their lives over a period of time for the freedom we enjoy today.

Except in few areas in the south of India, many of us hardly know about Uyyalawada Narasimha Reddy, whose valor and sacrifice is not acknowledged in our national history textbooks. I have not read about him in school. K. Venugopal Reddy provides a detailed account on Uyyalawada Narasimha Reddy and freedom fighters involved with him in his piece published in the journal Social Scientist. Few books books including A Manual of The Kurnool District in the Presidency of Madras by Narahari Gopalakristnamah Chetty glorify the freedom fighter.

My naman to Uyyalawada Narasimha Reddy and all freedom fighters involved in the series of battles and skirmishes against the British.

1. A Manual of The Kurnool District in the Presidency of Madras by Narahari Gopalakristnamah Chetty.

2. The Economic History of India Under Early British Rule. Vol. I: From the Rise of the British Power in 1757 to the Accession of Queen Victoria in 1837 by RC Dutt.

3. “Dominance and Resistance: A Study of Narasimha Reddy’s Revolt in Andhra against the injustice and towards India’s freedom movement (1846–47)” by K. Venugopal Reddy in Social Scientist.

A Tribute to Priyanka Reddy

How Agritech can be a Solution to Farmers’ Produce-related Woes