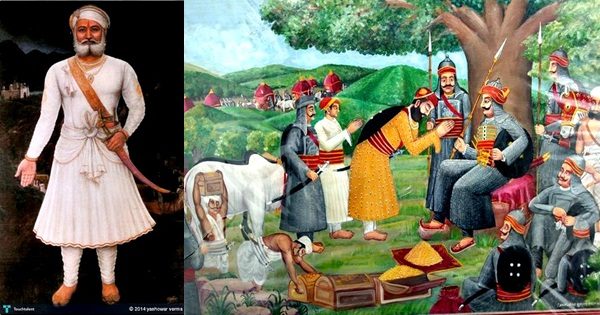 The Battle of Haldighati of 1576 between Maharana Pratap of Mewar and Akbar’s Mughal forces was a stalemate. Neither party won. One of the most memorable scenes (depicted in many old art works and made immortal by bards and poets) from this battle that froze the blood in the veins of the onlookers was Maharana Pratap vertically cutting Mughal commander Behlol Khan into two pieces along with his helmet, armour and even his horse! Many historians have distorted this battle story to show Akbar’s victory and this distorted version is portrayed in history textbooks. Rana Pratap involved in war with Mughals few months later and regained most of the Mewari territory. This could happen because of Rana’s firm determination to regain the territories of his kingdom and because of wealth donated by Bhama Shah.

Who was Bhama Shah? Not many of us, except from Rajasthan, know about this brave general, trader, minister and adviser of the royal court of Mewar. Many are driven by the notion that Jains strictly follow the tenets of non-violence. But when it comes to Raj Dharma, of defending the motherland, they have been at the forefront. Bhama Shah was a Jain, but he not only donated almost all his wealth but also led the Mewari army to battlefields and helped restore Mewari territory from the Mughals. Bhama Shah’s younger brother Tarachand was also a minister and warrior in the Mewari army and administration. He also led several Mewari battles to victory. He was generous and loyal like his brother. He too donated maximum of his wealth to Maharana Pratap to maintain the Mewari army and regain lost territories. Even after donating their wealth, both Bhama Shah and Tarachand intruded into Mughal territories, defeated the Mughal armies, and brought wealth from those regions, which were then used for maintaining the Mewari army, especially after the battle of Haldighati when Maharana Pratap was exhausted of resources. Here is a proverb from the Manusmriti:

The meaning of the above shloka is:

Dharma destroys those who destroy it, Dharma protects those who protect it.
Dharma does not destroy and cannot be destroyed.

In short, the essence and meaning of this shloka is ‘Dharma protects the protector’, which holds true for Bhama Shah and Tarachand including all the protectors of Dharma.

Bhama Shah was born in the year 1542 in an Oswal Jain family. He belonged to the Kavadia gotra. His father Bharmal Kavadia worked under Rana Sanga (grandfather of Maharana Pratap) as Qiledar of Ranthambore Fort and then as Prime Minister under Maharana Udai Singh (father of Rana Pratap). Tarachand was Bhama Shah’s only brother, younger to him by four years.

Bhama Shah and his brother Tarachand got trained in the art of warfare as they grew up. He soon rose to the position of a general. Besides, undertaking military responsibilities of the Mewari kingdom, Bhama Shah was in charge of administrative responsibilities as a minister in the court of Maharana Pratap. Additionally, he looked after the treasury, was an adviser and close aide of the Maharana. Tarachand was also a commander of the Mewari army.

Akbar always looked opportunities to use Indians against Indians in battle to create further divisions between them. While most kingdoms surrendered to his supremacy and became vassal rulers, Maharana Pratap neither recognized Mughal supremacy nor agreed for any meetings or alliances. Akbar decided to use Rajputs against Rajputs. To quote from Saffron Swords, Akbar “sent Man Singh as his emissary to Mewar. He wanted Rana Pratap to acknowledge him as the emperor and wanted Pratap to be his vassal, just like Man Singh. Maharana Pratap did not pay heed to any of the logics and schemes put forward by Man Singh. The mission failed; then something happened which brought war to the gates of Mewar even earlier than predicted”.

“During his stay in Mewar, Man Singh was invited to a royal dinner. Maharana Pratap refused to join him on the pretext that kings dine only with kings and Man Singh was just a crown prince and that too, of a vassal state of the Mughals. Pratap sent his son Amar Singh for the dinner. Man Singh considered this to be an insult and left. He started advising Akbar to attack and depose Maharana and capture Mewar. Akbar was already looking for a moment like this. He quickly ordered an attack on Maharana Pratap. Akbar himself did not lead the army. He entrusted the task to Syed Hashim of Barrha along with his brothers and Man Singh.”

It was the year 1576. In the Mughal Army, Man Singh himself was a commander ranking 5000 horse and other ancillaries. Syed Hashim was another commander matching him in stature. Mughal army was also supplemented by the Kachchwaha forces. Rao Lunkaran of Sambhar brought his Rajputs to the Mughal fold too. Gazi Khan of central Asian provinces joined Akbar. And the kinsmen of famous Salim Chishti of Fatehpur Sikri were also there present with their followers.

Rana Pratap organised his army with himself commanding the centre. Bhama Shah and his brother Tara Chand were in the right flank. In the battle that ensued, a river of blood flowed soon after. Ultimately, the battle turned out to be stalemate with neither party winning. A wounded Chetak, Maharana Pratap’s horse, took his master to the hills facilitated by Jhala Man Singh and succumbed to injuries. Gogunda, Kumbhalagarh, Udaipur, and more Mewari territories fell in the hands of Akbar.

Maharana Pratap with his army stayed in hiding in the jungles. In a few months, the Mewari Raja used Guerrilla warfare techniques and regained parts of the Mewari territory. But the Maharana was exhausted of resources, which proved a deterrent in maintaining, arranging, and expanding his army for further bigger battles. Meanwhile, during this time Bhama Shah and his brother Tarachand intruded into the Mughal territories of the Malwa region and looted Mughal treasury.

Had Bhama Shah been selfish and greedy, he would not have donated his wealth. And Tarachand always followed his brother’s footsteps in loyalty, generosity, and duties towards the motherland. Furthermore, Bhama Shah and Tarachand, if they wished, would have kept the looted Mughal wealth for themselves. Few historians have drawn critical conclusions that Bhama Shah did not donate his wealth but only the looted amount. And few more historians are of the opinion that he looted villages which were under the dominion of a Hindu king Rao Durga of Ram Pura of the Malwa region, which is again completely false and baseless. Bhama Shah and Tarachand looted only those regions of Malwa that were under Mughal rule of Akbar. Another group of historians are of the opinion that as Bhama Shah looked after the Mewari assets, he only gave to Maharan Pratap wealth from the Mewar royal treasury. But there are no evidences that Bhama Shah gave Maharana Pratap the royal treasury as the king was already depleted of resources.

Bhama Shah and Tarachand attacked more Mughal camps and brought in more looted wealth which they again donated to Maharana Pratap for maintaining and adding to the strength of the Mewari army so that all the Mewari territories from Mughals could be regained. An overwhelmed Mahara Pratap promoted Bhama Shah to the post of the Prime Minister and appointed Tarachand as Governor of Godwad region. Tarachand was also bestowed the title of ‘Thakur’.

The wealth donated by Bhama Shah and Tarachand helped Maharana Pratap arrange a huge army. At the same time he became free from financial stress. Maharana Pratap then launched an attack against Sultan Khan of the Mughals at Debar (also called Dewar) near Kumbhalgarh. Amar Singh, son of Maharana Pratap, killed the Mughal commander in a single combat.  The Mewari army emerged victorious. The Mughals were driven out from the Dewar region. Gradually Maharana Pratap regained most of the Mewari territory from the Mughals.

Bhama Shah also served under Maharana Amar Singh as in-charge of Mewar’s treasury. He breathed his last in 1600. Naman to Bhamah Shah and Tarachand for their commitment for the cause of the motherland!

3. Maharana Pratap and His Times by Gopi Nath Sharma and MN Mathur.