Hadi Rani of Mewar: Gifted Head to Husband to Motivate Him to Go to War 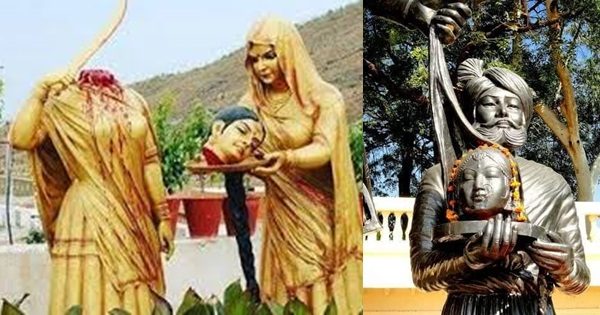 Hadi Rani! She is a familiar name in Mewar in particular and Rajasthan in general but unknown to the rest of India. Mewar, the south-central region of Rajasthan, was home to few of the most chivalrous Rajput warriors of medieval India – Rana Sanga who defeated Delhi Sultan in Battle of Khatoli, Rana Pratap who regained most of the Mewari territory from Akbar, Amar Singh who defeated Mughal forces of Jahangir in the Battle of Dewar and the list goes on. Hadi Rani was the wife of Rao Ratan Singh, a Chundawat chieftain of Salumber (now a municipality in Udaipur) in Mewar. Rao Ratan Singh served as a commander in the Mewari army of  Maharana Raj Singh I. During this time Aurangzeb was the Mughal ruler.

Few books and many web write-ups on Hadi Rani deem her as a folk heroine, and her story, a folk tale, which is wrong. If the term ‘folklore’ or ‘folktale’ is to be used, a prefix ‘historical’ should be added. Historical folklore or historical folktale are real stories that rarely find description or mention in historical accounts. These historical stories stay alive as oral narrations passed down from one generation to another. The chivalrous story of Hadi Rani is real and is part of a historical chronicle.

The book Kshatrya Rajput Caste by T Bahadar Singh describes Chundawat Sisodias as descendants of Chunda, the first son of Lakha, further divided into ten branches. Lakha ruled Mewar in early 15th century. To quote Srinidhi, “Chunda became the Rawat of Salumber and established the Chundawat dynasty. The Rawats of Salumber continued to play a very important role in the state affairs of Mewar…. Chundawat chieftains of the 16th century  laid down their lives fighting the invaders”. Chundawat chieftain Rao Ratan Singh thus carried a legacy of chivalry and valor.

Hadi Rani was the daughter of a Hada Chauhan Rajput, who was the chieftain of Bundi, a region bounded on the west by Mewar. According to an account described in the book The Rajputs of Rajputana: A Glimpse of Medieval Rajasthan by VP Malik and MS Naravane, the Hada Chauhans were descendants of Anuraj, ruler of Hansi (parts of modern Haryana), who defeated Subuktugin – father of Mahmud of Ghazni who plundered India 17 times. Their ancestors also served in the army of Prithviraj Chauhan. Hadi Rani, thus, carried a legacy of chivalry and heroism too.

Indian Poetry: Modernism and After: a Seminar by Saccidanandan finds mention of Hadi Rani in a description about Rajasthani poetry and how poets chose subjects that were ‘already popular with the masses’. That was how poets resorted to composing historical poetry, drawing popular characters from History. This book cites example of how poet Meghraj Mukul composed a historical poem titled ‘Sainani’ on Hadi Rani and rose to fame. To quote from Saccidanandan, “Meghraj Mukul, who earned immense popularity among the masses through the recitation of his poem Sainani’. Mukul had based this poem on the famous story of Hadi Rani who is believed to have cut her head and sent it to her husband who was leaving for a battle and who had asked her for a Satnani, a token of her memory.” Here is an extract: 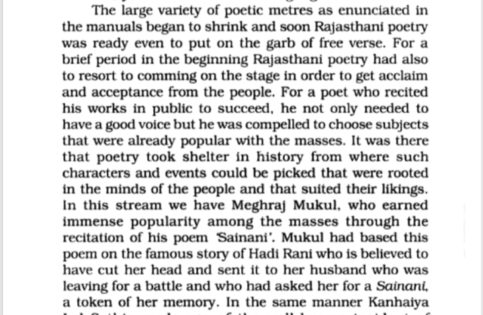 From ‘Indian Poetry: Modernism and After : a Seminar’ by Saccidanandan

For kings, commanders and soldiers, motherland always came first. Ever since antiquity, there has been thousands of examples of how warriors left for the battlefield irrespective of what personal situations they were in. The beautiful Hadi Rani and Rao Ratan Singh were newly married. It was only a day past their marriage when Maharana Raj Singh I sent a messenger to Rao Ratan Singh, ordering him to join a battle against Aurangzeb’s Mughal forces. This dampened the Chundawat chieftain’s spirits, as he was in no mood to leave his wife and go to the battlefield.

What led to war between Maharana Raj Singh I and Aurangzeb? Folk Tales of Rajasthan by Dina Nath Dube presents a detailed account on Hadi Rani. During this time when the marriage between the Hada Chauhan princess and Chundawat chieftain took place, Prabhavati, the Rajput princess of Roop Nagar sent word to Maharana Raj Singh I seeking help. Mughal rulers, since the time of Babur, married several times. Whenever they heard about beautiful princesses, they entered into marriage alliances or forcefully married them. Rulers of several kingdoms were allowed rulership against certain terms and conditions including marriage. Aurangzeb entered into a marriage alliance with the Rajput ruler of Roop Nagar. Despite her father’s request, Prabhavati refused to marry Aurangzeb. Instead she expressed her interest to marry Maharana Raj Singh I of Mewar. Prabhavati was known far and wide for her beauty. Aurangzeb marched towards Roop Nagar with a huge army to marry Prabhavati. Maharana Raj Singh I had left for Roop Nagar too, ready to marry Prabhavati before Aurangzeb’s arrival. It was the honeymoon night for the newly married Hadi Rani and Rao Ratan Singh when a lady messenger knocked at their door and delivered the urgent message from the king of Mewar, ordering the groom to rush towards the approaching Mughal army of Aurangzeb, commandeered by General Dilawar Khan and check their advancement.

Hadi Rani overheard the conversation between the messenger and Rao Ratan Singh in bits and parts. When the messenger left, waiting outside to receive the reply from the commander, she asked her husband about the matter. A worried Hadi Rani soon cheered up. As she grew up, her mother had narrated to her many tales of Rajput valor. She has also heard how valorous her ancestors were. Hence, she would not let her husband get distracted only because they were newly married. She immediately asked him to leave for the battlefield. But Rao Ratan Singh hesitated.

The chivalrous Hadi Rani herself took a decision. She sent word to the messenger that Rao Ratan Singh would immediately leave with the Mewari army to check the Mughal forces. An aggrieved and frustrated Singh caught hold of his bride by her shoulders, shaking her and asking her if she loved him and why she wanted him to go on their honeymoon night. He also expressed the possible danger of facing the strong Mughal army. Hadi Rani immediately replied that if she were to stop him that night, she would forever create a stain on Rajput valor and that people would never forgive them. She also said that only cowards were afraid of dangers and the brave face every danger valiantly and at ease. She persuaded and pressurized him to go. Rao Ratan Singh thus left with his forces towards the approaching Mughal army.

In this context, Lindsey Harlan in The Goddesses’ Henchmen: Gender in Indian Hero Worship describes how Rajput women played an instrumental role in Rajput history and – “if a Rajput man can frighten lions, a Rajput woman can ‘roar like a lioness’; it then identifies Rajput women as ‘the secret of Rajput honor, also quoting example of Hadi Rani as an “exemplar of Rajput feminine virtue and wifely duty”. Here is the extract from the book:

Rao Ratan Singh, who started off with his army, was so distracted by his wife’s thoughts and her beauty that he stopped. He could not advance further. He sent one of his trusted lieutenants back to the palace with a message. He wanted to carry a momento from his wife as a token of love to the battlefield. The lieutenant arrived at the palace and delivered Rao Ratan Singh’s message to Hadi Rani.

When the Hada Chauhan Rajputani, now a Chundawat queen, learnt how distracted her husband was, she could not digest the fact that he wanted a momento at an odd hour – at a time when he should be galloping fast towards the approaching enemy. Something immediately clicked her mind. She ordered her maid servant to bring a sword and salver. The maid servant obeyed.

The lieutenant soon reached the spot where Rao Ratan Singh was waiting with his army. The Chundawat warrior’s face brightened up as the salver covered with the red cloth came into view. He waited impatiently for the momento to be delivered to him. When he removed the cloth he was dumbfounded to see his queen’s head. He realized his fault and regretted. But he had to keep his queen’s words. He had to fight the enemy bravely. With renewed vigor and with the lifeless Rani tied around his neck by her hair, Rao Ratan Singh marched towards the Mughal forces.

Lindsey Harlan in Religion and Rajput Women draws a symbolism of Hadi Rani’s sacrifice citing jhumjhar metaphor. To quote from this book, “When a jhumjhar ‘s head survives its body, it may roll a great distance in order to achieve an auspicious destination, which is then marked by a shrine. Similarly, Hari Rani’s head travels about to attain its end, her husband’s glory. This comparison also hinges on the male-female inversion, for Hari Rani’s head does not animate the body from which it is severed but the body to which it is offered—the body of her husband. The symbolism of three types occurs: substitution, combination, and sacrifice.” Here is the extract:

Extract from ‘Religion and Rajput Women’ by Lindsey Harlan

In the battle that followed, a devastated but nevertheless proud Rao Ratan Singh attacked the Mughal forces like a wounded fiery lion. He fought bravely, slaying fast the Mughal soldiers one after another. The Mughal forces retreated and fled. He thus achieved his goal, gaining victory for Mewar and facilitating Prabhavati’s marriage with Maharana Raj Singh I. Now that his goal was met, he desired no longer to live, for he longed Hadi Rani’s presence. He got to his knees and with his sword severed his neck from his body.

Here is an extract from ‘Religion and Rajput Women’ by Lindsey Harlan on the story of Hadi Rani: 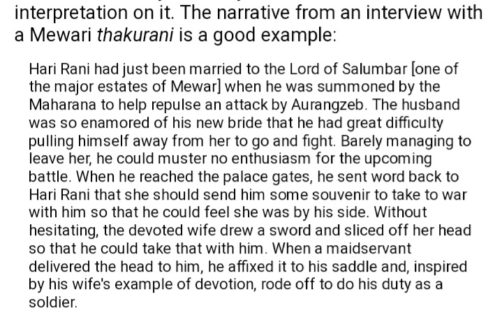 Extract from ‘Religion and Rajput Women’ by Lindsey Harlan

Had Hadi Rani not sacrificed her head, Rao Ratan Singh would have continued to get distracted in battle which might have proved otherwise for the Mewari army. A bow to Hadi Rani for setting an example of sacrifice, valor, and duties of a wife!

4. Indian Poetry: Modernism and After : a Seminar by Saccidanandan.

A History of Head Coverings in India: Turban and Head Veil/Ghoonghat