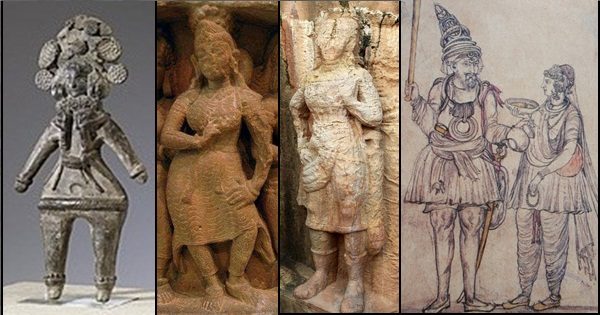 There is an attire of antiquity, which, although is a sight of the usual, is a magnetic bearer of a rich history stretching over millennia. This three-piece costume is not only a wanted garment of convenience for the general working ladies all over the country, (rather subcontinent), but is also the garb of finesses and grace. Yes, that’s right- it’s the Salwar Kurta.

Having my roots in Punjab, I grew up just knowing the fact that the Salwar Kurta was the cultural dress of my region. A cultural dress, that was ‘introduced’, as ‘they say’ to the people of that region by the ‘great’ Mughals. However, even I, at that point of time, could not have been more wrong. Here is a brief historical analysis that proves that this traditional costume – the Salwar Kurta, has its roots in ancient India and not introduced by Mughals. 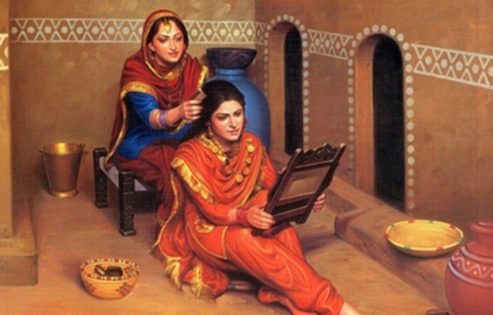 The Kurta, as everyone knows, is a stitched tunic-like shirt, which has slits on both the sides, and one with a frontal opening. Now, when we are taught repeatedly that stitching was an uncommon phenomenon or practice during ancient India, thinking about a Kurta existing way back then around 1000-800 BC, would certainly seem like a misguided thought. However, excavations and artifacts say otherwise.

The earliest relics indicating the widespread practice of the art of stitching was during the Indus Valley Civilisation of the northern and north-west Indian subcontinent, were needles and buttons. Therefore, it is a corroborated fact that stitching was well known to the Indian lot from the time-span of roughly 6th to 3rd Millennium BC, if we take the Mehrgarh settlements into consideration, which were essentially the precursors of Harappan culture. It has been quite accurately assumed that the Harappans wore unstitched drapery clothing such as the simple shawl and knee length skirt, or even the initial diagonal drape of a saree, as well as stitched clothing like the sleeveless or half-sleeve kurta and straight-cut and baggy trousers. 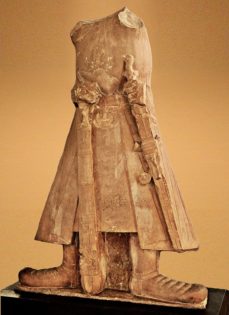 Statue presumed to be that of a warrior, probably from the Kushan Empire era (circa 30-375 AD) wearing an Achkan; Image source: Wikimedia

Coming to the Post-Harappan, Vedic era, around the relatively earlier half of the 3rd Millenium BC, when the oral tradition of the Ved were presumably first documented through written manuscripts, it is widely observed that the embroidered or printed veil or Adhivastra, finds mention in the Rigved.

Furthermore, the AtharvaVed, which too was first composed in the same early 3rd Millennium BC, also states the presence of an upper garment called Vavri has been mentioned, along with a shawl-like garb for the torso known as Uttariya. Therefore, this reaffirms the fact that ancient Indians continued to wear the stitched upper garment in the Vedic era, which was different than the Uttariya shawl. (Note: chronology/dating may well predate what is mentioned here going by fresh research on Indian chronology.) 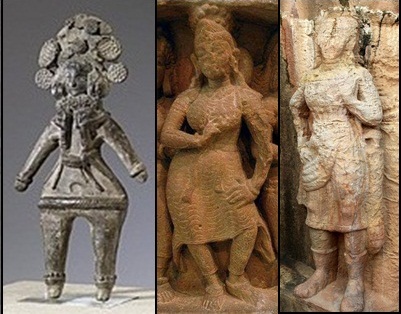 Left Image: statue of the Mother Goddess from Mathura, from the 2nd Century BC. Observe the uncanny resemblance to the Harappan Mother Goddess figurines which were at least two thousand years older than this one, which prove the Indus-Valley Civilisation’s culture to be the same as the Vedic Culture of the Indian subcontinent, indicated though the identical art form being practised two millennia later. Middle Image: Gupta era sculpture of a lady fwearing a side-slit Varbana (ancient form of Kurta), and Svasthan trousers below. Right Image: Ancient statue from 3rd Century BC in Udaygiri and Khandagiri Caves, Odisha, displayed wearing a long, robe-like garment, which is Angarkha, or the Achkan; Images source: Wikipedia and Google.

Hence, if we were to classify, ancient Indian stitched upper body garments were of roughly four types:

1. The Varbana: an almost knee-length garment with side slits, either half or full-sleeved, the ancient precursor of the Kurta.

3. The Choli: the stitched blouse worn above a saree. This was in wide use in the South too.

4. The Achkan or Angarkha: Long, flowing, coat-like robes, which were ankle length and often full-sleeved, with no side slits. These gradually evolved into the Anarkali that we know today. 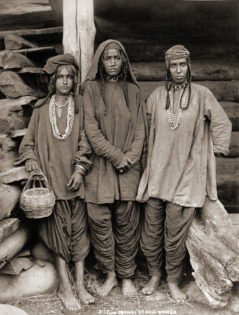 A trio of Kashmiri women wearing the Suthan with
Phiran on top; Image source: Wikipedia

Evidences supporting the fact of these garments have been found:

1. A bronze rattling mirror from the 4th-5th Century BC during the Pre-Mauryan era has been discovered which portrayed ladies wearing a tight-fitting, either chest-sized Choli or waist-length blouse that is a variant of the Kurti.

2. A statue from the 3rd Century BC Udaygiri and Khandagiri Caves in Odisha denotes a possible warrior wearing an achkan or an ancient angarkha (a knee length or ankle length long Kurta, unslit). Hence proving that such an apparel had been in use for a considerable period of time, especially in the North.

3. Thirdly, a figure of a lady, presumably from the Gupta Period, wearing a long Varbana and a set of trousers.

4. The Achkan or the Angarkha, was in vast use during the Mauryan and Gupta rule, mostly in Northern India, due to its climatic circumstances, and a few references made in the RigVed in the section of the Battle of the Ten Kings (an intriguing episode of the RigVed), refers to the kings, either some of the lot or all, wearing ‘white robes’ and riding on horseback. Hence, dating the existence of such an attire to the transmission period between the Harappan-Early Vedic and the Vedic Era.

The use of the this attire could have very well been in existence in the Mohenjo-Daro civilisation as well.

As already mentioned above, the practice of wearing stitched lower garments were in observation since the Indus-Valley Early Vedic cultural times. 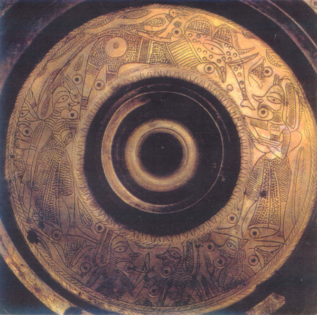 The first recorded Sanskrit word for fitted trousers was Svasthan.

Now, the Svasthan was almost like the cultural emblem of the North. Loose from the top and tight from down the knees, this uncommon and highly unique garment was widely worn by the nobles and the ruling classes especially of the North, as its sturdy composition was ideal as a combat apparel. Even the common public of North, primarily North-west Indian subcontinent started wearing it since the Harappan times as it portrayed a rare, distinctive aesthetic, apart from acting like a proper protective gear from the harsh yet loved North-Indian winters.

Now where exactly in North India did the Svasthan first emerge, is quite difficult, rather impossible to say, because sculptures from all across the the Northern landscape have depicted gentlemen and ladies wearing it.

However, the continuance of the Svasthan till modern times majorly amongst the commoners of the Pan-Indian state, which extended from the easternmost reaches of Bangladesh to the westernmost edge of Afghanistan, is seen in the North-western regions of our subcontinent and country.  Yes, the Punjab region. 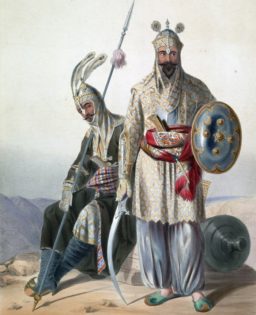 Afghan soldiers of the Durrani Empire (1747-1826) wearing the Khet Partoog; a Pathan version of the Salwar Kurta, of which the Partoog (the lower garment) descended from the Salwar, which in turn is the progeny of the ancient Svasthan; Image source: Wikimedia.

The prim Sanskrit Svasthan, was eventually embraced as the more colloquial, endearingly addressed Prakrit Suthan. The sharp Sanskrit pronunciation, was now modified into the simplistic, rural, earthy version of itself, with the difficult ‘sva‘ transformed into the simple ‘su‘. And there we have the finery that became the identity of the land of Punjab.

The Suthan has primarily four variations:

1. The fully tight, pleated one: In this kind, the entire Suthan was somewhat tight from top to bottom, and was covered in numerous pleats.

2. The Knee-below tight kind: This type resembled the main form of the ancient Svasthan, which was loose from the top and tight with pleats at the calves and ankle.

3. The tight-ankled kind: This form was extremely loose and baggy from the top and tightened from a little above the ankles.

4. The Salwar kind: Loose and baggy throughout with pleats and slightly tapered at the ankles. 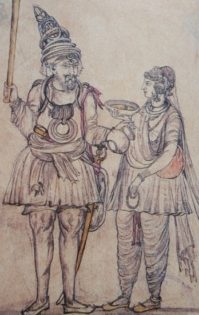 A 19th Century sketch of a Nihang Sikh and a Punjabi lady, wearing the Kurta-Suthan; Image source: Wikimedia.

Note: The ancient Svasthan also had variations. They weren’t just tight at the calves, but also at the ankles and loose upwards. This version is what inspired the Afghan Pashtun Partoog; which is a very baggy Suthan, looser than the Punjabi kind, and tapered at the ankles, since ancient times.

The Punjabi Suthan, mostly the kind that was ankle-tight, was the cherished, staple attire of all those who hailed from the land of the five rivers, especially women, which they gracefully paired with their profusely embroidered kurtas and those vibrant Phulkari dupattas. So much so, that this beloved costume even finds mention in a few of the songs of the folk song by the ‘Nightingale of Punjab’, Ms. Surinder Kaur.

The Punjabi Suthan, which we often call Suthana, adding that course, yet loving local touch, also has a sister up northwards, in the valiant Dogra community. The Dogra Suthan, is an inseparable feature of the traditional couture of the elegant Dogra lady, the jewel of Jammu. This kind is tight below the knees, but loose at the top. 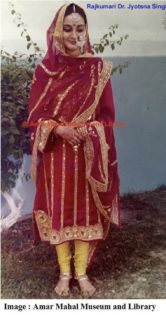 The Punjabi Suthan, as aforementioned, gradually gave birth to the much looser form of itself, probably in the medieval times, which was not tightenend at the ankles. This, upon the arrival of the Mughals in Punjab, was given the name Salvaar, as the invaders saw minute similarities between this loose style of the Suthan, and the bloated, baggy pants worn by the Ottomans of Turkey, which was also called Salwar.

Hence, despite having a complete native origin of Salwar Kurta, the name given to this garment was a foreign one, and has been called that ever since.

Thus, this wonderful finery – the Salwar Kurta, can be undoubtedly regarded, as Punjab’s gift to the land of India. 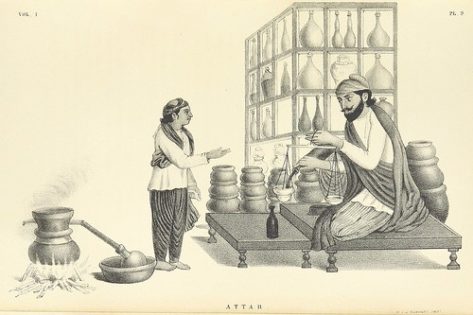 An 1852 sketch of a Punjabi lady in Kurti and Suthan visiting the Pharmacist, then called the Attar, somewhere in Punjab; Image source: Wikiwand.

1. Archaeological Congress and Seminar Papers: Papers Presented at the 4th Annual Congress of the Indian Archaeological Society and the Seminars Held at Nagpur on the 10th, 11th, and 12th Nov. 1970, Volume 4, Part 1970

2. Fashion Styles of Ancient India: A Study of Kalinga from Earliest Times to Sixteenth Century AD

3. Vassilkov, Yaroslav V. “Pre-Mauryan “Rattle-Mirrors” with Artistic Designs from Scythian Burial Mounds of the Altai Region in the Light of Sanskrit Sources”.

All images courtesy/source: Wikipedia and Google.