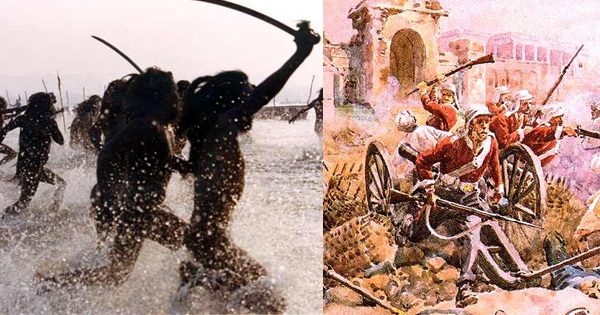 Sanyasi Rebellion! Many of us have hardly heard about this rebellion against the British by a group of wandering sanyasis, especially from 1770 to 1775 in British Bengal, especially today’s Bengal and Odisha. While colonial historians including few Indian historians labelled the sanyasis who revolted against British as ‘banditti’, ‘robbers’, ‘looters’, Bankim Chandra Chatterjee in his book Anandamath describes a true account of the rebellion citing a series of British records and letters. Few of these records include details of what Hastings wrote to George Colebrooke on 2nd February 1773, to Josias Du Pre on 9th March 1973, to Purling on 31st March 1775, to Lawrence on 30th March 1771 besides also quoting from Hunter’s Annals of Rural Bengal. Warren Hastings was the first de facto Governor General of India from 1774 to 1785. George Colebrooke was the chairman of the East India Company, Josias Du Pre the Governor of Madras from 1770 to 1773, John Purling the commander of East India Company, and Stringer Lawrence the first Commander-in-Chief of British India. These records and description by Bankim Chandra Chatterjee give us a glimpse of how ascetics revolted against the British, how they impacted the early phase of the colonial rule and how they were the subject of discussion among top British officials for several years. It was the song and slogan of ‘Vande Mataram’ depicted in Anandamath that inspired many freedom fighters to rise in rebellion and free the motherland from British rule.

In ancient and medieval India, kings donated villages to temples authorities in respective kingdoms wherein priests collected revenues from those villages for not only maintenance of the temples but also to run Gurukuls for primary education, hosting pilgrims, and for related socio-cultural activities in the temple premises. Ascetics also earned the patronage of the kings and ministers and later zamindars and traders for pilgrimage to shrines across the country. During the 1770s the British established their stronghold in the Bengal region and later Madras. They started collecting heavy taxes from the peasants, zamindars, landlords, and traders. Besides, the great famine that affected the lower Gangetic plain from Bihar to Bengal from 1769 to 1776 turned the region from riches to rags. The British proved harsher than Nature. They took away as tax whatever little the peasants cultivated, thus leaving them to die in starvation. This fury of Mother Nature combined with the barbaric policies of the British resulted in over 10 million deaths.

According to a report by Warren Hastings, then Governor General of British India, one-third of the population in the affected region starved to death. For every peasant family, it started with one meal a day, then half a meal, and then starving the whole day, followed by several days of starving and ultimately death. In such a situation tax collectors employed by the British levied more taxes on the poor starving peasants. To quote Bankim Chandra Chatterjee from his book Anandamath (translated version): 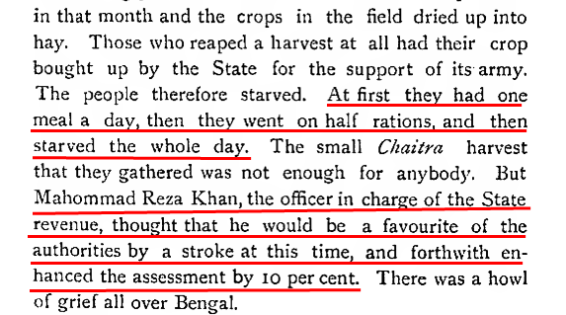 Here is a grim description by Bankim Chandra Chatterjee of the situation of the famine-affected people: “First, people began to beg. But soon there was none to give alms; —they then began to starve. Then they began to suffer from diseases. They sold their cattle, sold their ploughs, ate up the seed grains, sold their houses and their holdings, and at last their daughters and sons and wives. Then there could not be found buyers of men, everybody wanted to sell. They then fed on leaves, grass and weeds for want of other food; the lower classes and wild tribes fed on dogs, mice and cats. Many fled and died of starvation away from their homes. Those who did not fly away died from starvation or from diseases brought on by eating unwholesome food.” 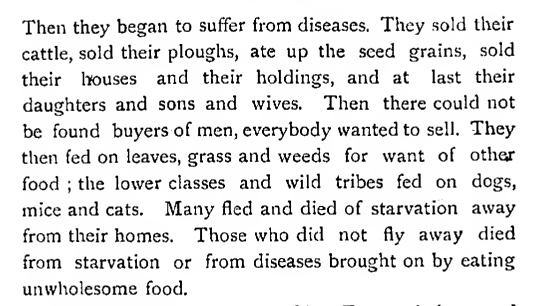 After British took control of Bengal, the landlords, zamindars, and traders weren’t able to give alms in cash and kind freely to the sanyasis for their pilgrimage. Whatever they gave came under the notice of the British. This act of donation irked the colonial masters. When they interfered, the sanyasis took action. They started slaughtering the British. This action came to be known as the Sanyasi Rebellion. Moreover, they hated the British looting the people and the country. Exploitation of the people of the region by the British even during famine further angered them. Most of the sanyasis came from the northern and western parts of the country to visit Jagannath temple of Puri – one of the char dhams and other pilgrimage sites.

The sanyasis, as described by Warren Hastings to Josias Du Prer, the then Governor of Madras dated 9th March 1773 were ‘mostly naked’. The phrase here can be interpreted both as ‘partly covering the bodies’ and ‘most of them being naked’. The naked sanyasis were undoubtedly Naga Sadhus. Among the Hindu ascetics, Naga Sadhus stay naked.  The antiquity of the existence of Naga Sadhus dates back to thousands of years. Literary records and folklore attribute their founder to Dattatreya, the incarnation of the Trinity – Brahma, Vishnu, and Mahadev. The Dashanami sampradaya of monastic tradition attributed to Dattatreya was organized into four mutts by Adi Shankaracharya. Besides the mutts, he also organized a section of warrior sanyasis to protect Sanatana Dharma. Later they came to be known as Naga Sadhus. They have no fear of death and their weapons have been the trishul, sword, stick. They also carry other weapons including musical instruments and conch shells. Their ash-covered bodies and matted locks differentiate them from other sadhus. A section of the Naga Sadhus were further reorganized by Madhusudana Saraswati of Bengal in the 16th century. They stayed naked and their role was to protect Hindus from tyranny of the Mughals.

The sanyasis have been described as wanderers with no homes or families, that they came to Bengal from as far as Tibet, Afghanistan, China. In short, the description about their whereabouts meant they came from the Himalayan region given the fact that the British then weren’t very much aware of the complete geography of upper Northern India. British records describe them as ‘the stoutest and the most active men in India’ and as ‘hardy, bold and enthusiastic’. Warren Hastings wrote thus to Josias Du Prer about the sanyasis,”The history of the people is curious. They inhabit or rather possess the country lying south of the hills of Tibbet from Caubul to China. They go mostly naked, they have neither towns, houses, nor families; but rove continually from place to place…”

In a letter to George Colebrooke, chairman of the East India Company dated 2nd February 1773, Warren Hastings wrote how a group of 3000 sanyasis (Hastings also terms them as fakeers) attacked the Pergona Sepoys who were steered by Captain Thomas near Rungpore (now in Bangladesh). He described how Captain Thomas was killed in action during the fight. Hastings also described the sanyasis, numbering in groups from 1000 to 10000, to be annual pilgrims who came to visit the Jaggannath shrine. He admitted and fretted the fact that the sanyasis were hailed more than they deserved by the people for their rebellion – ‘which has made them more talked of then they deserve’. Here is an excerpt of the same from Anandamath:

To Josias Du Prer Warren Hastings wrote that the sanyasis defeated two bands of Pergona Sepoys and ‘cut off’ the bands’ two commanders. Here’s the excerpt from Anandamath:

Warren Hastings described the sanyasis as ‘the Gipsies of Hindustan’. Such was the people’s reverence for these pilgrims that the British could not gather information about their movement. The British became alert after two of their bands were defeated by the sanyasis. Despite deploying people to gather intelligence about their whereabouts and despite passing rigid orders, the villagers stood united in not providing any info about them. Thus the sanyasis appeared from nowhere; to quote Hastings, ‘they often appear in the heart of the province as if they dropt from heaven’.

Warren Hastings also wrote to John Purling, the commander of East India Company dated on 31st March 1775 quoted in Anandamath. The letter is an evidence of how the sanyasis wreaked havoc on the British. Hastings wrote, “We have lately been much troubled here by hordes of desperate adventurers called Sannyasis, who have overrun the province in great numbers and committed great depredations.”:

After the successful defeat of two bands of Pergona Sepoys and ‘cutting off’ their two commanders, the sanyasis further troubled the British at different places. They then attacked British posts in different parts of Dinajpur and Rungpore provinces of Bengal. They came in several groups of 2000 to 3000 members each. The people, despite being subjected by British to the strictest orders of passing information about the sanyasis’ whereabouts, remained mute. The sanyasis attacked and defeated another detachment of British soldiers commanded by Captain Edwardes. They killed Edwardes and all the sepoys.  Edwardes tried to escape crossing a nullah, but in vain. Hastings labels the reverence of the people for the sanyasis as ‘superstition’. Here is an excerpt:

The Sanyasi Rebellion took a different turn. Groups of sanyasis then entered Purneah province (now in Bihar) and started plundering British-held villages and properties. Captain Brook was in-charge of that province. He had a newly raised battalion of light infantry. Before the British army reached the spot the sanyasis had already left. The losses incurred as a result of the plunder ‘inconsiderably’ affected the revenue of the British East India Company. According to Hastings, the sanyasis looted British treasury besides destroying more of their properties in other districts of Bengal, which also affected the overall revenue. The British then stationed troops in small detachments at various posts to prevent any future incursions by the sanyasis.

Attacks by the sanyasis continued throughout the year. The local people supported them, giving them refuge. According to Warren Hastings, zamindars also supported them. The British were able to expel sanyasis from the north eastern part of Bengal. Indians including zamindars who gave refuge to the sanyasis were ‘severely’ punished. He wrote about it to Stringer Lawrence, the first Commander-in-Chief of British India dated 30th March 1771 as quoted in Anadamath:

The sanyasis who revolted in Bengal attacking British army and posts were annual pilgrims. They did not stay at one place. Merchants also accompanied the sanyasis to visit the shrines. The Sanyasi Rebellion thus lost momentum in a few years with the sanyasis returning back to where they came from after visiting the shrines. But they were successful in defeating several bands of the British soldiers besides killing their commanders. They were successful in destroying British-held properties in the villages and plundering their posts thus severely affecting the revenue of the East India Company. The locals supported them and gave them refuge despite knowing how harsh the British were. But these series of victories by the sanyasis and how the Sanyasi Rebellion impacted the initial phase of the colonial rule don’t find a place in our history textbooks.

2. Enlightenment’s Frontier: The Scottish Highlands and the Origins of Environmentalism by Fredrik Albritton Jonsson.

Featured image courtesy on Sanyasi Rebellion (for representation purpose only): hinduhistory.info and YourStory.

Velu Nacchiyar: 1st Queen in the History of India to Win Battle against the British