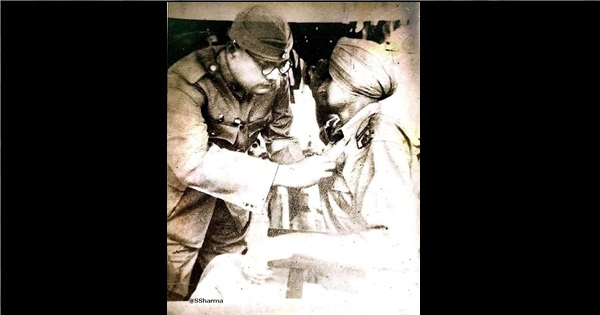 Shangara Singh Mann! How many of us know about this brave freedom fighter who killed 50 Britishers and injured over 36 in the INA battle in Assam against British in 1943? He was a Captain in Netaji Bose’s Azad Hind Fauz (INA).  He was badly wounded in the battle. Netaji Bose honored him with Sardar-e-Jung and Vir-e-Hind medals for his bravery. Col Dhillon, who was tried in Red Fort (famous as INA trials) was present in the ceremony when Netaji Bose himself pinned gallantry medals on Shangara Singh Mann (shown in image above).

It was the call of Netaji Bose’s ‘Tum Mujhe Khoon Do, Mei Tumhe Azadi Dunga’ appeal that attracted thousands of Indian Prisoners of War and civilians settled overseas to join the Azad Hind Fauz for India’s freedom. Bose managed to raise a huge army of over 60,000 soldiers in a foreign land! Many Indians donated huge amount of money for the formation and maintenance of Azad Hind Fauz. The son of an INA veteran says,  “My father joined Netaji Bose’s INA from Singapore. He donated a huge amount for forming of INA. Due to this, after freedom, our family was under severe poverty, and my father could not send me to school. I was brought up illiterate. I have seen some of my father’s friends who were INA soldiers. They all perished in poverty and their families have vanished.” Ironically, after Independence, the Nehru govt. completely ignored the INA soldiers (except counted few).

Netaji Bose established the Provisional Government of Free India, i.e. Azad Hind Govt. in Singapore on 21 October 1943. Its army was the Azad Hind Fauj. He allied with the Axis powers and his cause was also funded by Imperial Japan monetarily, militarily and politically. It was recognized by 11 countries including Russia. With Japan’s support, the Provisional Government of Free India had nominal authority of the Andaman and Nicobar Islands including parts of Manipur and Nagaland. And Azad Hind declared war against the Anglo-American allied forces on the Indo-Burma Front. They charged against the British forces in the Imphal-Kohima sector and Assam. After defeating the British defences in Kohima, they advanced further towards Moirang. From here they had to retreat owing to compromised supply lines and withdrawal of Japanese forces.

Shangara Singh Mann was a captain and company commander in the brigade of Col Gulzara Singh. He was a part of the INA battle in Assam against the British. Netaji Bose and his Azad Hind Fauz warriors were in Rangoon then. Following the orders of Bose, Shangara Singh Mann got into new uniform and proceeded with his company from Rangoon. He along with his men walked 1100 miles and without food for 10-15 days in a row and reached Assam. He carried an lmg and 12 bombs. 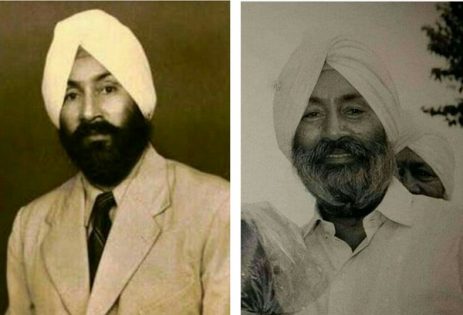 To quote Shangara Singh Mann, “I remember the day when our company had carried out the first assault on enemies in Assam. That time we had walked for 1,100 miles and had gone without food for 10-15 days in a row.”

The British forces and INA soldiers were spread all over. The assault continued. At one instance when Shangara Singh Mann and another soldier were exploring, looking for British camps, they were suddenly attacked. The soldier who was with him attained martyrdom. Shangara Singh Mann leaped into the bushes and took position. Bullets from the British flew over him and one of the bullets hit him on his right leg. He retaliated with non-stop firing and killed about 50 of the enemies besides injuring over three dozens.

To quote Shangara Singh Mann,”I began firing and must have slain about 50 of them and injured over three dozens.”

Most soldiers of his company were located around three miles away. Shangara Singh Mann trekked three miles of distance across the uneven terrain with his injured leg. There were no hospitals nearby and the  nearest hospital was located 36 miles away. INA soldiers carried him on stretcher for 36 miles to the hospital.

Shangara Singh Mann recalls how Netaji Bose himself had loosened his shoe laces when he reached Rangoon. Netaji honored him with Sardar-e-Jung and Vir-e-Hind medals. Mann was perhaps the only INA soldier to be awarded two gallantry awards together.

Later, in 1945, Mann was captured by the British. He was held in a prison in Multan from January 1945 to February 1946. He returned to his family in the Punjab only to soon shift place following the Partition of India. Thereafter, he settled in Vadodara. He remained in oblivion until 2001. 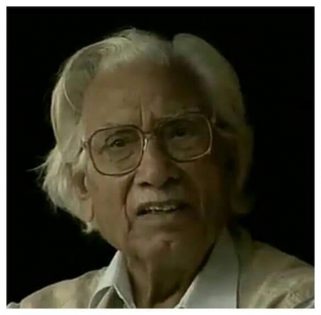 This is the valorous story of only one warrior of Azad Hind Fauz. 26000 Azad Hind Fauz soldiers sacrificed their lives in battle and while in action for the freedom of India. Ever since Independence, the aura in and around Bharat and beyond has been filled with ‘दे दी हमें आज़ादी बिना खड़ग बिना ढाल’ narrative – that Mohandas Karamchand Gandhi gave India freedom exploiting his non-violence weapon. Lakhs of freedom fighters revolted, fought and sacrificed their lives for the freedom we enjoy today. British archival records provide evidence of why British left India – because of the INA trials that led to mass revolt. Then how did non-violence give us freedom?

It is time we recognize all freedom fighters of Bharat! Jai Hind!!

Image and info courtesy: Shubham Sharma (great grandson of Maj KP Sharma, who led a mass revolt against British in Jabalpur following INA trials in Red Fort; Subham’s forefathers were in Azad Hind Fauz). His Tatuji was Col Dhillon who was tried in Red Fort, famous as INA Trials.