Contributions of Srinivasa Ramanujan to the Number Theory 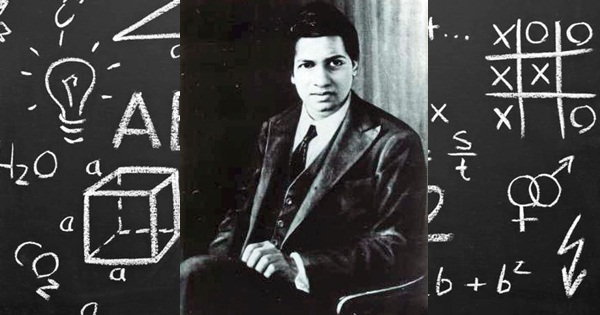 “An equation for me has no meaning, unless it expresses a thought of God.”

L. Littlewood described Ramanujan with the words `Every positive integer is one of his personal friends.’ The expression amply describes the heights in the realm of numbers to which Ramanujan rose. Here are few contributions made by Ramanujan to the number theory.

As a young student, Srinivasa Ramanujan was interested in magic squares. The simplest magic square problem is to fill up the cells in a square with 3 rows and 3 columns with the numbers 1; 2, 3, …….. , 9 such that each row sum = each column sum = each diagonal sum. One can find the following solution:

In this magic square, each row sum = each column sum = each diagonal sum = 15. This magic square requires an understanding of how 15 can be written as a sum of 3 non-repeated numbers. One can think of magic squares of types 4 × 4, 5 × 5……..: Ramanujan gave the following formula for a general magic square of type 3 ×3:

Where A, B, C (respectively P, Q, R) are integers in arithmetic progression. The following formula was also provided by him.

Denoting the number of partitions of n with parts ≤ m by pm(n) we have the recurrence relation pm(n) = pm-1(n) + pm( n –m ) (1 < m ≤ n). About the partitions of a natural number, G. H. Hardy and E. M. Wright remarked in [5], “in spite of the simplicity of the definition of p(n), not very much is known about its arithmetic properties”. Under this back ground, it is worthwhile to consider the contributions of Ramanujan.

n a natural number is said to be composite if it has a divisor different from 1 and itself. Ramanujan raised an interesting question: If n is a composite number, what makes it a highly composite one? For this purpose, he considered the number of distinct positive divisors of n denoted by d(n).

For the transcendental number π Ramanujan has given several formulae. Some of them are listed below:

Ramanujan gave the general solution of this equation as

Srinivasa Ramanujan considered the Diophantine equation xy = yz. One can observe the symmetry of this equation in x and y. Ramanujan proved that this equation has only one integral equation i.e., x = 4 and y = 2 and there are an infinite number of rational solutions.

The Utility of Ramanujan’s Equation

[1] R. Alter, On a Diophantine equation related to perfect codes, Mathematics of

[4] E. L. Cohen, On the Ramanujan-Nagell equation and its generalizations in Number

Theory: Proceedings of the First Conference of the Canadian Number Theory

[5] G. H. Hardy and E. M. Wright, An Introduction to the Theory of Numbers, Oxford

[6] R. Kanigel, The man who knew infinity, A life of the genius Ramanujan, Washington

I owe my gratitude to Manoshi Mam, Mohit Sir and Bandana Mam for their immense support.

Disclaimer: The research done are solely pertaining to the author. My India My Glory does not assume any responsibility for the validity or information shared in this article by the author.