An Open Letter to Jignesh Mevani on Manusmriti and Caste System 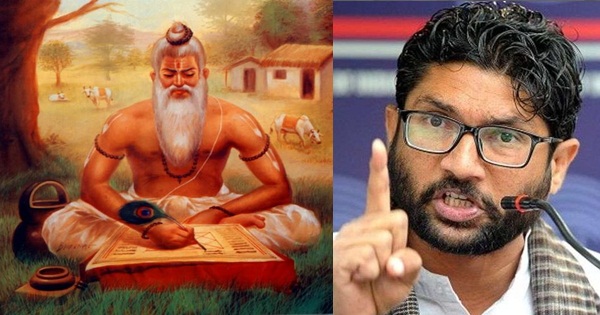 Dalit leader Jignesh Mevani asked in Delhi Rally to choose between Manusmriti and Indian Constitution. I am 100% sure that he and other people like him have never ever read Manusmriti. Boasting aloud is only what they know. I challenge Jignesh Mevani to read this article and then give his opinion about Manusmriti. Let him come and debate on MANUSMRITI. I challenge him for this noble cause.

Let the readers decide what they will choose between Indian Constitution and Manusmriti after reading this article.

Swami Dayanand, the great Vedic scholar of the 19th Century, writes: “I believe in that part of Manusmriti which is not interpolated (appended later) and is in accord with the Vedas.” He concludes that the Manusmriti we read today is not as originally laid down by Swayambhu Manu, the first Chief of Humanity. As it now is, he found the text as self-contradictory and against the values espoused in Vedas, and hence injudicious. He therefore rejects those prejudicial texts which advocate discrimination against populations with alleged inferior status.

Truth is that Manu proposed Varn Vyastha — which was based on merit and not on account of one’s birth.

Here are the verses from Manusmriti which says that Varna is based on qualification not on the basis of Birth.

2/157. As an elephant made of wood, as an antelope made of leather, such is an unlearned Brahmana; those three have nothing but the names (devoid of virtues respective to their kind).

2/28. This (human) body is made fit for (union with) Brahman by study of the Vedas, by vows, by burnt oblations, by (recitation of) sacred texts, by (acquisition of the) threefold sacred science, by offering (to gods, sages and manes), by (procreation of) sons, by great sacrifices, and by (the Srauta) rites.

(The above texts lays the qualifications to be acquired, with great dedication and effort at specified works, in order to become a Brahmin, and not merely by being born to a Brahmin father.)

The Varna of a person (caste or status in society) was decided after completion of his education.

Two births were considered for a person in Vedic period : first, when he was born to his parents, and, next, when he completed his education with due thoroughness. It was after second birth (twice born) that the Varna of person was determined.

The following text from Manusmriti makes it even more clear.

2/148. But that birth which a teacher acquainted with Vedas entire, in accordance with the law, procures for him (the student) through the Savitr (Sun), is real and exempt from his birth, age or death.

2/146. Between him to whom one is physically born and him who gives (the knowledge of) the Vedas, the giver of the Veda is the more venerable father; for birth through arising in the knowledge of the Veda (ensures) eternal (reward) both in this (life) and that (afterlife).

A person who remained uneducated and devoid of the knowledge of Vedas was considered a Shudra. That is, the Shudra Varna was not based on birth but on merit.

10/4. Brahmana, Kshatriya and the Vaisya castes (Varna) are twice-born (educated) but the fourth, the Shudra, has one birth only; there is no fifth (caste).

2/172. He who has not been initiated with teaching of the Vedas is like a Shudra.

Manu also advises not to insult a person of lower Varna:

1/31. But for the sake of the prosperity of the worlds he caused the Brahmana, the Kshatriya, the Vaisya and the Shudra Varna origin in form of the body of the society : as its mouth, its arms, its thighs and its feet, respectively.

(Only the ignorant consider the Shudra as being originated from the feet of God.)

1/87. But in order to protect this universe He (God), the most resplendent one, assigned separate (duties and) occupations to those as done in a body by mouth, arms, thighs, and feet.

1/88. To Brahmanas He assigned teaching and studying (the Vedas), sacrificing for their own benefit and for the welfare of others, giving and accepting (of alms).

1/89. The Kshatriya he commanded to protect the people, to bestow gifts, to offer sacrifices, to study (the Vedas), and to abstain from attaching himself to sensual pleasures;

1/90. The Vaisya to tend cattle, to bestow gifts, to offer sacrifices, to study (the Vedas), to trade, to lend money, and to cultivate the land.

1/91. One occupation only the Lord prescribed to the Shudra: to serve these (other) three castes.

Manu considered anyone who is without knowledge or capacity for skilled deeds as a Shudra. So any uneducated person is fit only for being in the service, under the guidance, of others who have the requisite knowledge and skills.

Isn’t that how we are organised even today?

Manu also advises people to exert in order to acquire a higher Varna, and change his or her allotted Varna. The advisory leaves Varn Vyastha changeable, fluid, and not based on birth but on merit alone.

10/65. (Thus) a Shudra attains the rank of a Brahmana, and (in a similar manner) a Brahmana sinks to the level of a Shudra; and know that it is the same with the offspring of a Kshatriya or of a Vaisya.

9/335. (A Shudra who is) pure, accompanies his betters and is gentle in his speech, free from pride, and always seeks a refuge with Brahmanas, attains a higher Varna (Brahmana, Kshatriya or Vaisya) based on his qualities.

4/245. A Brahmana who always connects himself with the most excellent (ones), and shuns all inferior ones, (himself) becomes most distinguished; by an opposite conduct he becomes a Shudra.

Is it not said : the company one keeps makes a man better or worse ?

2/103. But he who does not worship in morning, nor in the evening, is like a Shudra and he shall be excluded, just like a Shudra, from all the duties and rights of an Arya (one of noble qualities).

2/168. A twice-born man who, not having studied the Vedas, applies himself to other (and worldly study), soon falls, even while living, to the condition of a Shudra; and so do his descendants (after him).

2/126. A Brahmana who does not know the form of returning a salutation, they must not be saluted by a learned man; they must be considered as a Shudra.

A Sudra too can teach the other castes.

2/238. He who possesses faith may receive pure learning even from a man of lower caste (Shudra), the highest law even from the lowest, and an excellent wife even from a base family.

2/241. It is prescribed that in times of distress (a student) may learn (the Vedas) from one who is not a Brahmana; and that he shall walk behind and serve (such a) teacher, as long as the instruction lasts.

Superior rights given by Manu to Shudras.

2/136. Wealth, kindred, age, (the due performance of) rites, and, fifthly, sacred learning are titles to respect; but each later-named (cause) is more weighty (than the preceding ones).

2/137. Whatever man of the three (higher) castes possesses most of those five, both in number and degree, that man is worthy of honour among them; and (so is) also a Shudra who has entered the tenth (decade of his life).

In above text Manu gives respect to any Shudra who is in tenth decade of life. That is, anybody who lives long enough transcends the Varna Vyavastha.

3/116. After the Brahmanas, the kinsmen, and the servants have dined, the householder and his wife may afterwards eat of what remains.

Householders are advised by Manu to dine after Shudras or the servants !

8/335. Neither a father, nor a teacher, nor a friend, nor a mother, nor a wife, nor a son, nor a domestic priest must be left unpunished by a king, if they do not keep within their duty.

8/336. Where another common man would be fined one karshapana, the king shall be fined one thousand; that is the settled rule.

8/338. … that of a Brahmana sixty-fourfold, or quite a hundredfold, or (even) twice four-and-sixtyfold; (each of them) knowing the nature of the offence.

Manu advises strict punishment for a higher Varna : punishing the Brahmana many times more than a lower Varna, say, a Shudra.

The above text is evidence of Manu’s unbiased social hierarchy and structure. He considered a behavioural error as being more unpardonable in case of the learned one than for the ignorant.

Following are the examples of changing of Varn Vyastha in the past:

1. Rishi Brahma, son Manu Swayambhu himself, was born to a Brahmana but became a Kshatriya king.

4. Kavash Ailush was born to a Shudra and attained the highest Varna of a Rishi. He became mantra-drashta to numerous hymns in Rig Veda : 10th Mandal.

6. Matang became a Rishi after his birth in low Varna.

7. Maharishi Valmiki was born in inferior Varna and became a Rishi.

8. Mahatma Vidur was born to a Dasi (maid) and became the prime minister to king Dhritarastra.

There are many examples of Varn Vyastha to inferior level:

1. Ravan king of Lanka, who was son of a Brahmana Rishi Pultasya, became a Rakshasa.

3. Shri Ram’s ancestor, Raja Samar’s son, Asmanjas, was declared a Shudra due to his bad qualities.

Thus the real Manusmriti supports Varn Vyastha based on Merit not on the basis of Birth. The adulterated part is thus rejectable.