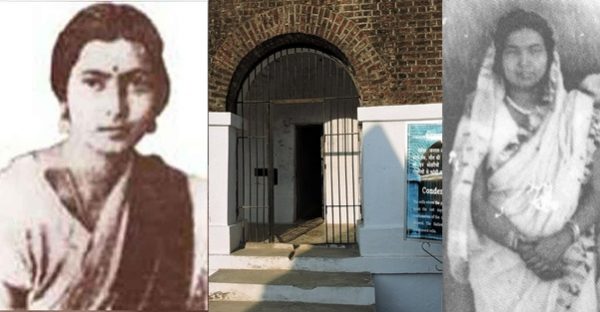 ′′Kalyani, so many young people gave up their lives in the quest for freedom; today their families are starving and dying in utter poverty. Our country is not doing anything for them. The young people of today do not know anything about these martyrs. Let me get well, and then both of us will write the history of their lives.” – Shobha Rani to Kalyani Das (Bhattacharjee).

Kalyani Das, Shobha Rani – these names of freedom fighters from Bengal might not be familiar to you. Shobha Rani was bed-ridden with paralysis for years which was a result of police torture all over her body inflicted on her during the freedom movement. Kalyani Das visited her regularly. One day, she uttered the above words after independence. Later she succumbed to those tortures by the British police. With her death, her dreams of penning down the history of the freedom fighters were gone! Kalyani Das later wrote about the nameless warriors in her book Jeebon Adhyayan, which was translated to English by Dhira Dhar titled A Study of Life and published by her son Jayabrata Bhattacharjee.

Do we really know about the hundreds and thousands of martyrs, who sacrificed their lives for the freedom of the country? Unfortunately a big NO! What a bed-ridden dying freedom fighter revealing the same and of the country not doing anything for the starving families of the martyrs exposes the grave injustice done to not only our martyrs (because they are nameless, unknown and are in obscurity in history textbooks) but also their families after independence. British had confiscated the properties of many freedom fighters, thus leaving no scope for their families for food and shelter. Nehru should have taken care of the same after assuming power.

Kalyani Das and her younger sister Bina Das were members of the Chhatri Sangha (Girl Students Association) where the elder sister served as its Secretary. It was Santi Ghosh, then aged 15 who co-founded Chhatri Sangha and was its secretary before Kalyani Das. Another Chhatri Sangha member Suniti Choudhury became an expert in the use of the dagger, sword, and lathi. She was recruited as the in-charge of training female members of the Chhatri Sangha in the use of weapons. She was also selected as the ‘custodian of firearms’. Both Santi and Suniti jointly assassinated Charles Geoffrey Buckland Stevens, a British bureaucrat and the District Magistrate of Comilla on 14 December 1931. They were sentenced with life imprisonment. 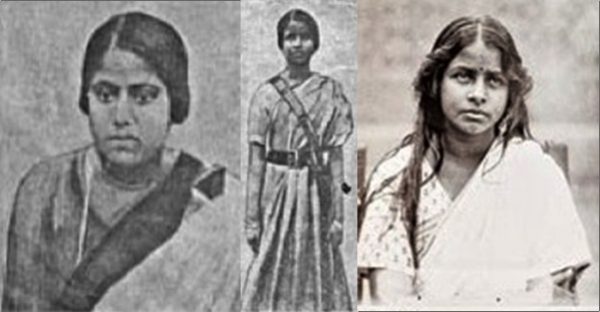 Chhatri Sangha was closely associated with the Jugantar Party, a secret group that masterminded the assassination of many British officers. Both Chhatri Sangha and Jugantar Party believed in the use of arms to drive the British out of India. Many members of Jugantar Party caught by British were arrested, hanged, or deported for life to Kaalapani, the Cellular Jail in the Andaman Islands. Training in the use of arms including pistols and the lathi continued in both the groups.

Arrest of members of the Chhatri Sangha, Jugantar Party and other groups of Bengal were a humdrum affair. On 6 February 1932, Bina Das attempted to assassinate Stanley Jackson, the Governor of Bengal in the Convocation Hall of the University of Calcutta. Kamala Das Gupta, a freedom fighter and trainer in the use of weapons, gave Das the revolver. Bina Das fired five shots but failed to assassinate the Governor. She was captured and sentenced with nine years of rigorous imprisonment. News hit the headlines related to this incident. Here is a news clip published in Glasgow Herald, dated 8 February 1932. Many other freedom fighters were also sentenced to imprisonment on suspicion. Her elder sister Kalyani Das was already in jail following her participation in the Civil Disobedience movement. 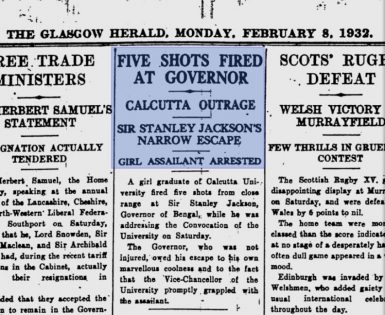 Rabindranath Tagore composed a poem titled ‘Kalyani’. Is this poem about her? When Bina Das was accused of the assassination and was about to be deported to Kaalapani in the Andaman and Nicobar Islands, Tagore wrote a letter to Kalyani Das in March 1932 with his telegram to CF Andrews asking him to exert his influence to save Bina Das from the transportation. 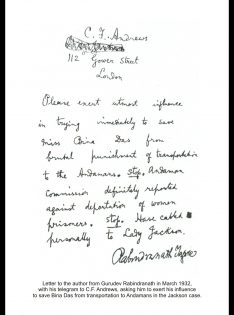 Rabindranath Tagore’s letter to CF Andrews asking him to exert his influence to save Bina Das from being transported to Kalaapani; Image source: Jayabrata Bhattacharjee, nephew of Bina Das

Kalyani Das Bhattacharjee has given a detailed account of her as well as other freedom fighters’ experiences in the prisons of Bengal in her book Jeebon Adhyayan. This book was translated from the Bengali original by Dhira Dhar titled A Study of Life. Dr. Kalidas Nag, who has given a preface to this book writes,

‘Kalyani Das (Bhattacharjee) is the elder sister of Bina Das. But that is not her only identity. The two daughters of Acharya Beni Madhab Das were in the forefront of the freedom movement when women first realized that they too must pay the price for freedom. Why should only men make sacrifices? Women too have the same right. Did they learn of this “mantra” of equality from the teachings of Brahmananda Keshub Chandra Sen, who was going round the city chanting songs of divine glory? They were school-girls at the time of the 1921 movement. But as they entered college they emerged as true partners of men in the fiery battle for freedom. Kalyani passed through so many trials and tribulations, along with her younger sister.’

‘…In Kalyani’s book we find new matters for thought. The contribution of the very ordinary and uneducated women was not negligible at all. I was filled with wonder by the profiles of so many women ….from different social strata, brought into sharp focus against the background of the jails.’ 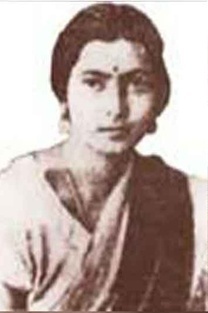 In the words of Kalyani Das Bhattacharjee, ‘Deshabandhu Chittaranjan had described India, under British rule, as one vast prison, where everyone was a prisoner. Heartless rules and regulations are like iron walls that block off all the light and fresh air outside.’

‘The first thoughts to cross my mind as I entered the jail were: “Humanity has never been so humiliated and outraged as it is in prison.” Here, every moment a person is being degraded and insulted. The worst criminal has to be treated with human dignity. Only then is there hope for redemption. In our country, jails are there for human torture, where thousands of prisoners are being sacrificed every day. No wonder, we hear of numerous prisoners killing themselves in order to escape from the inhuman treatment meted out to them in prisons. From the pages of Nirbasiter Atmakatha (“The Memoirs of an Exile”), we learn how so many prisoners in the Andaman Cellular Jail went so far as to commit suicide in prison, in order to escape from the horrors of their prison life.’

‘Inside prison, we found abysmal darkness and penury all around. Not the slightest smile on anyone’s face, as if spring had never touched their souls. Only deadly dreariness all around. Nature in all her glory of blossoming flowers and moonlit nights pass them by as prisoners continue to live under the burdensome shroud of misery. They know neither laughter nor tears. Nor do they have the power to raise their voice in a storm of protest to shake the walls of prison. The prisoners are deaf, dumb and blind. They reminded us of the lines:’

“Centuries of suffering writ large on their face,

Doomed to plod on, and carry on their shoulders

An ever-increasing load , till their last living breath”

Here is Kalyani Das Bhattacharjee’s personal experience of her imprisonment with other freedom fighters in Presidency Jail, Kolkata:

‘In December of 1931 I was imprisoned for eight months for participating in the Civil Disobedience Movement. The trial took place in a room in jail. We were not told why, instead of being tried in open court, we were tried in such secrecy. As under-trial prisoners we were taken to the Presidency jail.’ 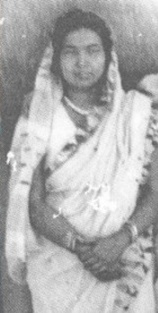 ‘It was winter when I entered prison for the first time. As under-trial prisoners we were allowed to carry our own beddings. After walking some distance and passing many gates, we finally reached the Female Prisoner’s ward where an Anglo- Indian matron took charge of our belongings and welcomed us with a smile. She seemed to be a nice person. A little later we were placed in a big room and the iron doors were locked for the night. It was already night according to the jail timetable, though there was bright daylight outside. This was the first shock we received as prisoners. In the midst of light we were locked into darkness. We could imagine all the activities that were going on in the outer world. Groups of young boys and girls walking along the streets, some to the playground, others may be to the park for some fresh air or to the movies with friends. This twilight hour in the evening throws a pall of sadness on the prisoners. In silence we used to stand as the doors were locked. Then, gradually, the mellow shades of evening calmed us as we sang,

“You have come clothed in glory this evening, I bow to thee!”’

On our first evening in prison, when we were sitting in the dark, two aged ladies entered our room. We learned that one of them had crossed sixty, while the other was in her fifties. Being cast away from the loving embrace of parents and family we were hungry for some tenderness. We felt comforted in their presence. We were curious to know the history of their incarceration. The former lady we addressed as grandmother. She was a widow from a Brahmin family. She had courted imprisonment at the request of her grandson. Her young grandson was jailed for participating in the Civil Disobedience movement; before his departure he had asked his old grandmother to take his place in the struggle. He had placed his demand on the person nearest to his heart. The old grandmother had no conception of independence; there was no ideological inspiration behind her action. It was just an act of love. We could visualize the beautiful bond that knit their souls together, and had drawn this old woman away from her life- long homely habits into the unknown world of strife. Her companion had come through political motivation. It was the call of “Bande Mataram” that had brought her out of her home. Later that night two more teenage girls were arrested from Howrah and brought to our room. Their names were Sushama and Surama.’

Key Ref: Jeebon Adhyayan by Kalyani Das Bhattacharjee; Translated from the Bengali Original by Dhira Dhar titled A Study of Life and published by Jayabrata Bhattacharjee.