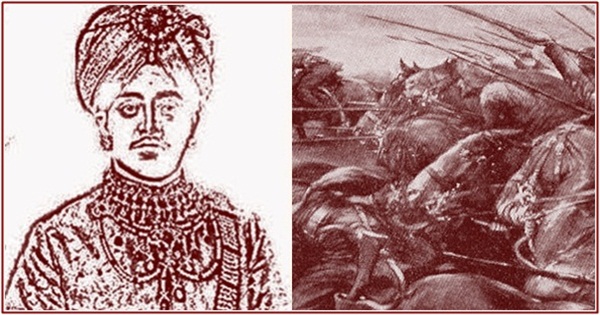 Think of the world’s largest delta formation – the Ganges-Brahmaputra delta system and you will be transported to the terrain of Bengal. This region, once known as Gangaridai, had extensive trade networks and shipping links with ancient Greece, Arabia, and other international cities. Bengal has been a sea-faring region since antiquity and home to several major Janapadas (kingdoms). Ancient kingdoms of Pundra, Magadha, Suhma, Anga, Vanga, Samatata and Harikela wove sagas of glory here, so did the Mauryas and Guptas. Shashanka, a local Bengali ruler, united the kingdoms of Bengal for the first time after the Gupta rule only to be collapsed and reunited again under Gopala. The region remained under the Pala Empire followed by Chandra, Sena and Deva dynasties. Hindu Maharajas of Chandradwip and Cooch Behar established their supremacy for some time until the Bengal Sultanate took over.

Muslim rule in Bengal started in 1204 AD with Bakhtiyar Khilji plundering and capturing the region. The Khilji dynasty survived till 1227 until it fell under the Mamluk Sultanate with Nasiruddin Mahmud as the founder. This was followed by the Balban dynasty of Muslims from 1281 to 1324. Ghiasuddin Tughlaq conquered Bengal in 1324. The region was then administered by Governors of the Tughlaq Sultanate till 1339. From 1338 to 1332, independent Sultans ruled Bengal. This was followed by establishment of supremacy by the Illyas Shahi dynasty founded by Shamsuddin Ilyas Shah in 1352. Raja Ganesha re-established Hindu supremacy in Bengal in 1414, seizing the throne from the Illyas Shahis.

Who was Raja Ganesha? How did he capture the throne of Bengal? How did he establish his superiority and Hindu dominion in a region dominated by the Muslims for over 200 years?

Raja Ganesha was a direct descendant of the Deva dynasty of Bengal, whose families have been landlords since the time of the Palas and the Senas, spanning 400 years. ‘He wielded effective control over the rich lands running along the Ganges between modern Rajshahi and Pabna.’ Ganesha was also known as Danujmardandeva.

Muslim rulers sought the cooperation of elite Hindu landlords in administrative affairs. Ganesha was appointed by the Illyas Shahis in the Sultanate court as an officer of Pandua (now located in Malda).

Sufi saints of the Chisti and Firdausi orders, who championed a reformed and purified Islam, objected to the appointment of Hindus in administration. They insisted that the state’s foreign and Islamic identity should not be diluted by admitting Hindu Bengalis in the ruling class. Maulana Mujaffar Shams Balkhi, a Sufi of the Firdausi order, complained in a letter highlighting the issue addressed to the then Sultan Ghiyasuddin Azam Shah, also called Ghiyath-al-Din. In this letter, the Sufi Maulana termed the Hindus as ‘vanquished unbelievers’, especially targeting Ganesha of exercising political authority over the Muslims in Bengal. Ideologically, the Bengal Sultans aligned with the Middle East, but they did bank upon the local elite Hindus for political gains.

After the death of Ghiyath-al-Din in 1410, tensions between the Muslims and the Bengali Hindus intensified. Ghiyath-al-Din was succeeded by Saifuddin Hamza Shah, who ruled for a few months and was succeeded by Shihab-al-Din, also known as Shihabuddin Bayazid Shah. During Shihab-al-Din’s tenure, situations only worsened. According to an account by 16th century Persian historian Muhammad Qasim Firishta, Ganesha ‘attained to great power and predominance’ and became the ‘master of the treasury and the kingdom’. Firishta further wrote that after the death of the Sultan, Ganesha, ‘raising aloft the banner of kingship, seized the throne and ruled for three years and several months’. It was 1414. Arab chroniclers mention him as Raja Kans.

The book Riyaz-us-Salatin, a chronicle written in Persian language by Ghulam Husain Salim Zaidpuri in 1788 on the complete history of the Muslim rule in Bengal gives a slightly different account on how nobleman Ganesha of the Bengal Sultan rose to power as the king. According to this account, Ganesha killed Shihabuddin and seized the throne.

Though Firishta wrote about Ganesha as a just ruler, who did not harm the Muslims of his kingdom, Riyaz-us-Salatin portrays the opposite. According to this book, Raja Ganesha oppressed the Muslims of Bengal and slew a number of them. This led Chishti Shaikh Nur Qutb-ul-Alam write a letter to Ibrahim Shah Sharqi, the Sultan of Jaunpur, appealing him to invade Bengal and overthrow the Hindu king. A purport of this letter is found in Jaunpur.

With rising Muslim influence, Ganesha installed his twelve year old son Jadu to the throne of Bengal and himself became his Regent. In his absence in the court, Jadu exerted influence supported by other Bengali Hindu nobles. Ganesha was alerted of the possible invasion of Bengal by Ibrahim Shah. He approached Sivasimha, the king of Mithila for help. The combined army of Sivasimha and Ganesha tried to check the advancing army of Ibrahim Shah, but in vain. This alliance of the two Hindu kings is proven by an account by Mulla Taqyya, a courtier of Akbar and Jahangir.

When Ibrahim Shah’s army was about to reach Bengal, Ganesha pretended to seek pardon from Chishti Shaikh Nur Qutb-ul-Alam. At this juncture, the Chishti grabbed the opportunity of converting the Raja’s son Jadu to Islam. He converted him and renamed him as Jalaluddin Muhammad Shah.

Contemporary Arakanese accounts have recorded a completely different angle to the battle story. According to this account, Raja Ganesha defeated Ibrahim in battle. The king had given refuge to an Arakan ruler in his kingdom after the latter’s defeat by a Burman monarch. This Arakan ruler gave military advice to Raja Ganesha following which he defeated the Sultan of Jaunpur. Probably, during his absence from the court, Shaikh Nur Qutb-ul-Alam grabbed the opportunity of converting his minor son Jadu to Islam.

The Arakan version of Raja Ganesha winning a battle against Ibrahim is justified. It was true that Ibrahim attacked Bengal following a request by Shaikh Nur Qutb-ul-Alam to overthrow the Hindu king. Had Ibrahim not been defeated, Alam would have sought his help to imprison or execute Raja Ganesha. But that didn’t happen. Alam would not harm Ganesha’s son or object to his claim to the Bengal Sultanate, as he had been converted to Islam by him.

Raja Ganesha despised this act of the Chishti and no longer wished that his converted son continue the kingship. Hence, he declared himself as the king of Bengal. Going by the Arakanese account, this declaration seems null and void, as he was already the king of Bengal. Unfortunately, few servants of his converted son assassinated the king soon after. Jalaluddin Muhammad Shah, also known as Jalal-al-Din, was then restored to the throne.

Raja Ganesha ruled for nearly four years and re-established Hindu supremacy in Bengal. Muslim scholars eulogize Shaikh Nur Qutb-ul-Alam for his act of inviting the Sultan of Jaunpur, thus playing an instrumental role in rescuing Bengal from the usurper Kans. As per one account, Kans or Raja Ganesha executed Nur Qutb-ul-Alam’s son ulama Shaikh Anwar. This incident has been described as ‘unjustly persecuted and executed by Raja Kans’. As per Muslim chronicles, ‘Qutb-ul-Alam who thus can be said to have saved Islam at a critical moment in its history in Bengal; but for his intervention it might have met with the same fate as Islam in the Iberian peninsula in Europe’. This statement well corroborates the influence of Raja Ganesha in Bengal during his rule and how the Muslims dreaded the Hindu king’s supremacy.

Sultan Jalal-al-Din, the son of Raja Ganesha, who minted and distributed coins of lion motif as vehicle of Goddess Chandi described himself of his paternity in Arabic letters as bin Kans Rao, ‘son of Raja Ganesh’, thus proclaiming himself as a sovereign who was the son of a Hindu king.

Nalini Kanta Bhattasali in his book Coins and Chronology of the Early Independent Sultans of Bengal assumes that Danujamardanadeva was Raja Ganesha. According to his account, Danujamardanadeva issued silver coins in 1416–18 devoted to the feet of Goddess Chandi in Bengali script on the reverse. He also mentions that Ganesha’s converted son reconverted to Hinduism under the title of Mahendradeva. He maintained this title till he converted to Islam again for the second time. But these assumptions by Nalini Kanta Bhattasali are not accepted by other historians.

According to Historian Jadunath Sarkar, after the death of Raja Ganesha, the Hindu Bengali nobles of Bengal raised the king’s second son to the throne under the title Mahendradeva. Jalal-al-Din soon ousted his younger brother to become the Sultan of Bengal.  Raja Ganesha’s descendents ruled Bengal till 1435.

Featured image courtesy: Wikipedia and Grimshaw Origins and History (for representation purpose only).

1. History of the Muslims of Bengal, Vol 1 Mohammad Mohar Ali